I am posting this blog entry on 6 August 2018. At 8:15 a.m. local time, exactly seventy-three years ago, a Boeing B-29 Superfortress piloted by Colonel Paul W. Tibbets dropped an atomic bomb on Hiroshima. This is a fact. In three days we are going to commemorate the seventy-third anniversary of the atomic bombing of Nagasaki—yet another fact. There are many other indisputable facts about the Second World War: the German invasion of Poland, the siege of Leningrad, the Japanese attack on Pearl Harbor, the Allied landing in Normandy, the Warsaw uprising, the Battle of the Ardennes, and so on. And yet, in order to make sense of such facts, one must put them together within a narrative. And as soon as we attempt to do that, problems arise. The most basic of those problems could be formulated as follows: how should one narrate a complex, multi-dimensional phenomenon such as the Second World War? Anglo-American historiography has given one possible answer to that question: the Second World War can be represented through a narration produced by an all-encompassing gaze. Victor Davis Hanson (The Second World Wars: How the First Global Conflict Was Fought and Won, 2017), Antony Beevor (The Second World War, 2012), Max Hastings (Inferno, 2011), and John Keegan (The Second World War, 1989) have written outstanding histories of that conflict. An entirely different answer can be found in the three-volume The Cambridge History of the Second World War (2015), edited by John R. Ferris et alii, or in a two-volume history of that war edited by Alya Aglan and Robert Frank, 1937-1947: La guerre-monde (2015). Divided into thematic sections that contain a varying number of chapters written by different scholars, these two comprehensive works offer not a single, unified gaze of the war, but rather a multiperspective narrative. The methodological approach adopted by Ferris et alii and by Aglan and Frank attempts to reproduce and capture through form the many layers of the Second World War.

Ever since the end of the conflict, novelists have also struggled with that multiple dimension of the world war of 1939-45. Some have preferred to center on individual events or on one single front, such as the atomic bombing of Hiroshima (Yokō Ōta’s 1950 City of Corpses, or Tamiki Hara’s 1949 Summer Flowers), the invasion and conquest of an island in the Pacific (e.g., Norman Mailer’s 1947 The Naked and the Dead, or James Jones’s 1962 The Thin Red Line), the aerial bombardment of a city (e.g., Gert Ledig’s 1956 Payback, or Thomas Pynchon’s 1973 Gravity’s Rainbow), a battle (e.g., Vasily Grossman’s 1980 Life and Fate), a series of interconnected vignettes about the Eastern Front during the final months of the war (e.g., Heinrich Böll’s 1951 Where Were You, Adam?), specific acts of resistance to dictatorship in the home front (e.g., Hans Fallada’s 1947 Alone in Berlin), or the invasion and occupation of a country (e.g., Vercors’s 1941 The Silence of the Sea; Irène Némirovsky’s 2004 Suite Française). Other authors offer a more encompassing view of the war by narrating a complex set of events: such is the case of Evelyn Waugh’s 1966 trilogy Sword of Honor and, to a certain extent, of Louis-Ferdinand Céline’s 1957-69 so-called German Trilogy. But no writer, to my knowledge, has ever come close to portraying the multiple dimensionality of the entire war. No one, that is, until the publication of the ten-volume Sonar: A Collective Journal (1993-2005), a monumental 7,700-page collage by the noted German novelist Walter Kempowski.

Sonar is organized into two series of four volumes each, plus two additional single volumes. The first series, which saw the light of day in 1993, is Sonar: A Collective Journal, January and February 1943, and it covers the last month of the Battle of Stalingrad, among many other events of that period. The second series of four volumes, Sonar: Fuga Furiosa, A Collective Journal, Winter 1945, was published in 1999; it zooms in on the first two months of 1945, starting on 12 January with the beginning of the Red Army’s final offensive, and ending on 13-14 February with the Allied aerial bombing of Dresden. In 2002 Kempowski published what constitutes the ninth volume of Sonar, which bears the title Sonar: Barbarossa 1941, A Collective Journal, basically devoted to the first six months of the German offensive against the Soviet Union. Three years later the tenth and final volume appeared:  Swansong 1945: A Collective Diary of the Last Days of the Third Reich.

Walter Kempowski’s magnum opus is a collage of thousands of texts written by a wide variety of people. Kempowski’s figurative sonar explores the depths of memory and history, detecting and reproducing the voices of—to give you just a sample—officers of all ranks and enlisted men, members of the SS, conscripts of the Red Army, American GIs, dictators, ministers, war refugees, civilians trapped in front-line positions or bombed out of their homes, men and women trying to survive in besieged cities, prisoners of war, famous writers and painters who analyze the war in their journals or private correspondence, and world leaders who meet to discuss the war. The genre of the texts is equally diverse: in Sonar Kempowski puts together photographs and passages from personal diaries, unpublished memoirs, communiqués, memoranda, telegrams, newspaper articles, restaurant menus, radio programs, train schedules, public speeches, poems, interviews, and cemetery records, among other kinds of documents. Such variety of authors and genres entails, it goes without saying, the presence of many linguistic registers. Kempowski overlaps thousands of voices with great virtuosity, and places them in conversation thanks to the main organizing device of Sonar: its division into journal entries. Instead of traditional chapters, Kempowski organized his book by days, as if it were a journal. Each journal entry includes passages written that day or produced about that specific day. Before each individual passage, Kempowski includes the complete name of its author, the dates of the author’s birth and death, and the place where the text was written or on which the text is written. There are no authorial interventions, and it is up to the reader to draw an ethical message from Sonar. 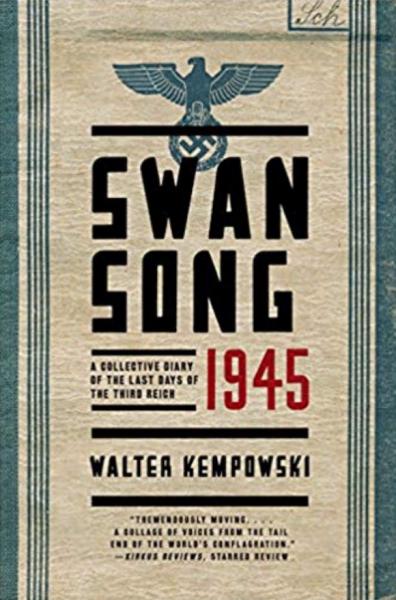 In Sonar Kempowski provides one of the most compelling responses ever produced to the impossible challenge that world war poses to epistemology and representation. He puts into practice what one may call a poetics of total representation: both the construction and contents of his work reproduce the structure of the total war fought in 1939-45. Until recently, Kempowski was a territory reserved to Germanists and German-speaking readers. Shaun Whiteside’s splendid English translation of the tenth volume of Sonar, Swansong 1945: A Collective Diary of the Last Days of the Third Reich, published in 2015 by W.W. Norton, makes it accessible to a wider reading public a fascinating representation of war. As a scholar of war writing, I’d always found surprising that such a creative global rendering of the Second World War had for so long remained within the confines of those who can read German. It is to be hoped that other publishers will soon follow suit and undertake the translation of Sonar (or at least of one of its two single volumes) into other languages. Reading Kempowski’s multi-volume work can change a reader’s ideas about how best to represent modern warfare. Sonar provides readers with a unique adventure—the adventure of exploring one of the most complex collages ever attempted, the adventure, in sum, of viewing many of the multiple layers of the Second World War, not through the lens of an omniscient historian, or a group of historians, but rather through a symphony of voices, masterly orchestrated by Walter Kempowski.

To be sure, Kempowski’s Sonar does not sound out all war-related events. While it covers battles from the war in the Pacific (in Sonar: Barbarossa 1941, for instance, Kempowski gathers many documents on the Japanese onslaught on Pearl Harbor) and other theaters of war, this ten-volume book pays particular attention to the Eastern Front: chronologically speaking, Sonar starts out with the beginning of Operation Barbarossa on the early hours of 22 June 1941, and it ends with the German unconditional surrender on 8 May 1945. Hiroshima and Nagasaki are two conspicuous gaps in Kempowski’s meticulous coverage of the Second World War. This exclusion is all the more striking given the nature, meaning, and consequences of the atomic attack on those two Japanese cities; in a way, such an absence seems to emphasize the difficulty to represent language-defying events. Nonetheless, Kempowski’s Sonar ought to be seen not only as a fascinatingly well-rounded and comprehensive account of the war, but also as a model for future collages of texts on the Second World War that do comprise all the fronts—including texts on the war’s single most gruesome act of terrorism: the atomic bombing of Japan on the 6th and 9th of August, 1945.

Nil Santiáñez is a professor of Spanish and International Studies at Saint Louis University. His books include Topographies of Fascism (U. of Toronto, 2013), Goya/Clausewitz (Alpha Decay, 2009), and Investigaciones literarias (Crítica, 2002). His latest book, Wittgenstein’s Ethics and Modern Warfare, is forthcoming from Wilfrid Laurier University Press in fall 2018.