Our America: Socialism or Barbarism

“If people don’t want to listen to you, what makes you think they want to hear from your sweater?” Fran Lebowitz

I want to tell the story of a T-shirt. Not material history—not the story of its cotton, possibly Egyptian, of the history of child labor in the Nile basin, or of recent efforts toward sustainable agriculture, and not of the T-shirt’s manufacture, in, say, Bangladesh, Cambodia, or India, and of the abusive conditions for workers in those countries. Not that—even if one of the best ideas I ever heard for an undergrad syllabus did tell such stories: over the course of a semester, students learned the global history of a few everyday items already a part of their world, even before a morning class (toothpaste, T-shirts, sneakers, coffee, milk and cereal, etc). Instead, this story will be about reading. (Pace Lebowitz, isn’t that what T-shirts are for? Clearly author Tabish Khair thinks so.) 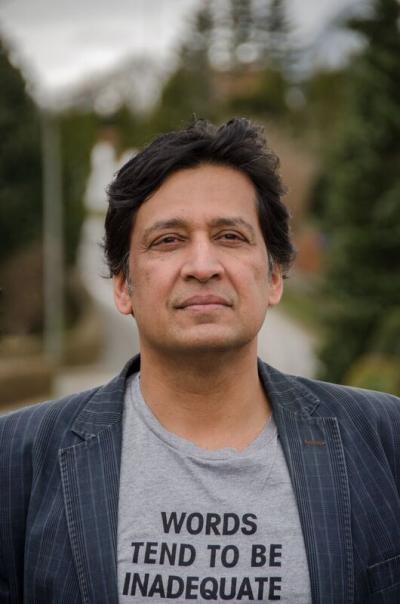 Like most people, I reckon, when an item of clothing becomes a personal favorite, it happens more out of association than for any particular look or style. Or maybe that’s just me, a rather style-less guy, talking. In any case, the T-shirt I want to tell you about was a gift—received a couple of years ago, during a wonderful few weeks my wife and I spent at the American Academy in Rome (or, as we generally call it, Paradise). One day, we arranged a meeting with a brilliant young Roman filmmaker, Agostino Ferrente—someone I’d corresponded with, but never met. Given where we were staying, Ferrente asked if we’d heard about the summer movie series in Trastevere’s Piazza San Cosimato, just below the Gianicolo hill, where the American Academy and American University occupy very prime real estate. (If you’re a fan of Paolo Sorrentino, and his film The Great Beauty, you’ll remember its opening scene at the Fontana dell’Acqua Paola—just a hundred yards below the Academy.) 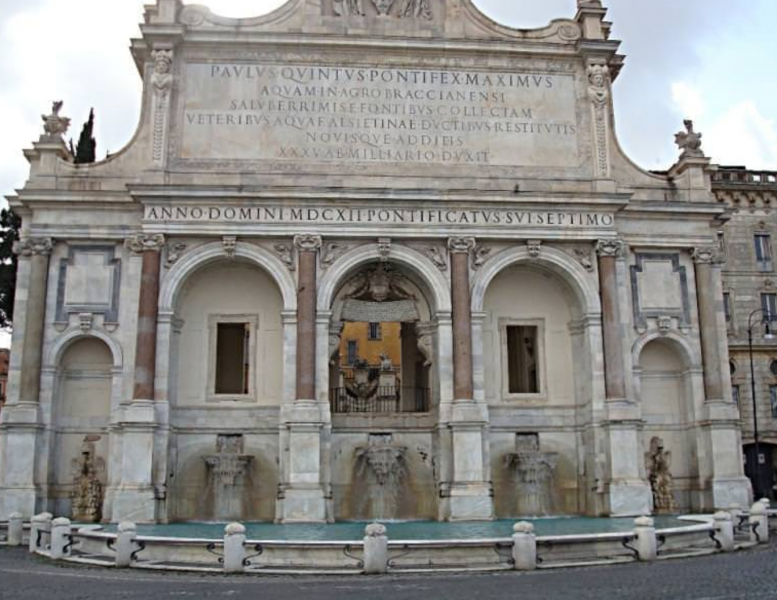 We had indeed heard of the film series, curated by the marvelous ragazzi del Cinema America, a group of young cinephiles that mobilized in 2012 to save a celebrated Trastevere art house theater, the Cinema America, from destruction. Though they haven’t yet managed to reopen that venue, what they have done is present free film screenings each summer, filling the Piazza San Cosimato with a Roman public, with tourists, and with whoever just happens by, nearly every night of the week. All sorts of films: Walt Disney and Star Wars as well as art house fare, something for everyone. Two summers ago, we’d made it a point to go on the second night: to see Bertolucci’s Last Tango in Paris, a film that had long been censored in its home country, with its director convicted of “obscenity.” Certainly, in the age of Weinstein and Ailes, the film provokes other essential debates, but its obscenity—or keeping the film off-stage—is no longer a question. To see the movie in an open air setting—with neighborhood families having picnics, local dogs squabbling during the first sex scene—was truly beautiful, and made even memorable by the appearance of the director, a long-time Trastevere resident, to introduce the film. No doubt one of Bertolucci’s last public appearances, given that he passed away the following year in November.

In short, we were happy when Agostino suggested that we meet him at San Cosimato. When we got there, we found him talking to the staff running the film that night. He introduced us to the crew, who—after Agostino misled them into thinking that we were academics of any note whatsoever—insisted on giving us both one of their T-shirts. Roman colors, of course: maroon and gold, with the neighborhood logo, Rione di Trastevere, on the front, and Cinema America Trastevere on the back. In my case, this was actually adding to a collection: a year or so earlier, we’d met another film group in the same square, the Archivio Audiovisivo del Movimento Operaio e Democratico, who were presenting documentaries about Rome in various squares in Rome, touring about in a red Piaggio Ape, the legendary three-wheeled utility vehicle with a Vespa engine, beloved by farmers all across Italy. I got one of their T-shirts too. 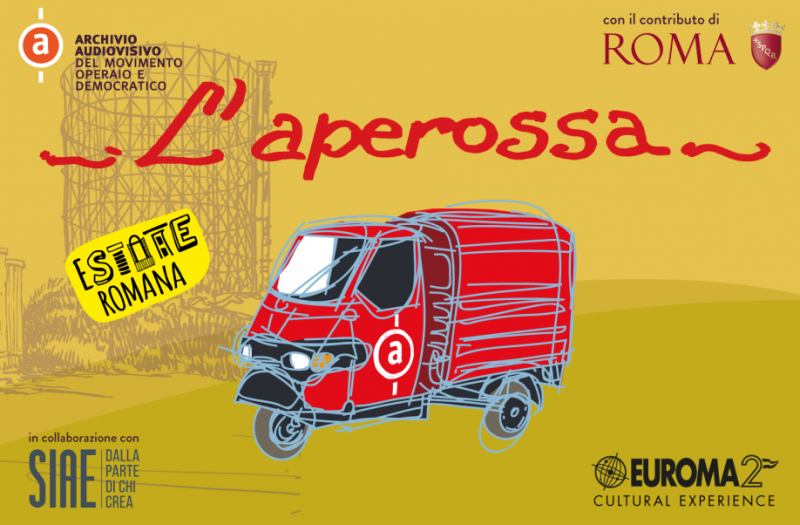 Given the story of its provenance, you won’t be surprised to hear that the other day, when my wife—who teaches Italian and Comparative Literature at Smith College—and I were having a beer with a new Italian colleague of hers at a nearby café, I was wearing my Cinema America T-shirt. At some point, we started talking about Agostino’s brilliant new film, Selfie, so we also had to tell the story of the T-shirt. When I turned around and showed the Cinema America logo to our new colleague, he said, “Bravo! It’s important to wear that shirt.” So that’s when I found out.  Ten days after the event in question, and just eleven since I’d just been in Rome myself, walking through Trastevere, proudly wearing my T-shirt. On this last trip, I even bought myself another one; as you can imagine, two years of hard use have made the original a bit worse for wear.

Here’s what happened. On the evening June 15, four twenty-year-olds spent the evening watching a screening of Paul Schrader’s First Reformed in Piazza San Cosimato. Afterwards, only a few blocks away, they were attacked by a group of right-wing thugs. One of the filmgoers, David Habib, reported, “In just a few minutes, the first two became four, and then maybe ten. We couldn’t manage to get away or defend ourselves.” They were beaten with fists, headbutts, and bottles. Habib suffered a broken nose; one of his friends had to get three stitches over an eyebrow. With all the young kids roaming the streets of Trastevere on a Saturday evening, why attack these four? They were told: “You’re got a T-shirt of Cinema America, so you’re an antifascist.”

In other words, they were beaten for daring to wear the colors of an art house cinema. The following night, Jeremy Irons, in Rome to introduce the Piazza San Cosimato screening of Bertolucci’s Stealing Beauty, made a point of donning a Cinema America T-shirt. A few days later, the police made four arrests, with identifications based on surveillance camera footage of the attack. At least a couple were members of the Italian neofascist group CasaPound. The night after the arrests, there was another attack, and this time the target was a former girlfriend of the director of Cinema America.

At this point, any reasonable person would likely ask, what the hell? what do these criminals have against a bunch of kids who just want to show movies and make people happy? out of all possible targets, why this? The question is important; to my mind, it recalls another query about right-wing insanity, posed by Naomi Klein. Why is the right so invested in denying the climate crisis, Klein asks, so much so that they’re willing to stake out a claim as twenty-first century flat earthers, denying a truth that any rational person has to acknowledge? As you’ll recall, Klein answers her own question, arguing that their position is in some sense logical, given that any acceptance of climate change must also entail accepting governmental intervention into, regulation—and perhaps even ownership—of the energy sector. In short, what they call socialism. Frankly, if this planet is to have a future, that’s what they should call it, because nothing else can save us.

When a group like l’Aperossa decides to show docs all across Rome, or when an activist group in the same city decides to save a historic movie theater like Cinema America or Apollo 11, or when a bunch of kids manage, year after year, all the bureaucratic, logistic, and creative footwork it takes to bring free movies to their city, it is a gift for the community, but it’s also more than that. In a word, it’s antifascist.

Recently, at a discussion after a local screening of an antiwar film made by Matt Lagoze, a US Army cameraman in Afghanistan, one question seemed most essential. Both audience and filmmaker pondered how to keep kids, and especially boys, from falling for the lure that soldiering poses for teenagers. The adventure, the male bonding, the force that gives us meaning, call it universal neo-fascist bro culture: this is a thing, and the threat it poses has to be faced. When Cinema America takes back the commons, when they build a space for community, when they celebrate the beauty that art sometimes steals from power, they are in fact giving us an answer, central to the only one there is. We humans can also come together, in affirmation of what we share—not in opposition to some invented other we need to fear, hate, attack, and eliminate in order for us to exist. If Cinema America’s community building, inclusivity, caring, and creativity is socialism, well, the alternative is barbarism.

There’s only one way to sum this up: I’ve got a Cinema America T-shirt. And I’m antifascist. 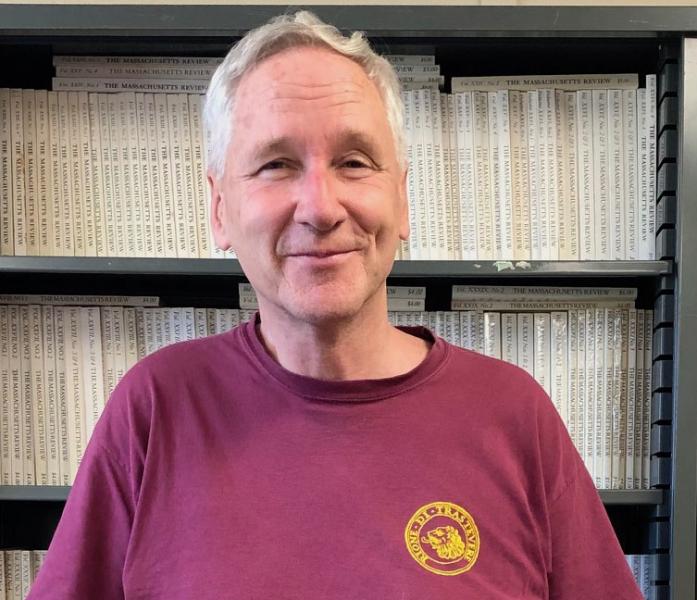 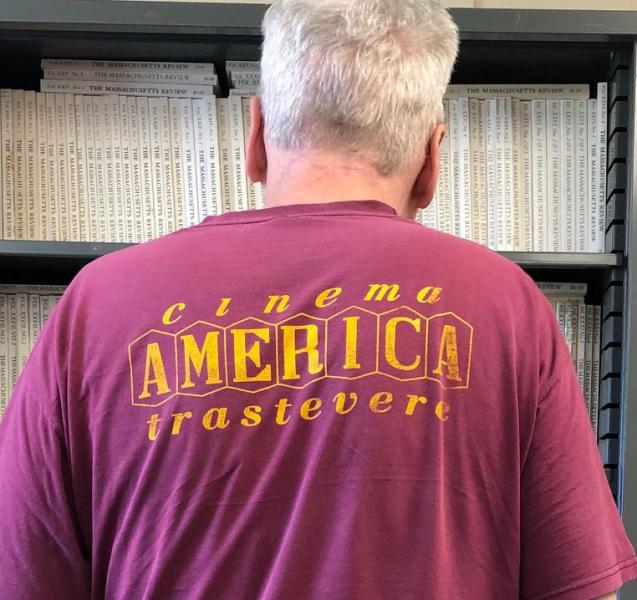