The World, Not the Mirror What You Have Heard Is True: A Memoir of Witness and Resistance and In the Lateness of the World by Carolyn Forché (Penguin 2019 and 2020)

I entered the small, mud-walled room, where she offered me a stool and a metal cup of water, smiling, her hair tied back, her eyes bathed in a light that had no source other than within her.
—Carolyn Forché, from What You Have Heard Is True

“Look at the world, not at the mirror.” This is Leonel Gómez Vides’ constant exhortation to poet Carolyn Forché, as he guides her journey of coming-to-consciousness in 1978 and 1979 El Salvador, which resulted in the poetry collection The Country Within Us, several anthologies on the poetry of witness, and four poetry collections of her own. Now she has published two books within a year and a half: her memoir What You Have Heard Is True: A Memoir of Witness and Resistance (2019) and the poetry collection In the Lateness of the World (2020). In both books she traces the gradual emergence of disasters and catastrophes—the war in El Salvador and planet-wide ecosystemic collapse—and in response, practices a poetic language of presentness, integrity and lucidity, most clearly expressed in the gentle metaphors of light and darkness that abound in both books: glimmering, shimmering, moonshine, starlight, lightkeeping, lighthouses, the light within.

In Lateness, Forché writes of “… the souls of others, who glimmer beside us / for an instant, here by chance and radiant with significance” (41). Her ability to truthfully and deeply encounter others within their situations, and to perceive and respond to their presence, develops during and as a result of the journeys recounted in What You Have Heard. Through these encounters she transforms from a sensitive, open-minded, slightly dreamy poet into a person who, as she puts it in an interview with Clare Mullen, was no longer concerning herself with things like “having to rest, and having to be comforted when things were bad.” As a poet she does not come into her own through contemplative introspection, as is often the case in lyric poetry; instead, she undergoes a process of conscientización and finds her own voice in the encounter with people and situations in El Salvador.

This process was initiated, stewarded, and accompanied by Leonel Gómez, who invited Forché and arranged the logistics of the journey and the situational logic of conscientización. Gómez is a multi-faceted, controversial, and charismatic figure, fiercely committed to the liberation of his people—and not aligned with any of the political factions in El Salvador. He talks to all of them and joins the cause of none of them. He considers El Salvador a “symphony of illusions” and invites a poet to become the witness to his country’s pain. 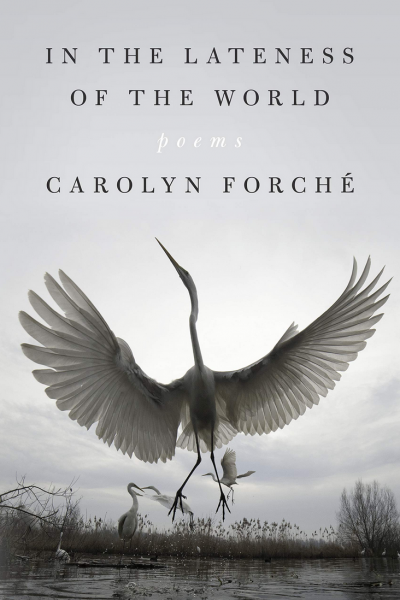 Why a poet? Poetry, with its texture, allows for resonance among many layers and dimensions of reality. Poetic language and poetic form can be the best possible—and maybe the only possible—means of giving some sort of communicable shape to the interaction of these layers and dimensions when they take the shape of atrocities. Atrocities are rarely one-dimensional, especially not when, as in El Salvador, they are intended as messages. Most atrocities are meant to kill in more than one way, and most are intended to infiltrate and damage the lives of the survivors in as many dimensions as possible. For a poet to create a poetic language of witnessing to this, the poet has to be willing and able to remain fully present in moments of horror and of pain and, once back in a place where she is safe from the fear, she needs to not walk away from her experience, even when she has the choice to do so. In other words, Gómez needed a poet who can give herself without losing herself.

What You Have Heard is about creating the conditions and circumstances for witnessing. These conditions are decided upon by Salvadoran people, and Forché is willing to allow herself to get into a situation that people from the Global North very rarely allow themselves to get into: she relinquishes control over her experience to someone from the Global South. Leonel creates a liminal situation when he takes Carolyn where she will have to distinguish between depending on him for everyday survival, depending on him for information that makes her more aware of the specifics of the situations she is in, and depending on him for emotional support. In the bourgeois, individualistic societies of the Global North, maintaining the boundaries between these three areas of connection is often interpreted as emotional coldness and personal rejection. In the dangerous situation of 1978 El Salvador, these boundaries must not be compromised. Leonel’s frequent brusqueness in telling Carolyn to see for herself, to look at everything except his things (What You Have Heard 173), seemingly withholding emotional support in jarring situations, are ways in which he maintains boundaries and creates the conditions for relational autonomy and for complicity. There is no place in this relationship for individualizing forms of attachment. As he once puts it: “From the beginning this has been your journey, your coming to consciousness. All along, I have only been responding to you. When you ask me a question, I try to place you in a situation in which you might find your answer. I do not have your answers, Papu. I am just a man” (What You Have Heard 332).

Leonel’s efforts are complemented by those of Margarita. She insistently tells Carolyn with regards to Leonel that “You have to be aware here, very aware, but more important, you have to be your own person. You have to think for yourself, do you understand?” (What You Have Heard 127). Margarita gives emotional sustenance, and she understands something that Leonel either does not understand, or cannot or chooses not to deal with; namely, that some of the situations he places Carolyn in are not—do not have the same meaning—for women as they are for men. Margarita creates the possibility for Carolyn’s autonomy as a U.S. American woman embedded within a Salvadoran context, as distinct from the independence of such a woman functioning within North American networks, and as distinct from the access to El Salvador afforded to a U.S. American woman traveling with a wealthy Salvadoran man. Only a profound friendship between women can achieve this type of autonomy under these circumstances.

The generosity and trust of Leonel, Margarita, and the many other people Carolyn meets is expressed in a great gift: sanctuary. Leonel finds a sanctuary for Carolyn every day, sometimes on the spot. Carolyn can undergo her transformation because so many people grant her a safe haven, often at their own great risk. Much later in the U.S., Carolyn and her husband Harry give shelter to a young man from El Salvador, brought to them by some U.S. filmmakers and activists. Alex, a former member of a death squad, flees his home country when he realizes that he had undergone a transformation he does not want: he has been turned into a person who kills other people, as well as his own self. Forché and her family agree to give him shelter while he offers his testimony. While Alex is taken to speak to politicians and interest groups, Forché makes inquiries about the protection that the U.S. might afford him, and she realizes that there is none. Shortly thereafter, Alex is arrested by the U.S. authorities, deported back to El Salvador, and handed over to the Salvadoran authorities. The episode harkens back to an incident early in the book, when many of Forché’s friends warn her that going back to El Salvador is dangerous, that Leonel is using her. And it resonates again with the words of a taxi driver exiled from Syria, in the poem “The Boatman” in Lateness:

… Leave, yes, we’ll obey the leaflets, but go where?
To the sea to be eaten, to the shores of Europe to be caged?
To camp misery and camp remain here. I ask you then, where?
You tell me you are a poet. If so, our destination is the same.
I find myself now the boatman, driving a taxi at the end of the world.
I will see that you arrive safely, my friend, I will get you there. (Lateness, p. 16)

In considering just these three episodes—Leonel and Margarita keeping Forché safe in El Salvador, the lack of protection for Alex in the U.S., and the horrific treatment of refugees in contemporary Europe—the concern from Forché´s friends appears in a new light. Who, in these moments, is truly trustworthy and caring? And who creates the conditions for the truth to be seen, spoken, heard, and listened and responded to?

In a conversation with Carolyn, Alex echoes comments by Leonel and Carolyn herself when he speaks about the purpose of testimony: “The Americans already know what’s going on, and have known for a long time. What’s going on is fine with the Americans, so what am I doing here?  … They know. So it doesn’t matter now if they put me in prison. I feel much more tranquil. The information is released. I feel tranquil. And I don’t care whether the tape recorder is on or off” (What You Have Heard 361). Witnessing, this and several other moments in the memoir suggest, is not about passing on information—the information is usually already known. Witnessing is about creating a watershed moment for the listener, the “from now on” that Gómez and his contacts in El Salvador create for Carolyn:

“...from now on, I would pay attention, and try to see as much as I could, not the world as imagined in my continuous waking dream, but as it was, not only the obvious but the hidden, not only the water cántaros but their weight, not only their weight but why it was necessary to carry water such distances. … I would learn to review my experiences for the missed details, and to keep in my mind that while I was observing others, they were observing me, and I would become less... readable, and when necessary I would attempt to ‘manage the perceptions of others’ so that, of the ‘five versions of the truth,’ in any given situation, mine might prevail” (What You Have Heard 140).

Someone who bears witness, who offers the possibility of this watershed moment, is not asking the listener for any favors. They are giving listeners an opportunity to no longer live in denial, in ignorance, or in indifference: to become someone who is truly present in the world and who stands by their perceptions and convictions, and to be truly oneself in the company of others. Lateness, thus, is no longer about looking at the world. Each poem is an invitation to be in the world and with the lives that we are in the process of destroying:

There is an owl living in the firs behind us, but he is white,
meant to be mistaken for snow burdening a bough.
They say he is the only owl remaining. I hear him at night
listening for the last of the mice and asking who of no other owl. (Lateness 51)

Forché, Carolyn, In the Lateness of the World, Hexham: Bloodaxe Books, 2020.

Forché, Carolyn, What You Have Heard Is True: A Memoir of Witness and Resistance, London and New York: Penguin, 2019.

Cornelia Gräbner is Senior Lecturer in Hispanic Studies and Comparative Literature at the University of Lancaster. Her research focuses on three main areas: performance and spoken word poetry, committed writing, and the cultural imaginaries of acquiescence.