I dreamed my mother called my name in a voice that ached with longing. I dreamed the acrid smoke of a fire stung my eyes, blurred the edges of the woman who held a deer antler with both hands as she pulled on a smoldering block of damp wood. The flames were the only light in a darkness so complete the trees had disappeared.
—from The Seed Keeper, Volume 61, Issue 4 (Winter 2020)

Tell us about one of the first pieces you wrote.
After a few years dabbling in freelance journalism, the first “real” piece I wrote was a story my mother had shared with me when I was a teenager, at an age when I was grappling with the usual teenage angst. She had told me that when she was 14, and living at the Holy Rosary Mission School on the Pine Ridge reservation, she went back to Rapid City for a surprise visit to her family and found their house empty; her family had moved. She was eventually reunited with them in Minneapolis. This story, besides introducing me to a completely unknown piece of family history, also set the course for my life, although I didn’t realize at the time. After carrying that story into my adult life, I finally wrote it down, and it later became the central story of my memoir, Spirit Car: Journey to a Dakota Past.

What writer(s) or works have influenced the way you write now?
Two books have had a profound impact on my writing work today. The first, A Wrinkle in Time, I read as a child. I distinctly remember how it introduced me to the idea that writing, and in particular, stories, could shift my understanding of the world and my role in it. The second book was Solar Storms by Linda Hogan. At the time I was immersed in researching the traumatic legacy of boarding schools and other assimilation policies that targeted Native children. Hogan’s book showed me that poetic, lyrical language could be used to tell horrific stories, inviting the reader in through their imagination. Her work gave me a much deeper understanding of the transformative power of art and literature.

What other professions have you worked in?
Most recently, as the director for a non-profit supporting Native food sovereignty: the Native American Food Sovereignty Alliance. Before that, administrative roles in the arts, and short stints as a freelance writer and editor. Worst job: MTC bus driver (I have no sense of direction and terrorized passengers by forgetting what route I was on).

What did you want to be when you were young?
A veterinarian. I’m an incomplete human being without a dog at my side. 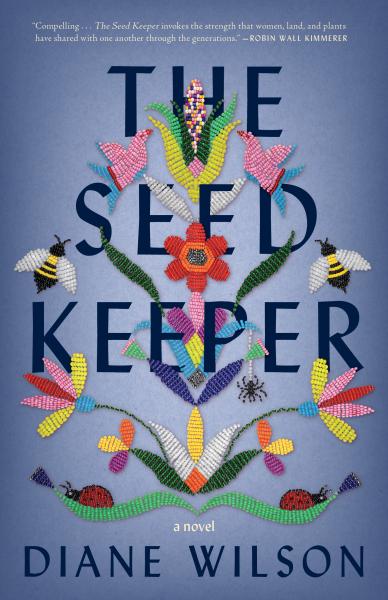 This piece is an excerpt from a novel, The Seed Keeper, that was inspired by a story I heard years ago while participating on a 150 walk to commemorate the forced removal of Dakota people from Minnesota in 1863. According to the story, the women had little time to prepare for their removal, had no idea where they were being sent, or how they would feed their families. So they sewed seeds saved from their gardens into the hems of their skirts and hid them in their pockets, ensuring there would be seeds to plant in the spring. Even in the midst of a crisis, they were thinking not only of their families, but also of future generations who would need these seeds. The novel tells this story through the voices of four Dakota women, across several generations.

Is there a city or place, real or imagined, that influences your writing?
The last vestiges of Tallgrass Prairie in central Minnesota are all that remains of the millions of acres that once covered much of the Midwest. This incredibly diverse ecosystem, formed over thousands of years, was ploughed under for farms in about 70 years. Roughly 1% has been preserved in a few scattered parks.

Do you have any rituals or traditions that you do in order to write?
I get up early (5 am is my goal), drink tea, journal, and get to work on whatever project I’m engaged with. For reasons I don’t fully understand, it seems important that I begin before dawn so that I’m writing when the sun rises. As if there’s a window, or a portal, into the writing that is somehow connected to light.

If you could work in another art form what would it be?
Anything that engages the hands: pottery, drawing, gardening (yes, it’s an art form to me).

What are you working on currently?
An essay collection that explores various aspects of how our relationship to the land, food, and plants has evolved over time. How we reconnect with our original, indigenous relationship with land and water.

DIANE WILSON is a Dakota writer who uses personal experience to illustrate broader social and historical context. Her new novel, The Seed Keeper, will be published by Milkweed Editions in spring 2021. Her memoir, Spirit Car: Journey to a Dakota Past, won a 2006 Minnesota Book Award and was selected for the 2012 One Minneapolis One Read program. Her nonfiction book Beloved Child: A Dakota Way of Life was awarded the 2012 Barbara Sudler Award from History Colorado. Her work has been featured in many publications, including the anthology A Good Time for the Truth. She has served as a mentor for the Loft Emerging Artist program as well as Intermedia’s Beyond the Pale. Awards include the Minnesota State Arts Board, a 2013 Bush Foundation Fellowship, a 2018 AARP/Pollen 50 Over 50 Leadership Award, and the Jerome Foundation. She is a descendent of the Mdewakanton Oyate and enrolled on the Rosebud Reservation. Wilson currently serves as the executive director for the Native American Food Sovereignty Alliance.