From the moment you open your copy of Martín Espada’s Floaters, you hear echoes of Whitman—and Espada’s own unmistakable, bold voice.

Responding to our past presidential administration, this collection tackles the hot-button themes. In addition to being a voice for the voiceless, with booming, resonant, sinewy lines, Floaters takes on other difficult topics as well. From immigration and racism to love and death, the reader is swept from the wreckage from the Trump years into the speaker’s love poems and elegies.

Along the way, Espada’s lines respond to the callous treatment of immigrants and people of color in a post-fact, pre-empathy era. The title poem, “Floaters,” is a heart-wrenching account of two immigrants who drowned crossing the Rio Grande, only to be dismissed as a liberal stunt. The poem begins with an epigraph from a post on the "I'm 10-15" Border Patrol Facebook group site that averred, “I HAVE NEVER SEEN FLOATERS LIKE THIS, could this be another edited photo.”

What follows are some unforgettable opening lines:

Like a beer bottle thrown into the river by a boy too drunk to cry,
like the shard of a Styrofoam cup drained of coffee brown as the river,
like the plank of a fishing boat broken in half by the river, the dead float.

Here the speaker describes the countless nameless bodies reduced to silence through this unfortunate fate. Espada’s signature repetition is equal parts an incantation of the lost souls and a lament for those whose lives we can never retrieve.

By the end of the poem, the prayer turns into a curse. The speaker sends a message to the skeptic who suggested that the bodies were a product of liberal conspiracy:

…May the men
…who have never seen floaters this clean,
…wait for the saint who flips through the keys on his ring
like a drowsy janitor, till he fingers the lock…
…and they plunge back to earth,
a shower of hailstones pelting the river, the Mexican side of the river.

In addition to invoking rage, the collection emanates hilarity, tenderness, and intensity. In the poem, “Love Song of the Kraken,” we see Espada blend love and fierceness as the Kraken says to the beloved:

Show me the sailor trembling
to light the fuse and fire the cannon. I will whip my tentacles
around their ships, hauling them to the murky bottoms of the sea.

Along with poems that center on the lives of marginalized people, Espada exalts their allies. In “Aubade With Concussion,” to his teacher lover the speaker says, “You leave me asleep/ every morning, commuting to the school in the city at sunrise.” The speaker is humbled when his lover leaves to do this worthy work, despite a serious accident. He says, “You awake with a hundred ice picks stabbing your eardrums.” Even in this conditon, his lover encourages a young Latinx student who has lost her boyfriend to gang violence to begin writing.

The narrator doesn’t want his lover to leave at dawn; he recognizes her heroism, and that of her students, ending the poem,

This is why I watch you sleep at 3 AM, when the sleeping pills fail
to quell the strike meeting in my brain. This is why I say to you,
when you kiss me in my sleep: Don’t go. Don’t go. You have to go.

Although Espada knows how to bring light and heat to the current, heart-wrenching climate, he also evokes a speaker who, even in nostalgia or sadness, makes the reader laugh out aloud. The poem, “Be There When They Swarm Me,” is dedicated to Espada’s friend, poet, and professor, Paul Mariani, who befriended the speaker when he was a young professor himself. Here we see Espada’s wry wit,

I wandered through the hallway lonely as a Puerto Rican in an English
Department, and you found me in the hallway,
calling me brother as my own brother never would. . .

Again we see the speaker’s fierce loyalty, not only to his fellow humans but also to his fellow poets, whose boyhood fierceness mirrors his own,

You were once the boy of the big shoulders, hauling cartons
of Campbell’s soup at the A&P in 1959, yearning to brain
the boss with a wrench. . . .

Other poems are elegies for the dead, the undead, and those who may or may not be. The speaker returns as a boy in “The Stoplight at the Corner Where Somebody Had to Die” and describes his beloved, late father’s foreboding words that,“‘They won’t put a stoplight on that corner till somebody dies…’”

After one of the narrator’s classmates is tragically hit by a car at that corner, the speaker describes seeing the boy again, “Later, I saw the boy in my gym class…/ Maybe he was a ghost, haunting the gym as I would sometimes haunt/ the gym…or maybe he wasn’t dead at all.”

Narratives like this transcend the personal and evoke a complex of social issues: the speaker and his peers live in a working-class area where their basic safety is unattended. The driver and the world treat the boy as a merely spectral presence, a ghost. His destiny fixed by his inner-city background, the child is socially dead before he dies.

There are also tender elegies, such as “Letter to My Father.” As the speaker gazes at the father’s ashes, he laments the suffering of his fellow Puerto Ricans in the wake of Hurricane Maria, “…fungus grows on their skin from sleeping on mattresses drenched with the spit of the hurricane.”

What unifies this collection of elegies, activism, and aubades may be summed up in one word: hope. The speaker, even in the face of his mourning for his relatives and father, ends with a vow:

. . . Hear my promise now. I will take you
to the mountains where houses lost like ships at sea rise blue and yellow
from the mud. I will open my hands. I will scatter your ashes in Utuado.

Poet, translator, and memoirist Maria Nazos is the author of two collections of poetry: Still Life (Dancing Girl Press, 2016) and A Hymn That Meanders (Wising Up Press, 2011). Along with other recognition, her work has received an Academy of American Poets Award.

On Crowdcast, Wednesday, February 24, at 7 pm EST, Martín Espada will be reading from his new book, Floaters. Espada will also be in conversation with Paul Mariani, poet, biographer of poets, former UMass professor and University Professor Emeritus at Boston College. The event is hosted by the Odyssey Bookshop in South Hadley, MA, an independent bookstore that needs and deserves our support. Signed copies of Floaters will be available. Register for this free event here. 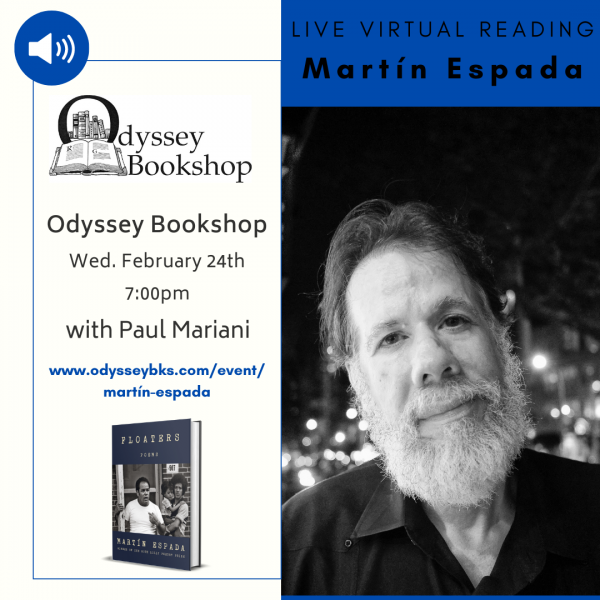