The Beers Before New Year's

- By By Marsha Bryant 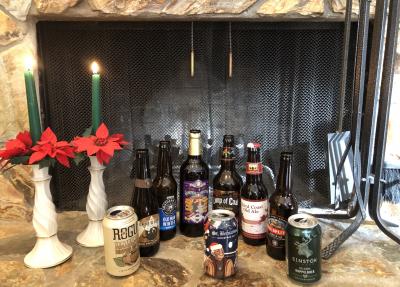 ‘Twas the midst of December: there came forth a cry
From us beer drinkers wond’ring which brews we shall buy
For festivities, feasting, for sitting by fires.
It’s the holidays! Taste all the good that transpires.
‘Tis the time to be stocking your holiday shelf
With the richly full-flavored beers. (Move over, elf!)

First Diwali and Hanukkah offered their light,
And soon Christmas and Kwanzaa make winter nights bright.
O what to my wandering tastebuds appears--
A bodacious selection of holiday beers!
Before dinner, or after, or for a night cap,
Here are beers that will warm you from all o’er the map.

From England, from Iceland in courses they came,
And I savored the labels and called out each name.
Then from Scotland, from Belgium, from U. S. of A.
Came more beer (and more cheer!) for these cold holidays.

The First Course
Say hello to the season with Samuel Smith’s ale
That is dubbed Winter Welcome. Its deep golden pale-
ness and mouthfeel so light are refreshing, what’s more
There is flavorful spice in the finish, so pour!

Old Man Winter’s a seasonal, from Southern Tier,
With a slight toffee smell. Effervescently clear
Is this tasty libation, and whisky in hue
With a hint of the boozy and hoppy for you.

But there’s more than the seasonal in my beer recs.
The Hazelnut Brown Nectar is one to try next.
It’s from Rogue, and alive with aroma quite fine
For its low ABV; sweet and malty entwine.

The Second Course
As your evening transpires toward the whisky, dessert,
Here’s an Icelandic Doppelbock that will assert
A boozy bright finish in toffee-haze hue.
Brewed by Einstök Olgerd, it deserves a halloo.

Also fit for a Viking, the hearty Scotch Ale
Brewed in Orkney—to Skull Splitter I will give hail!
A hopscotch on your tongue with its fine-bubbled feel,
It’s translucently amber; drink after a meal.

If a Lump of Coal next to your stocking appears,
O fear not! ‘Tis the Ridgeway dark holiday beer.
With its big-bubble foam and its chocolaty nose
And the toffee and coffee, the rich flavor grows.

The Third Course
When good St. Bernardus appears by your side,
Take a quaff of the Christmas Ale. Let it abide
On your tongue. It’s a sipper that’s strong, yet so bright
It will bloom on your palate: quadrupel delight.

Some say barley wine beer is the brandy of brews,
And this Third Coast from Bell’s is an Old Ale to choose.
With its hoppy infusion, and caramel, and fruit,
This one’s cellarable, fit for patient pursuit.

So now let me proclaim as I end my array:
Merry beer drinking, y’all, on these cold holidays!

MARSHA BRYANT writes about modernism, poetry, women's writing, popular culture, and pedagogy. Her recent essays have appeared in Feminist Modernist Studies, The Classics in Modernist Translation, and The Conversation. Bryant is Associate Editor of Contemporary Women's Writing, and Professor of English & Distinguished Teaching Scholar at the University of Florida.