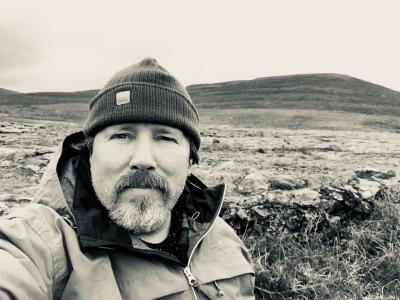 Here is a portion of the silence we walk upon, where the stony shore of the Atlantic curls breakers of salt onto a shelf of the lithospheric dead. At our feet, ammonites in their obsidian-colored whorls.
—from "The Jurassic Coast," Volume 62, Issue 4 (Winter 2021)

Tell us about one of the first pieces you wrote.
As a child, I wrote a poem about the fog in winter, known as Tule fog in the San Joaquin Valley. The poem is blurry in memory, but it was a persona poem from the point of view of the fog itself. I wouldn’t have known what a persona poem was at the time, but the alive-ness of the world was very present in the poem—as the fog had its own intentions, its own volition, with a mood that lingers with me still. As I look back on it, I can see that even as a boy I turned to language to try to make sense of the magical, the mysterious, the ineffable, the everything all around me.

What writer(s) or works have influenced the way you write now?
Artists often respond to this question by rattling off an intriguing list of the known, whether semi-obscure or monolithic in stature. If I’m honest about it, then I have to share the name of someone I wish you’d known, a brilliant soul who died far too young—my best friend since we were 7 years old, Brian Voight. Our decades of conversations on music composition, art, sculpture, film, story structure, aesthetics and politics and more—all of this is foundational to everything I write. Poet Ilyse Kusnetz is likewise at the foundation of all I do; her vision and approach to writing and revision watermark all that I write. In terms of genre or mediums, I think film has influenced my approaches to poetry far more than the incredible poets I’ve read over the years. I often think with a cinematic lens as I write, wandering through the landscape of a poem, listening to the soundscape, feeling the atmospheric presence of a moment in time.

What inspired you to write this piece?
One of the difficulties in writing about climate and climate change is that the problems are so vast that they can overwhelm the imagination. And so I’ve been working on a book of short essays, or meditations, that dwell on love and loss, on grief that is both personal and global. It’s called The Wild Delight of Wild Things. This is one of the meditations from that larger book of meditations.

Is there a city or place, real or imagined, that influences your writing?
I was raised in Madera County, a few miles from the San Joaquin River, and in the dusty grasslands at the foot of the Sierra Nevada Mountains. What I’m describing is the bottom of a dead sea. Yosemite rose over it all and I could see the snow-capped mountains from where we lived, even if we couldn’t afford the tank of gas to get there. There was an emptiness to it all, an austere beauty, a toughness to the land and the people who lived there—and as much as I wanted to move away, as soon as I could, that’s the landscape I love and remain tethered to even now. It was a place that invited attention to each discrete thing. The red-tailed hawk. The hunger of a coyote crying over the cattle rangelands at 3 am. Buzzards spiraling upward into the blazing sun of August. Sleeping outside in the summertime, watching the sky for the distant light of a satellite orbiting the planet. Unlike a large city, where sensory details wash over in an ocean of signals and objects and motions too innumerable to track, I lived in a valley that invited an unhurried meditation on the singular level.

Is there any specific music that aids you through the writing or editing process?
I love to listen to music, and I usually create playlists of songs to go with a project. These songs are rarely, if ever, mentioned as influences, but there is definitely an atmospheric and tonal influence layered into the writing—something I’m certain a reader can sense and feel, even if they can’t place the source. If there’s one specific song that seems to help with something I’m working on, then I’ll often put that on repeat until it becomes a kind of background and rhythmic pulse working more at the subliminal level than in the overt, conscious level of the creative process. 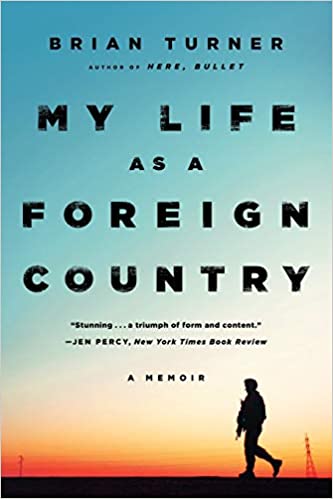 Who typically gets the first read of your work?
Ilyse was always my go-to, my partner in verse and art, as in all things, and she was a phenomenal in-house editor! She always used a purple pen to mark-up drafts and I never once was able to write something that didn’t make her pause to pick up the pen and offer edits (though believe me, I tried). I think of her as I revise drafts now, and her approach to the work is the first lens applied to new drafts. After that, writer Patrick Hicks is my first reader. There isn’t enough space here for me to even begin to share my gratitude for him.

If you could work in another art form what would it be?
I like to think that I already do! In fact, I think most writers do, too. I love to make music and to paint. I would love to write scripts and see them transported/translated into film. And because life is too short to sit around and wish about it—I’ve started some preliminary work on that, too.

What are you working on currently?
I’m revising three books of poetry (due out from Alice James Books in 2023). I’m also working on an album of music. We’re laying down the main vocals now and will soon go into the final mixing and mastering stages. I’m writing a very short novel and enjoying the process in that. I’m learning new things from each of these projects and there’s an addictive thrill to that.

What are you reading right now?
I’m reading a forthcoming book by the phenomenal Arianne Zwartjes, and I can’t wait to hear what you think of it! I also just picked up Twilight of the Eastern Gods by by the Albanian novelist Ismail Kadare. I thought I’d read everything by him that’s available in translation (as he’s my favorite novelist), but somehow I missed this one. When I say that he’s my favorite novelist—I mean to the point that I once traveled to Albania simply to fanboy my way deeper into the literature (via the country itself). If you haven’t read Kadare, then I recommend starting with either The Siege or The Palace of Dreams.

BRIAN TURNER is the author of a memoir, My Life as a Foreign Country, and two collections of poetry, Here, Bullet and Phantom Noise. He’s the editor of The Kiss and co-edited The Strangest of Theatres. He’s published work in the New York Times, The Guardian, National Geographic, Harper’s, and other fine journals. He lives in Orlando, FL, with his dog, Dene.