"Chocolat" Soldiering and the White Myth of Recovery 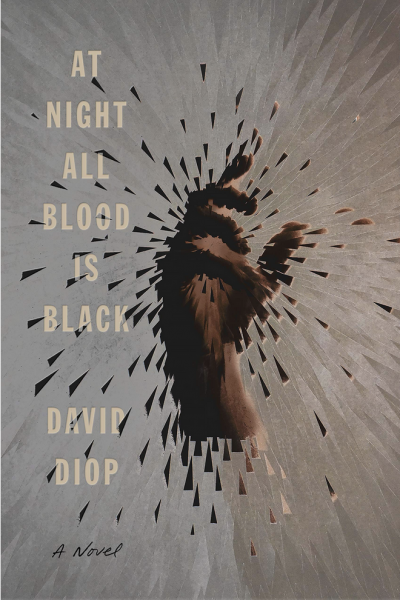 A Review of David Diop, At Night All Blood Is Black. Trans. Anna Moschovakis. Farrar, Straus and Giroux, 2020.

Lyricism is, strangely, no stranger to the trenches of the First World War. Whether to contain or to inflame the horrors, writers like Wilfred Owen and Siegfried Sassoon, David Jones and Erich Maria Remarque, Dalton Trumbo and Ford Madox Ford brought rhythm, repetition, and figurative language all to bear on the disquieting experience of the Western Front. Typically, the lyricism counters the horrors: poppies, butterflies, farm fields, or the camaraderie of brothers in arms bear ornament that sets them apart from and (unsuccessfully) shields them from the poisoned mud and rotting limbs, the shock of shells and sudden threat of snipers. It’s a rare work that lavishes its lyric care on cut-off body parts. David Diop’s At Night All Blood Is Black is such a work.

When his fellow soldier, childhood friend, and “more than brother” Madembe Diop is disemboweled by a German bayonet, Alfa Ndiaye, a Senegalese “Chocolat” soldier in the French army refuses to finish him off. “God’s truth,” Alfa tells us, “if I’d already become then what I am now, I would have slaughtered him like a sacrificial sheep, out of friendship. But I thought of my old father, of my mother, of the inner voice that commands us all, and I couldn’t cut the barbed wire of his suffering.” Instead, Alfa stays with Mademba through the long day of his slow, painful dying, three times refusing to put him out of his misery, unable to look away from Mademba’s “guts in the air, his insides outside.” When Mademba finally dies, Alfa stuffs his guts back in, ties his undershirt around the corpse to hold it all together, and carries the body back to the French trenches. From that point on, the “inner voice that commands us all” takes on a different note in Alfa’s head and drives him to take deliberate vengeance on the indistinguishable blue-eyed enemies. Not much caring whether he accidentally kills during an infantry charge, Alfa is methodical in executing his victims, gutting them so that they suffer as Mademba did. When they are dead, he cuts off the hand that held the rifle and carries the trophy home.

Come back with one severed hand and you’re a hero. Come back with a second, and you’re a fighting machine the nation can be proud of. Get the count up to seven, though, and you’re a monster, a sorcerer, a dëmm or demon. “After the seventh severed hand, they’d had enough.” Captain Armand, the unit’s commanding officer, recommends rest. Ibrahim Seck, “a poor old Croix de Guerre Chocolat,” fearfully conveys the captain’s message, clutching an apotropaic talisman and wishing that Alfa’s taboo madness might be exorcised. Both realize, as Alfa does, that “We can’t celebrate the fear of the enemy from the other side for long, when we are ourselves afraid. The severed hands are our fear, brought inside from the outside of the trench.” From the perspective of the troops, both Alfa and his collection of fetishes must be expelled. They are, in Julia Kristeva’s term, the abject: the irruption of the Real into the Symbolic order, the horrifying reminder of mortality, the breakdown in meaning caused by the collapse of the opposition between subject and object, that which must be removed, bounded, refused, contained, erased. So Alfa, with his contraband hands (all but the first, which rotted, now carefully cured and preserved), is packed off to “the Rear” for rest and recovery.

Lest you think my invocation of Kristeva’s psychoanalytic vocabulary is a critic’s imposition, I should be clear: Diop himself narrates the therapeutic process Alfa undergoes with Doctor François. Under the doctor’s welcoming smile, Alfa creates three drawings, each opening onto his prewar experience in Senegal. He draws his mother, his careful artistry and seemingly innate talent bringing her to life before the doctor’s “matching blue eyes”: “With nothing but my pencil, I brought my mother’s head to life. I knew, I understood very quickly what brings a head drawn in pencil to life, in the portrait of a woman such as this one of my mother. What brings a drawing on a piece of paper to life is the play of shadow and light.” Drawing his mother, Alfa remembers her, recalls the story of her marriage to his father, relives her departure and disappearance. One need not be Freud or Lacan to recognize here the primal, painful moment of individuation. Next, he draws Mademba, making a “less beautiful” drawing because “Mademba was ugly.” Alfa admits, though, that “if Mademba wasn’t as beautiful as I am on the outside, inside he was more so.” Remembering how he grew up with Mademba, how he helped his “more than brother” develop his skinny body so that the army recruiters would accept him, leads Alfa also to recall his own initiation into sexual pleasure with Fary Thiam, the beautiful daughter of the village chief (an initiation that he describes in terms of “the warm, sweet, and wet insides of her body”). Finally, he draws the collection of severed hands, an act of transformation and preservation that enables him to bury the hands themselves. But where we might expect this interment to enable a healthy integration of Alfa’s battlefield experience into his psyche, the moment instead produces further alienation and disintegration: “After seeing them, Doctor François no longer smiled at me like before.” By the end of his sojourn at the Rear, Alfa has disappeared entirely, replaced as if in an act of demonic possession by the spirit and identity of another.

Inside, outside. Light, shadow. These oppositions enable meaning, enable art. Western culture offers two compensatory and consoling mechanisms in the face of horror, whether the dramatic civilizational collapse epitomized by trench warfare or the everyday experience of our fall from unity into separateness and the painfully experienced law of the father. First, we might, in the carefully controlled confrontation with what we repress, in the narration that untangles the displacements and condensations by which the unconscious reminds us that our pain is there, come to accept what we reflexively abjectify, to integrate our fears and illicit desires and become whole. Second, and relatedly, we can transform pain and chaos into pleasure and order through the exercise of formal discipline, the creation of art.

Diop challenges both of these nice stories. Narratively, psychoanalysis and psychotherapy and the creation of artworks fail here as Alfa’s “madness” leads to continued violence and his confessional voice is supplanted. But Diop’s subversion of our comfortable myths of recovery and transformation is woven through at every level of this novel’s tapestry. The violation of bodily integrity that confuses inside and outside is echoed in the figuration of sex (the imposition of the outside on the inside) and community (the need to protect the inside from the outside). This binary and its troubling recur throughout the book (as passages I have quoted here suggest). Carefully wrought artworks that transform raw experience into objects of beauty become horrifying fetishes, and the rhythmic repetition constitutive of lyricism becomes a fabric of tics: “God’s truth,” “the enemies with matching blue eyes,” “Croix de Guerre Chocolat,” “warm, sweet, wet insides.” The novel’s sentences, like the severed hands, are carefully dried, baked, wrapped up. They are lovingly attended to (and all of this bizarre loveliness comes through in Anna Moschovakis’s translation). And the madness, rather than dispersing or being contained, just grows.

If art and therapy (and art therapy) all fail to cure Alfa, is it because they’re flawed or because the trauma of trench warfare is too much for them? Both, maybe. Or neither. Diop makes clear that a fundamental factor in the French understanding of Alfa as a dëmm is the fact of his Blackness. Even when lauded by his fellow soldiers, Alfa is set apart from them, his heroism marked by his alienness. Diop emphasizes the whiteness of the severed hands to highlight what seems, to the French combatants, an unnatural and exacerbating aspect of Alfa’s murderousness. Sure, other “Chocolat” soldiers recoil as well, but they have been absorbed into the institutional modalities of “white” Frenchness: the Croix du Guerre, with both military and religious significance. Doctor François’s “matching blue eyes” and condescending smile place Alfa at a lower spot in the social order, and his daughter’s desiring gaze plays into assumptions of the primitive’s sexual potency and availability (hailing Alfa into a subject position his memory-ridden confusion easily enters). To put the point precisely: Diop subverts the consolatory stories of psychoanalysis and art for Senegalese Black subjects like Alfa.

And yet, in a turn that does not quite (to my mind) work, Diop offers an alternative—grounded not in these Western practices or assumptions but, instead, in a local legend with which Alfa and Mademba are familiar, a story about a lion sorcerer. Through the recollection of this story, Diop enacts an integration utterly different from the kind offered by analysis, a resurrection and reunion that revalues the outside/inside, matter-out-of-place dynamic. But the novel is more persuasive, and much more powerful, in its performance of trauma unrecovered from and unrecoverable, the repetition compulsion that evinces trauma suffered, both in the trenches and in arising from racist assumption, in all of that last word’s range of valences.