The Writer as Meditative Thinker 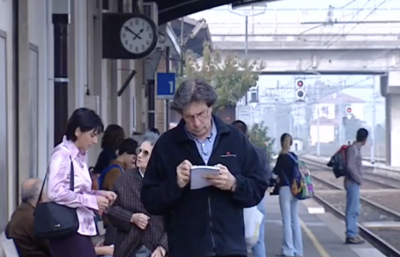 This year, during the second night of January, one of our favorite writers passed away. Gianni Celati was a brilliant thinker, an innovative, experimental stylist, and an influential translator—and most of all, he cared about people, about communities, and about history. In short, our kind of guy. We were honored, a few years back, to publish Celati’s remembrance of attending the funeral of his friend and mentor, Italo Calvino, as translated by Patrick Barron.

To commemorate Celati's work, and to introduce it to those of you not fortunate enough to know him already, we offer here a three-part colloquy. First, a cinematic portrait and interview of the man himself, excerpted from the Davide Ferrario film, Mondonuovo, produced by Movie Movie in Bologna (2003). Second, a commentary and itinerary by Anna Botta, a stroll through one of Celati’s own films, made in collaboration with John Berger, Visions of Crumbling Houses (produced by Stefilm, Torino and Pierrot e la Rosa, Bologna, 2002). Finally, some words written in memoriam from his English translator, Patrick Barron.