A Review of An Afro-Indigenous History of the United States

- By Students of Hampshire College 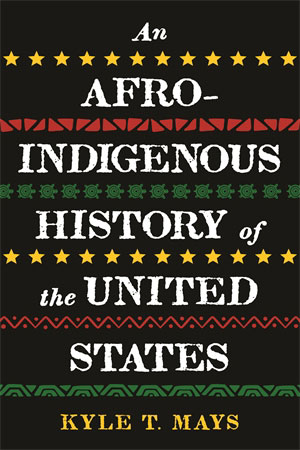 A Review of Kyle T. Mays, An Afro-Indigenous History of the United States. Beacon Press, 2021

Kyle T. Mays’ An Afro-Indigenous History of the United States offers a distinct alternative to white-washed histories of the United States. His primary goal is to create a new discourse surrounding African and Indigenous relationships, particularly through recovering underrepresented histories, developing new understandings of better known historical figures and events, and finding potential avenues for future solidarity. The author seeks to “recover some lost histories to show that Black and Indigenous peoples’ histories are tied not only to enslavement and dispossession but also a struggle for justice” (ix-x). Mays’ book acts as a needle and thread with the goal of weaving Black and Indigenous histories together. This allows readers to reflect on how we often separate these histories. Too often we see them individually in their relation to whiteness instead of thinking of Black and Indigenous histories, experiences, and struggles as deeply intertwined. To make this point, Mays describes significant events from European invasion to the twenty-first century, drawing on both historical common ground and modern examples of solidarity.

Mays is an Afro-Indigenous (Sagniaw Chippewa) professor at the University of California, Los Angeles. He grew up in Detroit and Lansing, Michigan and studies African American and American Indian histories, taking pride in both of his identities. He previously authored Hip Hop Beats, Indigenous Rhymes: Modernity and Hip Hop in Indigenous North America. Much of his scholarship focuses on a commitment to eliminating the perceived barriers between Black and Native histories, as he seeks to do in An Afro-Indigenous History of the United States and his forthcoming book, City of Dispossessions: Indigenous Peoples, African Americans, and the Creation of Modern Detroit.

The book gives readers an academic, but approachable introduction to Afro-Indigeneity and U.S. history from Mays’ viewpoint. His compelling perspectives create a space for continued questioning and conversation, encouraging the reader to dig deeper through continued research. Mays’ intent is to underline the commonalities between African and Indigenous peoples in the hopes of provoking change within and outside of Afro-Indigenous communities. He also calls attention to the lack of recognition of the interrelationship between the two groups which, in turn, preempts coalition-building between them. Additionally, the book brings to light several African and Indigenous people’s stories, establishing parallels between the experiences of each group. Other themes Mays builds on are the experiences of dispossession, erasure, and fetishization of Afro-Indigenous groups and individuals which creates an avenue for Mays to emphasize the need for liberation through coalition building.

In the introduction and chapter one, Mays gives three reasons for writing this book: his personal identity as an Afro-Indigenous person, as a way to imagine a new world bringing an end to the oppression of Black and Indigenous peoples, and to visualize invisibilized histories through a “deeply intellectual component rooted in (his) interactions in graduate school” (ix). Mays makes a persuasive argument that Africans are Indigenous. Contrary to the widely held belief that Africans were forced to erase or let go of their lands and customs once they were forcibly taken away from their homelands, Mays asserts Africans maintained their Indigenous knowledge and went on to forge early conceptions of Pan-Africanism, therefore maintaining their indigeneity throughout time. In order to back up his claim, Mays includes many narratives of “Indigenous African” intellectuals Olaudah Equiano, Phillis Wheatley, Lucy Terry Prince, and Paul Cuffee. Chapters one and three discuss how the core foundations of whiteness and U.S. democracy, especially during the formative years of the United States, are based on the oppression and erasure of Black and U.S. Indigenous peoples. Mays presents numerous forms of Black and Indigenous peoples’ resistance to oppose their oppression.

The most compelling chapters were six, eight, and the conclusion. Chapter six looks at the relationship between Black Power and Red Power during the 1960s and 70s, exploring key moments of resistance such as Wounded Knee and the Poor People’s Campaign. This chapter makes the case that Black Americans and Indigenous peoples often forge ideological alliances in the pursuit of freedom and have “...sought to radically transform their predicaments in a white supremacist settler society.”3 The chapter highlights key leaders in both movements showing the overlap and interchange of ideological, activist techniques, use of media, law, imagination and solidarity that connect the movements during this time. It illustrates the importance of a sense of unity in values and goals as a part of struggles needed for collective action.

Chapter eight, “The Matter of Black and Indigenous Lives, Policing and Justice” discusses the U.S. surveillance of marginalized communities and systematic brutality resulting in murder, police killings, and continual Indigenous disappearances. These oppressions are built into the core of the U.S. “justice” systems. This is happening right now! In this current system, American Democracy prioritizes justice and equality for a very privileged few. Mays askes the question; Can we “achieve freedom within US democracy,” when “the conceptual practices [were] set out by white slave owners and land stealers,” (Mays 159–160)? Thinking about this question, the chapter considers what it would look like to redirect funds towards essential community services and away from policing. The Black Lives Matter and Native Lives Matter movements have created greater visibility and space through action to imagine worlds outside of policing.

The Conclusion, “The Possibilities for Afro-Indigenous Futures,” highlights Black and Indigenous voices showing a multiplicity of ways to exist, relate, think, create, and write about the topic of futurisms. Mays discusses several modalities of thinking about futures including poetry, global discussions, reparations, and the framework of kinship as solidarity. Mays brings together former principal chief of the Cherokee Nation Willma Mankiller, South African President Thabo Mbeki, and Black radical activist Angela Davis and many others to engage these topics (172).

Mays narrates the convergence of Black and Indigenous histories, contributions, and narratives paired with current activism and struggles to form a more comprehensive, decolonial history, but could have used more diverse collaboration and fuller analysis. One key topic he could have expounded on is the way of life and identity of Native Africans, with examples of how their experiences of Indigeneity are similar to Native Americans, and how the similarities might be useful in fostering solidarity. He also misses key insight into many other things, for example history and current movements for the Freedmen. He initially forgoes substantive details on the Freedmen, then adds them back in in the postscript. This topic could have strengthened his arguments earlier in the book, and, if he didn’t feel qualified, he could have relied on more knowledgeable scholars and/or activists on the Freedmen.

His discussion of white-passing privilege lacks analysis of the multi-layered aspects of racial violence. Starkly contrasting the experiences of Afro-Indigenous (those exposed to everyday racism and at the highest risk of physical harm) with white-passing Natives, the reader can come away from the book never considering the violence of generational trauma that all Indigenous people share. Conversely, Mays’ research and collaboration lacks voices from the most marginalized African/Afro-Indigenous femme and gender non-conforming voices, so when he attempts to call for self-determination for them, he does so without their voice.

Throughout the book, Mays eschews most of the trappings of academic writing and chooses to use an informal style, both in language and structure, making the oftentimes inaccessible topic of Black Indigeneity easy to comprehend for new readers. While Mays goes into important detail about certain historical events and his own opinions, much research is left to the reader. This lack of elaboration on people and concepts presented throughout the book leaves the reader wanting more. For example, in chapter 6, he briefly mentions the hope for unity among third-world peoples: “it is interesting that Black radical intellectuals and activists held this belief” (109). Mays could very easily shed light on which intellectuals inspired him.

While the writing style is highly accessible, the informality sometimes makes the structure unclear and presents a challenge for readers to self-orientate. For example, in chapter eight, Mays jumps between topics ranging from police funding reallocation, the removal of police guns, policing as a fundamental part of US democracy, and martial arts, all within the span of one page (162). While each of these topics may be of importance to the chapter’s focus on Black and Indigenous lives and policing, the style in which he presents these topics is truncated and connections are not explained, making for difficult comprehension.

Mays introduces the book by sharing his personal connection to the topic as an Afro-Indigenous person, saying he’s been “writing this book for his whole life” (xiii). This is unsurprising, as the liminal space in which Afro-Indigenous people exist can create unique life experiences that are hard to grapple with and contextualize. This is a deeply personal topic, as the experience of Afro-Indigeneity can be lonely and isolating. The book is rooted in his personal experiences, but would have been strengthened by highlighting one or more multi-generational Afro-Indigenous communities, each with their own histories, experiences, and culture, such as tribes of the east coast, the mixed-raced history of the five tribes, and the mixture of African and Indigenous practices inherent to Louisiana Creole culture.

Mays attempts to fit in a lot of societal observations from his perspective while linking them to the history he discusses; he bounces from vignette to vignette but often neglects the work of connecting them together. For example, in chapter seven Mays broaches the subject of social media and writes about popular culture, but he doesn’t give much analysis or connection to history. Mays illustrates important topics such as cultural appropriation, offensive mascots, racial slurs, and online conflicts, but many readers would have benefitted from Mays tracing their origins and more fully contextualizing the historical and contemporary implications of this dehumanization. Readers get a sense of Mays’ strong personal opinions on these matters through his own words, rather than highlighting other Afro-Indigenous voices and perspectives, which deprives the audience of a broader scope.

The book surveys 400 years of history in 300 or so pages. In this ambitious historical scope, the most obvious shortcoming is the meagerness of women’s voices. Mays acknowledges that women play(ed) an integral role in Indigenous and Black communities and movements and advocates for dismantling the heteropatriarchy. However, the lack of women’s stories contributes to the invisibility of women of color, who do not receive enough credit despite playing huge roles in Black and Indigenous liberation.

An Afro-Indigenous History of the United States offers an entry point for understanding Afro-Indigenous history from an anti-colonial perspective, but it does not pretend to be comprehensive. The book’s real strength lies in its ability to offer an intersectional Black and Native view of the United States. Mays employs previous and lesser-known figures and events to weave Afro-Indigenous narratives together, an effort to remediate the lies and distortions of white-washed American history. In doing so, he opens up new avenues for further research in areas as diverse as anthropology, social movements, musicology and current politics.

The content and Mays’ style of writing make this book ideal for a general audience, especially for high school and undergraduate students not familiar with Black or Indigenous histories. The writing style challenges dominant (read: white) academic conventions; it is conversational and easily digestible for any audience. We believe that the book is not an ideal textbook for a course on Afro-Indigenous history, but its focus on decolonization and retelling history using intersectional methods makes it a welcome addition.