Learning History Through the Lens of Sport 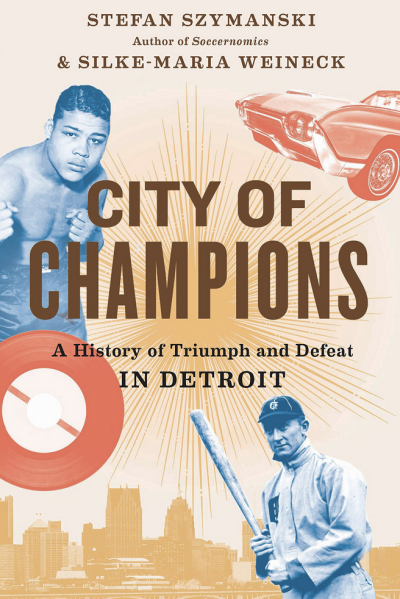 Sporting events—like tragic accidents or illnesses, early friendships, or financial crises—are ubiquitous human experiences. Many, maybe most of us suffered through team sports as kids, a few excelling, others turning towards books or the arts or still other fields of competition. Many, maybe most of us also became sports fans, our fascination with the spectacle and affiliations with our teams providing lifelong fun and a comfortable foundation for bar talk and bragging rights.

Professional team allegiances are familial, transgenerational, and tend to stick with us wherever we go, like an accent. When I moved from Detroit to the Northeast, I noted how whole sections of the country seem cut up into regional sports affiliations (Maine is clearly aligned with Boston, while Vermont is divided between New England and New York fandoms). For many individuals, sports provide the motivation or the staging for personal dramas. On a societal level, sports help define our collective identity. They provide common history and are crucial to our communal self-understanding.

City Of Champions by Stefan Szymanski and Silke-Maria Weineck takes up this common touchstone in order to tell a wider story. It uses the lens of sports, along with sports-related economic events and social history, to bring into clearer focus a perennially neglected and largely misunderstood American metropolis: Detroit. Seminal sporting events in football, baseball, boxing, basketball, etc. serve in tracing the city’s complicated, shifting role in the American consciousness. Detroit, while not uniquely suited to this form of spotlight, is particularly well characterized from such a perspective.

Detroit has always been a quintessential American city. Its important roles in the automobile industry, the labor movement, music, and race relations, in particular, have given it an outsized role in our national identity. Its triumphs include some of the greatest moments our country has known; its problems are emblematic of our most ingrained dysfunctionality.

Not only does City of Champions deliver a cogent analysis of the importance of sports to the social and psychic milieu of Detroit, as well as providing insight into the long-term economic consequences to a large city of decisions made around sports teams, it also provides insights into what defines the strengths and weaknesses of the city, and perhaps the country as well: viz., its racial and cultural history. These sports stories reveal much about who we are today and how we continue to engage with each other, or not.

Foremost of the sports figures caught in the book’s spotlight are Joe Louis and Ty Cobb. Each reached the pinnacle of their respective games, becoming nationwide household names and Detroit heroes. Even today most people know them, though they competed long ago, during the first (Cobb) and second (Louis) quarters of the last century. Their stories bookend the economic and racial inequities of the early twentieth century. Cobb, a fearsome competitor and take-no-prisoners baserunner is lauded as one of the greatest baseball players of all time. He has also long had a (some say mistaken) reputation for racism. As a celebrated ballplayer, he received and profited from many endorsements, perhaps most significantly from the Coca-Cola Company, becoming the first millionaire baseball player.

Joe Louis, a masterful boxer beat—in 1938, just as Germany annexed Austria—Max Schmelling in front of the whole world, thereby trampling the Third Reich ideology of Aryan superiority. Following his spectacular victory, Louis was a symbol of the best of Black America; despite the racial problems rife throughout his own country, he strongly supported the war effort, enlisting as an Army private. Yet he was unable to capitalize on his fame during his later years and was even denied ownership of a Ford automobile dealership because of his race. He died in poverty. Schmelling, though a German citizen, was enriched by, among other sponsors, his representation of the Coca-Cola Company throughout the same period. Such stories from City of Champions, and many others like them, are simultaneously riveting and dispiriting.

While many of the names and historical events that the book recounts are well-known, Szymanski and Weineck also cover Olympic bids, lacrosse, automobile racing and more, excavating Detroit’s record in reverse chronological order, from the present day back to pre- revolutionary times. This powerful retrospective covers a broad range of topics, from the economic impact of stadium financing and governmental interventions that favor sports conglomerates to the human costs of social unrest. They examine big money sports as well as grass-roots, low budget teams.

This amply referenced study is academic at heart, yet it manages to inform without bogging down. Its prose is fresh, light, a surprisingly easy read; the stories draw you in, evoking both players and events with ease. For fans as well as those with only a casual association to the sporting world, City of Champions reinforces and supplements history that is common knowledge, but goes beyond, demonstrating how sports money, culture, politics have shaped the Detroit, for better and worse, that we know today.

In other words, win or lose, City of Champions is a great read, both informing and entertaining. Readers will be rewarded with a deeper knowledge of the role sports has had in a great American city—and of that city’s role in the ongoing experiment that is America.

Mark Gorman is a practicing neurologist, owner of the Garage Mahal in South Hero, VT, and Detroiter in exile, currently residing in Portland, ME. He also serves as science editor-at-large for the Massachusetts Review.