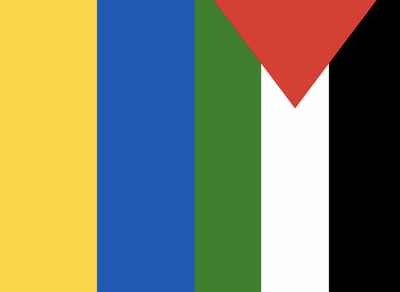 Like many of you, I’ve been glued to the news this past week following Putin’s senseless, illegal, and immoral war on neighboring Ukraine. Our eyes are filled with images showing the horrors of Russia’s invasion. We stand in solidarity with the people of the Ukraine and our hearts and thoughts are with all those affected by this tragic war.

As a Palestinian whose family was displaced and exiled, it is easy for me to identify with the suffering of the people of Ukraine and feel their anger towards the invading Russian army. The fear, the indiscriminate bombardment, the destruction, the scenes of women and children taking refuge in subways and underground shelters, and the ensuing massive refugee crisis are all too familiar to me.

War sets humanity backwards. In my book, all leaders—from Putin to Bush, Netanyahu to Assad—who drop bombs and kill civilians are war criminals. The Ukraine war brings painful memories of the American invasion of Iraq, the Israeli ground invasion and airstrikes on Gaza, the plight of the Syrian refugees, the tragedy in Yemen and Afghanistan and so many more.

What was unimaginable is now a reality. In a welcome change from the past, American and European leaders suddenly started using the long lost words and language of international law. They are rightly invoking “international law” to condemn Putin’s aggression—something we have not seen when violations of international law were committed elsewhere in the world. It is gratifying to see that they are capable of condemning illegal occupations when they choose to do so.

I often wonder about why we choose to selectively condemn violations of international law and human rights law? How can we see clearly the bombardment of Ukraine, but can’t see the bombardment of Yemen? How is it that we scream about the Russian occupation, but remain silent about the Israeli occupation? How can we open our borders to fleeing Ukrainian refugees, but shut them in the face of Syrian and other refugees?

A Palestinian can’t help but wonder. How can America and Europe send weapons to the Ukraine in order to fight an occupier, while at the same time send weapons to Israel in order to support its illegal occupation of Palestinian lands? How can we call for sanctions to end Russian occupation, but we impose bans on BDS, the boycott called for by Palestinian civil society as a form of nonviolent resistance? How can the West stand up to Putin’s crimes while at the same time support Israeli crimes of Apartheid?

And finally, while we are all focused on Russia, let’s not lose sight of what is happening here at home with the latest wave of book burners, the attempts by state legislatures to ban books, and the anti-LGBTQIA+ legislation they are passing in Florida and Texas.

Michel S, Moushabeck is the founder, publisher, and editor of Interlink Books.