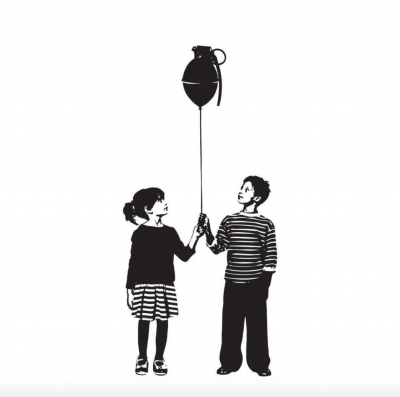 You hear that girls pretend to be mothers and boys soldiers. What I see are children playing intensely and seriously at life; like puppies they exercise and train with every move they make.

Wars drag them from one place to the next with no toys in their refugee baggage. Whereas adults collapse, weeping, they look around, keeping their eyes close to the ground—watching to see if other children are coming, or a dog, or maybe a bird. Suddenly they fall asleep, in slumber shaped like a fortress.

Of course, in the moment, children do cry out in fear—from the explosions and from the infectious fear of adults, whose job it is to keep them safe.

In the Warsaw ghetto, children would obtain food for their parents, threading through back alleys that led outside; by smuggling or begging, they’d scare up something to bring back home. They would risk their lives with each entrance and exit.

And when they were sent off from the orphanage to the traincars headed for Treblinka, they passed by in silence, in lines five across, holding hands.

In the wars of the ex-Yugoslavia, the smallest and skinniest kids would cross minefields, just to pick cherries to sell or bring back home.

The tiny amount they need for food starves larger sizes.

When they play war, they die a hundred deaths. The grownups should learn from them the truth of this hideous revelry, given the generic name of war.

And they endure it all. The childhood traumas that psychologists have described precisely will become their nightmares, recurrent and thus hermetically sealed. The dried-up imprint of a number tattooed on their arm.

Forced to work on shopfloors, in bars, and at market stalls, they keep family budgets balanced.

In my day, street kids no older than me would cling barefoot to the backs of trams and follow every American soldier, begging.

Empressed into service as soldiers, they’ve carried weapons as big as they are, and they are forced to killed or be killed.

Drowned at sea as refugees, turned back as adults despite their right to asylum. I see in them all the combative force of nature.

In his story “The Old Teacher,” Vasilij Grossman gave them their most compelling portrait, of which I will say nothing more, inviting others to track it down and discover for themselves.

Today more than a million children are journeying away from the country in War.

They are not fragile, they are the main strength, the diamond of any exodus, the vanguard that opens every door. Before them the waters of the Red Sea divide.

As I read in the Talmud, it is the fruit that protects the tree.

Erri De Luca is an Italian novelist, translator, poet, and activist. His most recent books are Impossibile and A grandezza naturale.