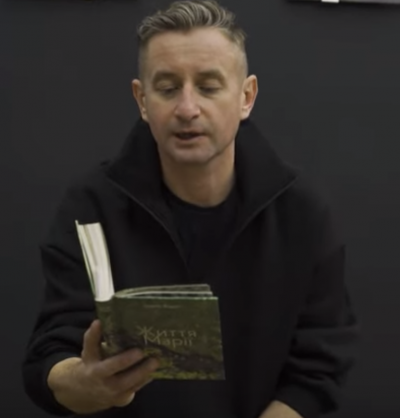 Editor's note: There are many ways to show solidarity with the people of Ukraine, and to stand for civilization, against barbarism. For the next seven days, we've decided to offer you a poem from Serhiy Zhadan, so that you will think of his words, and of his struggle today in Kharkiv, and of all the other heroic souls whose voices we have not heard, or heard sufficiently, as well as those we will never hear again: "incanting over every single / lost soul."

(A woman walks down the street...)

(Who could survive in the Middle Ages?...)

You led the regiments and liberated cities.
In the summer of 2014 you were thirty-five.
How many of you survived? Twenty out of a hundred.
Survivors usually don’t sleep well.

Three years ago you were changing the world.
You corrected it like a student’s paper.
The world can’t consist only of setbacks and tragedies,
can’t consist of mere losses.

It can be trained like a dog,
it should be reset like a dislocated shoulder.
Three years ago you felt how the heavens burn,
how a river flows through the black night.

Three years ago your regiments were formed,
the summer had just been born,
and the stretch of river you fought across
blazed up under the sun like a bird’s wing.

Three years ago death tracked you,
bitterness infused your language like sap in a stem.
Every morning you dream about a world—
broken by you,
understood by you.

Serhiy Zhadan is a Ukrainian poet, writer, essayist and translator. All poems featured here are part of a book of translations by John Hennessy and Ostap Kin published by Lost Horse Press, A New Orthography (2021), co-winner of the Derek Walcott Prize for Poetry 2021 and a finalist for the 2021 PEN America Award for Poetry in Translation. English translations of Zhadan’s other work include three books of prose (Depeche Mode, Voroshilovgrad, and Mesopotamia (which also features poetry) and a collection of poetry What We Live for, What We Die For.

John Hennessy is the author of two collections, Coney Island Pilgrims and Bridge and Tunnel, and his poems appear in many journals and anthologies. Hennessy is the poetry editor of The Common, a print magazine based at Amherst College, and he teaches at the University of Massachusetts, Amherst.

Ostap Kin is the editor of New York Elegies: Ukrainian Poems on the City and translator, with Vitaly Chernetsky, of Songs for a Dead Rooster by Yuri Andrukhovych and, with Ali Kinsella, of The Maidan After Hours by Vasyl Lozynsky.