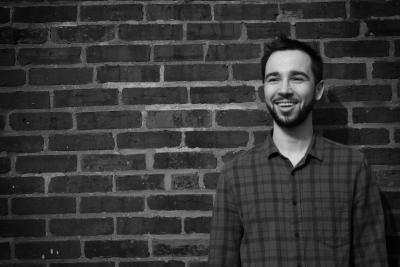 I didn't know many people who had gone to university. Neither Dad, nor Mom, nor my grandparents went. Still I knew more or less how university types dressed and even how they spoke, partly because my cousin was a veterinary student (though I barely saw him, and until he finally graduated, I wasn't entirely sure that he'd actually been studying for thirteen whole years like he claimed.)
—from "This Is a Pipe," Volume 63, Issue 1 (Spring 2022)

Tell us about one of the first pieces you translated.
When I lived in Uruguay in 2018, I discovered a good way of making friends: Inviting Uruguayans I wanted to get to know better to play a game of Settlers of Catan. One of my competitors turned out to be the writer Marcelo Damonte, and we soon collaborated on translating his short story “Todo talibán,” told from the perspective of the last survivor of a raft of migrants crossing the Mediterranean for refuge in Europe. Marcelo was a gracious collaborator and encouraged me to make the story my own. In English, I titled the piece “All Al Qaeda”—it can be found online in Issue 15 of Latin American Literature Today.

What writer(s) or works have influenced the way you write now?
Toni Morrison’s Song of Solomon, Kanishk Tharoor’s Swimmer Among the Stars, Rebecca Lee’s Bobcat and Other Stories—and anything by Roberto Bolaño, Maggie Nelson, and James Baldwin.

What other professions have you worked in?
I taught high school in Rhode Island for four years before getting my MFA in fiction at North Carolina State. I then taught English in Uruguay for a year, and for the past several years I’ve been living in Philadelphia and working in the nonprofit sector.

What did you want to be when you were young?
As a kid, I used to tell people that I would play in the NBA for five years, then the MLB for five years, and then move on to the PGA. Which shows that I had an inflated sense of my athletic ability and also that I could never pick any one thing for the fear of missing out on others, which remains true to this day.

What drew you to write a translation of this piece in particular?
When I came across Andrea Durlacher’s novel Esto es una pipa [This is a Pipe], I was thrilled by her conception of structure and character. When I finished reading, I immediately combed the text for an excerpt that could both function as a standalone piece while also evoking something essential about life in Uruguay.

Is there a city or place, real or imagined, that influences your writing?
The ability to create or express a place is what makes fiction worth writing for me. Often I find myself trying to evoke the peripheral spaces and sideyards of suburban childhoods, or strange encounters on street corners in a nameless city that’s usually based on Providence or Philadelphia.

Is there any specific music that aids you through the writing or editing process?
I tend to write, edit, and translate in silence, but in honor of this particular translation I’d be remiss if I didn’t acknowledge the general inspiration I get from Uruguayan musical icons Jorge Drexler, Ruben Rada, and Carlos Gardel.

Who typically gets the first read of your work?
I’ve helped co-found two writing groups—North Island and Los Matemates, the latter of which sprung out of my time at the Bread Loaf Translators’ Conference in 2019. Both groups have become a kind of literary home for me, and feedback from my workshopmates is how I take what feels like a promising idea and try to actually make something out of it.

You didn’t ask this, but the last readers of my work are nearly always my mom and dad. Both are retired journalists who instilled in me a reverence for the written word at a young age.

What are you working on currently?
Translating the poems of Uruguayan artist Ana Laura Pedraja. Writing a novel set in Uruguay that deals with the lingering aftermath of the country’s dictatorship of the 1970s and ‘80s. Working on a speculative thriller where a new technology promises to allow us to relive moments in life as if for the first time—with, of course, unintended consequences.

What are you reading right now?
Final del juego, a collection of short stories by Julio Cortázar. At the present moment, a character has had his head stuck in a sweater sleeve for going on four pages, which feels like a metaphor for the writing process.

TRAVIS PRICE is a fiction writer and translator of Spanish whose work has appeared in Tupelo Quarterly, pioneertown, jmww, and Latin American Literature Today, among other publications. After completing a Fulbright in Uruguay in 2018, Travis attended the Bread Loaf Translators’ Conference and has since translated the work of several Uruguayan writers, including Marcelo Damonte, Horacio Cavallo, and Ana Laura Pedraja. Travis lives in Philadelphia.