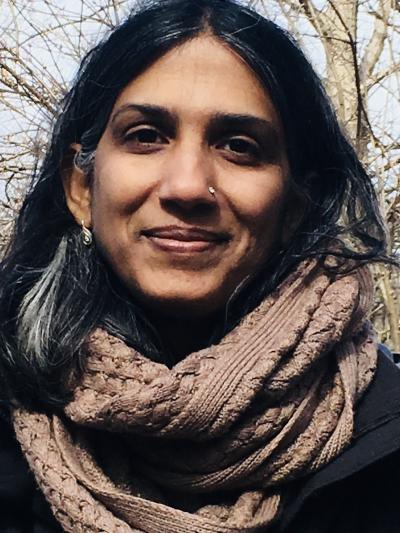 They came to meet him at the tiny airport in the town where he had attended medical college. As he went from his new house in Texas to the airport to New York and then London and Delhi, he had the sensation that the world was growing bigger and bigger. But on the final leg of his journey, the flight from Delhi to Nagpur, it all shrank back down again.
—from "Kabir," Volume 63, Issue 1 (Spring 2022)

Tell us about one of the first pieces you wrote.
When I was in fourth grade, I borrowed the family typewriter and wrote a story set in my neighborhood with a plot that was heavily borrowed from Heidi, which was my favorite book at the time. Many years passed before I tried my hand at fiction again.

What writer(s) or works have influenced the way you write now?
I have always been a reader, and I think that the works that have influenced me most as a writer are the ones that, just by existing, made it seem possible that I might write. I can remember reading Salman Rushdie’s Midnight’s Children in high school and being astounded to see something of myself in it: here was a story in which a character (albeit a minor one), prayed in the way that my dad prayed. Reading Michael Ondaatje’s Running in the Family a few years later made it seem reasonable to want to uncover one’s family stories, even after the rupture of immigration. And a line in Meera Syal’s book Anita and Me, about the daughter of Indian immigrants in Britain, expressed something about the stories I am drawn to telling: “I’m really not a liar, I just learned very early on that those of us deprived of history sometimes need to turn to mythology to feel complete, to belong.”

What other professions have you worked in?
For the last twelve years, I have worked as a pediatrician in a clinic for low-income patients. In 2016, I finished my PhD in the History of Science and Medicine, and now I also teach undergraduate classes on the history of healthcare for the underserved and the history of race and disease in American medicine.

What did you want to be when you were young?
I am not sure how old I was when I read My Side of the Mountain, about a boy named Sam who runs away from home and lives in the woods in a hollowed-out tree, but from the time that I read it, what I wanted to be was self-sufficient.   Or, to be more specific, that book’s version of self-sufficiency replaced the one I had from Pippi Longstocking, where Pippi’s ability to make her own rules seemed to be contingent on having a suitcase full of gold coins.  Sam didn’t need gold coins; he lived off the land.  I had no real knowledge of how to do this myself, so I mostly spent a lot of time hiding behind the branches of a weeping willow tree in my yard and daydreaming.

What inspired you to write this piece?
I wrote a story (“Farzana”) about a woman whose husband returns from Bangladesh changed after he goes there to attend his brother’s funeral. That story is about how she deals with the consequences of this shift; as I wrote it I found myself wanting to explore the circumstances of the husband’s trip home after having been away for many years. The characters in the two stories are not the same, but there is a continuity between them.

Is there a city or place, real or imagined, that influences your writing?
El Paso, Texas, the city where I lived until I graduated from high school, has probably influenced my writing the most. My parents emigrated from India in the early 1970s and moved to El Paso several years later, so that my dad could take a medical school job there.  My parents were joined by other immigrant families, from all over Asia and South Asia, who moved there for the same reason and formed a small community. Since I left El Paso, I have developed a better understanding of the history that led all these families to the same place and of the wonderful strangeness of the relationships they formed, and I am drawn to writing about how families in such circumstances make their lives in a new place.  I am also drawn to writing about India, as seen through the eyes of a visitor—either the immigrant returned home or the next generation—and the ways that family stories and histories must compete with the reality of place.

Who typically gets the first read of your work?
My first reader is my good friend, the artist Leslie Carmin.  We have been encouraging each other to make time to do our respective creative work since our oldest kids were in preschool together.

If you could work in another art form what would it be?
I would draw!  A few months ago, I got a copy of Lynda Barry’s Making Comics and I have been having a lot of fun doing the drawing exercises in the book.  I really like that her practice of art is rooted in paying attention.  I’ve been drawing a quick self-portrait (one of the exercises in the book) almost every day for the last two months and even though I am not very confident about my drawing, I find I get lost in the process of making.

What are you reading right now?
Lately I have been reading what I find by browsing the shelves of my local public library. I particularly like to look in the low 800s of the Dewey Decimal system, where one can find poetry and essays on adjacent shelves. I am currently reading Elizabeth Alexander’s poetry collection Crave Radiance and Ali Smith’s fiction-essay hybrid, Artful. Fiction-wise, I’ve just finished Rachel Cusk’s 2007 novel, Arlington Park, and am in the middle of Yu Miri’s Tokyo Ueno Station.

SAKENA ABEDIN is a pediatrician and a lecturer in the History Department at Yale.