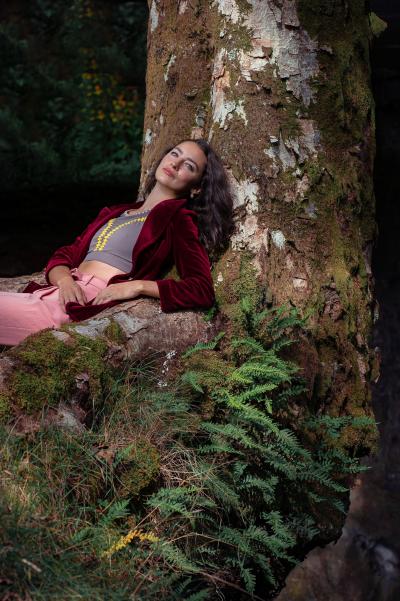 If I write myself into a state, does that make the state false?

In the background of one of the many pictures I take of Patrycja by the feeding ring,
two of the horses bit each other.

Without violence, how do I understand my life as meaningful?
—from "Eastern Washington Diptych," Volume 63, Issue 1 (Spring 2022)

Tell us about one of the first pieces you wrote.
I remember, in my journal when I was really young, including lies as little gotchas, which I would reveal to be false on the subsequent page just in case a friend or my stepmother stole my journal, as a way to punish and shame them (but also, I think, to entertain?). I was obsessed by the idea of an audience, apparently, even in that private space. Maybe that same impulse is why I write poems now.

What writer(s) or works have influenced the way you write now?
The influence I’m most aware of is the poet Brigit Pegeen Kelly. Though her work tends to be more lush than mine, sonically—and way more spellbinding and original, generally—there’s something in the spirit of her poems that feels kindred and sacred to me, in a way that’s difficult for me to explain. Maybe we share a moral fear? I don’t know. I never got to meet her in person; I only have her poems, combined with anecdotes from others, to know her by, so there’s a parasocial indecency to my sense of connection, of which I am painfully aware. I’m vexed by competing desires when it comes to BPK: the desire to write about her and her work and what it means to me, and the desire to respect what was by all accounts her fiercely private way of being. I have a long poem in my forthcoming book Judas Goat, which started out as an essay, where I try to understand my connection to BPK and her work a bit; it’s the final piece I needed to write to “finish” Judas Goat. I will probably always feel conflicted about that poem, and any piece that names her, because I can’t know if she would bless that sort of engagement, or forgive it, or not. I hope her spirit isn’t watching me like “Who is this random-ass acolyte I did not ask for??”

What other professions have you worked in?
I do freelance editing, manage the Parlor at Open Books: A Poem Emporium, and teach through various literary nonprofits and the University of Washington Rome Center. I have an extraordinarily lucky life. In the past I’ve tutored, sock modeled, gift wrapped during holiday seasons, worked in daycares. The word “profession” has a certain polish and air of long-term commitment that doesn’t apply to much I’ve done, honestly. The only thing I’ve received formal training for and committed to with any real track record is poetry and all the ancillary endeavors that connect people to poems—meaningful but precarious work that pays very little—so I’m lucky as hell to be hitched to someone whose labor is valued more highly in this current capitalist system, who can pay the rent (though of course this is another form of precarity, as many full-time caregivers know). There’s a tragic lack of material support in the U.S. for people whose passions and skills revolve around making, celebrating, and connecting people to art, and I’m just not cut-out for anything else, I’m afraid.

What inspired you to write this piece?
Jenny Xie’s diptych poems in Eye Level were in the air when I first drafted “Eastern Washington Diptych.” I was away for the weekend with Patrycja Humienik (amazing poet, art wife, beloved), on some rural property in Eastern Washington State, and we were talking about Xie’s book a lot at the time—She was reading me lines, reading it in the bath. I was in a super frustrated place with my writing then. I’d been working on Judas Goat for so many years—for so long the book had felt close, but not complete, and I was desperate for some sort of rupture in my thinking, in my style. I tried to funnel that frustration into the poem by letting little snippets of image and thought leap around with some abandon, while remaining tightly contained in physical space.

Eventually, it became important to me that the poem begin and end with a question. Structurally, the chiasmus of the interrogative felt right to the hinged, bi-valvey, 2-part, I/you mirror of the poem's form overall. For me, having questions frame the poem enacts both an entrapment and a relentlessness of inquiry, both of which, in tandem, fortify the primary impulse of the poem.

Is there a city or place, real or imagined, that influences your writing?
I grew up in the Deep South, in and around Birmingham, Alabama, and I didn’t move away from that region until my early twenties, so it’s in my bones for sure. When I was born, my parents lived on a farm outside of Birmingham, and it’s interesting how that house and land, which I couldn’t possibly actually remember from infancy, looms so large in my brain. I guess it’s like my Eden? I never knew my parents together, so the idea of all three of us living under one roof someplace, among those animals, it became a kind of fantasy. When I write poems I often go there, mentally. I’m sure the Pacific Northwest influences my writing too, since that’s where I live now—the grungy city vibe of the neighborhood I live in, the grayness, that gorgeous ice-glazed volcano visible from the bus, all that water; I don’t know how it’s influencing me, beyond the occasional image, but I’m sure it seeps in, as everything does.

Do you have any rituals or traditions that you do in order to write?
I love the idea of writing rituals (and I’m increasingly fascinated by how ubiquitous this question is in interviews!). While there are things I enjoy pairing with the writing process—delicious beverages, fresh or dried flowers on the desk, candles, various scents like pipe tobacco and perfume samples, aspirational texts (books I love, quotes I love), sunlight, foreign cities, the option to sit or stand—no, I don’t think I actually have any rituals or traditions for my writing anymore. As I age, I feel less enamored with regimens and crave the stimulation of novelty more than anything. Lately I write in my black Leuchtturm journal, in my Notes app, in Scrivener, in Google docs, on scrap paper, wherever and whenever and however I’m compelled. It’s all a bit of a mess.

Who typically gets the first read of your work?
When I have a new poem draft, I seek out feedback from friends who are brilliant poets. I’ll send it to Luther Hughes and Dujie Tahat (my cohosts on The Poet Salon podcast); or Keetje Kuipers, Rachel Edelman, and Abi Pollokoff (with whom I meet for a casual workshop once a month); or Patrycja Humienik, Erin Lynch, and Erin McCoy (with whom I’ve maintained, remarkably, a near-weekly draft exchange for several years).

If you could work in another art form what would it be?
I can, and do, play with other art forms! I’ve experimented a fair amount with drawing and digital collage, making poetry comics. The last few years I’ve gravitated more to figural sculpture and video/film.

What are you working on currently?
When it comes to my writing, these days I’m mainly just getting ready—emotionally and logistically—for Judas Goat to drop in 2023. I haven’t been writing poems lately, but I’ve been gathering research and fragments and questions for future writing, focused more explicitly on my home state of Alabama. I’m dreaming up some short film projects, in the orbit of Judas Goat, that I’m excited to play around with, potentially collaborating with my mama, who’s a photographer. And, as always, I am working privately and alonely on fiction, which I probably will never show anyone.

What are you reading right now?
Everything! After two pandemic years of being unable to read much, I’ve been on a ravenous reading tear the last few weeks. Most recently I devoured Sculpting in Time, essays on filmmaking by Andrey Tarkovsky; Motherhood by Sheila Heti; Tides by Sara Freeman; Customs by Solmaz Sharif; A Hundred Lovers by Richie Hofmann; and I Watch the Boughs, a chapbook by Emily Lee Luan. I’ve been reading a lot of unpublished poetry manuscripts too—incredible work I can’t wait to see become books one day. Currently I’m in the middle of Viktor Shklovsky’s bizarre epistolary novel Zoo, or, Letters not about love, and I’m rereading Gwendolyn Brooks’s The Bean Eaters. Thank god for books. I honestly do not know who I would be, or how I would live, without them.

GABRIELLE BATES is the author of Judas Goat, forthcoming from Tin House in 2023. Originally from Birmingham, Alabama, she currently lives in Seattle, where she works for Open Books: A Poem Emporium and co-hosts the podcast The Poet Salonand teaches occasionally through the University of Washington Rome Center. Her poems have appeared in the New Yorker, Poetry Magazine, Ploughshares, American Poetry Review, and BAX: Best American Experimental Writing. www.gabriellebat.es or on Twitter (@GabrielleBates).