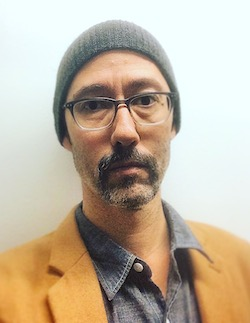 I found a pensión in the Barri Gòtic, not far from La Rambla. An old woman with a limp welcomed me and took my money and showed me to my room. I seem to remember that one of her shoes had a thick heel and sole (to compensate for, I suppose, an abnormally short leg), and that she stumped and shuffled ahead of me down the hall. But maybe I am misremembering this. Maybe instead it was a lazy eye. Or was she missing an arm? I don’t know, only that something about her was off, misaligned.
—from "City of Strangers," Volume 63, Issue 2 (Summer 2022)

Tell us about one of the first pieces you wrote.
When I was about 11 or 12 I wrote and illustrated a derivative fantasy about a young hero who fights a dragon that emerges from the crack of a lone mountain.

What other professions have you worked in?
I don’t consider writing my profession; it’s never made me any money to speak of. When I was younger I did mindless retail work, and I briefly taught ESL abroad. I’ve been teaching high school English for the past seventeen years.

What did you want to be when you were young?
When I was thirteen or fourteen, I remember wanting to be either an artist, a musician, or a soccer player, which were simply the three things I enjoyed doing at that age. What I realized as I got older was that I just wanted to avoid the workaday world. I failed at that, of course.

What inspired you to write this piece?
Years ago, when I was in my twenties, I traveled for several months around Morocco and Spain (trying to avoid the workaday world). When I returned I spent a long time attempting to turn some of the experiences I had on that trip into fiction.

Many years later, in 2016, I returned to Spain with my mother and brother to visit my mother’s family. I was now a middle-aged man—a father, a husband—and being back in Barcelona twenty or so years after that earlier trip left me full of a strange sense of my younger self. I was jet-lagged for the first few days we were there, and walking around in that under-slept state—remembering certain streets, certain plazas, certain cafes where I had sat as a solitary young traveler—was like walking through a strange dream: familiar and foreign at the same time.

Back home I began writing about my earlier trip—the one I took in my twenties—as a memoir, trying to remember the details that over time had faded or been warped by the fictionalizing I had done in some of my earlier writing. I enjoyed plumbing my own memories, finding specific details that I seemed to have forgotten. But it wasn’t long before a rather fictive element began to assert itself, and so parts of the memoir became rather speculative. “City of Strangers” is one of those parts.

Is there a city or place, real or imagined, that influences your writing?
Not a specific place, but travel and writing seem deeply connected to me. I’ve always enjoyed “traveling” through books, going all the way back to my childhood adventures in Narnia and Middle Earth. My own stories often involve physical journeys, and often foreign locales that I have traveled through inspire stories. The way that memory transforms places interests me. It’s often better, I think, to write about a place from a distance, to let distance and time transform it a bit.

Do you have any rituals or traditions that you do in order to write?
Rituals and traditions seem like luxuries I have no time for. I wonder if sometimes they might become excuses for avoiding writing. I’ve come to the point where I just have to sit down to the work in some sort of regular fashion—even if it’s only for an hour, even it all I do is read over what I did the day before.

Who typically gets the first read of your work?
No one in particular. Often whichever editor of whichever journal I send my work to. Sometimes my wonderful wife.

What are you working on currently?
A very long novel.

What are you reading right now?
Three Rings by Daniel Mendelsohn. I am also half-way through Elena Ferrante’s Neapolitan Quartet. And when time allows I am generally picking through some literature in Spanish, hoping to become more fluent in reading in that language: Roberto Bolaño, Alvaro Enrigue, Borges…

MATTHEW RAYMOND earned his BA in English from the University of California, Santa Barbara. He is the author of the chapbook "The Muddy Season" (Black Lawrence Press, 2016). His stories and poems have appeared in or are forthcoming from Gettysburg Review, New Letters, December, Beloit Poetry Review, Free State Review, Pidgeonholes, Permafrost, and other places. He is at work on a novel.