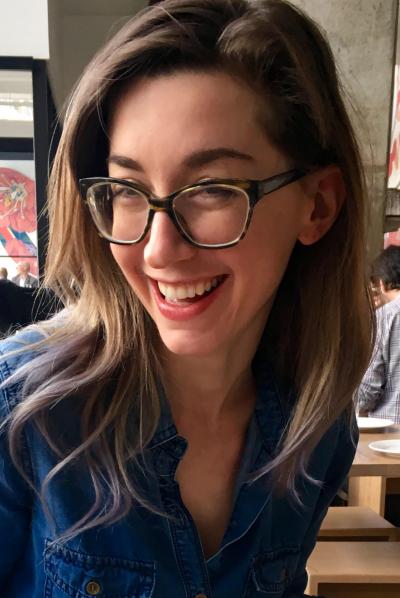 You’re dead for so long and young just a little. So why not
kiss if there’s kissing on offer? There isn’t much time
to be beautiful, and even less to know it. Even now,
you are losing your poreless luster.
—from "Middle-Aged Sonnet," Volume 63, Issue 2 (Summer 2022)

Tell us about one of the first pieces you wrote.
As a teenager I wrote a vampire novel—or I tried to write a vampire novel. The main character was very tortured for Mysterious Reasons and very little happened. Fortunately, it’s long lost and the world is better for that. Most of my early work was just thinly veiled recounting of my personal angst. That hasn’t really changed.

What writer(s) or works have influenced the way you write now?
My early formative artists were Marguerite Duras, Louise Gluck, D.A. Powell, Lucy Brock Broido, Jorie Graham. I’m not sure any of that really shows in my work, but it’s there, baked in. Later, it was Catie Rosemurgy, Dorothea Lasky, Brigit Pegeen Kelly. I’ve learned a great deal about the line from reading Carl Philips; I think he’s masterful. A book I’ve returned to again and again is Crush by Richard Siken. The last book I really loved was Jericho Brown’s The Tradition.

This is a hard question to answer. Everything you read influences you in some fashion—you want to emulate it, you want to question it, you want to honor it, you want to argue with it, you want to destroy it—I can’t imagine reading something and not having some sort of response, conscious or not. That’s why it’s important to read work that isn’t necessarily to your taste – you can learn from it regardless (and maybe you’re wrong).

What other professions have you worked in?
I currently teach and have for a long time. But before that, I was a debt collector for a company that did house appraisals, I worked in the children’s section of a bookstore, I worked for a temp agency, and I was a property manager for a 114-unit apartment complex. I did get fired once, from a summer job at the business school at Notre Dame. It was ostensibly because they ran out of work for me, which I knew might happen. But then the woman firing me let me know it was also because no one liked me. I’ve been chasing that career high ever since.

What did you want to be when you were young?
I always wanted to be a writer, but as a teen I thought that being a writer was being Anais Nin, hosting glamorous, costumed literary salons, and drinking champagne from a woman’s clavicle while my lovers fought over my favors. Being an actual writer has been immensely disappointing.

What inspired you to write this piece?
I’ve always really loved the poems whose main thrust is essentially, “life is short; let’s have sex,” such as Marlow’s “To His Coy Mistress” and Herrick’s “To the Virgins, to Make Much of Time.” They interest me because on the one hand, I agree with the general sentiment, but on the other, the stakes are a lot higher for the women in these poems then for the men. My poem is also trying to persuade the beloved to have sex—while acknowledging that desire is influenced by so many societal expectations about gender, marriage, having children. I don’t know if we really can see all that clearly until we are middle aged, or at least, I didn’t. Can we step outside all of that? I don’t know.

Is there any specific music that aids you through the writing or editing process?
I tend to pick music that matches the pace or emotional tone of what I’m writing. I used to write a lot to Joanna Newsom, First Aid Kit, Agnes Obel, Halsey, Explosions in the Sky.

These days I listen to almost entirely instrumental music when I write, or music in a language I don’t know. I prefer indie video game soundtracks like Braid or Night in the Woods, movie soundtracks for repressed period dramas where people have deep feelings but never speak them aloud, or anything that a coder with depression issues would gravitate towards.

Most recently, I listened to the soundtrack to the Loki tv show for about three months straight. Before that, it was the Westworld soundtrack. If I find something that works, it’s all I listen to because it helps me immediately dip into my writing headspace.

Do you have any rituals or traditions that you do in order to write?
I used to have rituals. I liked to light a candle, have my tea ready, my room had to be clean, etc. Eventually I realized that these were procrastination points. It was easy to tell myself that I couldn’t write because my room was messy, and before I knew it, I’d started reorganizing the closet. So, I’m ritual-free at this point. I like to have a cup of something warm when I write, especially in winter, because my fingers get stiff. But that’s about it.

Who typically gets the first read of your work?
My husband, the artist Mark Stafford, is my best, and hardest reader. I use him mostly for prose, however. He asks very difficult questions of a work, and my poems can’t withstand that sort of scrutiny in their early stages.

This past year, I wrote a poem a day for a month with the poet Jimin Seo, and he read my very roughest poems. At the end of the month, we video-conferenced and gave each other feedback on what we’d written. It’s wonderful to have such trust with another poet that they can see your work through all its stages.

What are you working on currently?
I’ve put together a manuscript of poems about husbands, so I’m fussing over that. I’m revising a young adult novel about young women beating up sexual predators. I’m also working on some odd essays about American masculinity.

What are you reading right now?
I’ve just finished reading “Women, Eating” by Claire Kohda, and I can’t recommend it enough. It’s a fascinating take on vampires, the art world, race, colonialism, and desire. That sounds like a lot, but the book integrates all those themes masterfully. I couldn’t stop reading and was thinking about it days afterwards.

Rebecca Hazelton is an award winning poet, writer, critic, and editor. Her first book, Fair Copy, won the Wheeler Prize from Ohio State University Press. Her second book, Vow, was an editor’s pick from Cleveland State University press. Her most recent book of poetry, Gloss, was published by the University of Wisconsin University Press, and was a New York Times “New and Notable” pick.