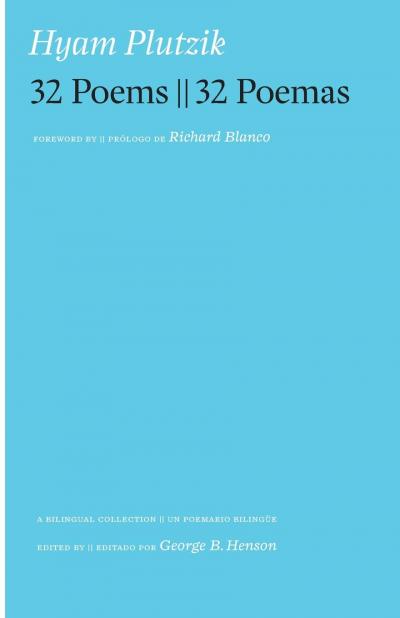 32 Poems/ 32 Poemas (2021) is a fully bilingual (Spanish and English) collection of selected poems by the twentieth-century American poet Hyam Plutzik (1911-1962). The three-time finalist for the Pulitzer Prize in poetry was born in Brooklyn, New York, to Jewish immigrant parents from Belarus. Plutzik, who was a Professor of English at the University of Rochester until his premature death in 1962, grew up in a non-anglophone household, where Russian, Hebrew, and Yiddish were the languages spoken. Plutzik did not learn English until he attended grammar school in a schoolhouse in Connecticut. His immigrant experience deeply resonates with many of the authors published by the Miami-based independent publisher Suburbano Ediciones, committed to fostering a cross-cultural community of writers and readers and giving recognition to literature published in Spanish in North America.

Despite the strikingly different cultural and ethnic backgrounds, President Obama's inaugural poet Richard Blanco, a son of Cuban-exiled immigrants, finds multiple affinities between his experiences and those of Plutzik, a poet with roots in Eastern Europe. In his foreword to this volume, Blanco posits that poetry is a “mutual home” (8) for both. In poetry, they strive for very similar objectives and grapple with similar obsessions, such as surpassing transcendence and quelling their inherited longing for home. As a Latinx poet, Blanco engages in a borderless and timeless dialogue with Plutzik’s poetry by drawing a comparison between their formative years as children of immigrants, suggesting that “[Blanco’s] 1968 Miami merges with Plutzik’s 1911 Brooklyn.” Thus, Blanco’s preface situates this collection of poems as a relevant contribution to today's dialogues on cross-cultural collaboration by pointing out that “[their] languages blend as one ‘[i]n the one, shadowed sea where all things melt,’ as [Plutzik] predicted in “I Imagined a Painter Painting Such a World.” (12)

His poems have already been translated into Chinese, Croatian, German, Hebrew, Russian, and Yiddish, but this is the first Spanish translation to be released. Literary translation is a demanding craft, requiring skill, rigor, and creativity, and the fourteen translators who participated in this bilingual collection poignantly and successfully render the beautiful, insightful philosophical poetry of Hyam Plutzik. His complex poetic meditations on life, nature, time, and death draw readers to dive into the poems repeatedly. These translators, who share the same language but belong to different cultural backgrounds within the Spanish-speaking world (e.g. Argentina, Colombia, Cuba, Dominican Republic, Spain, etc.), strategically come together in an organic and seamless way, articulating a collection of poetry that reflects their differences, but stimulates the opening of dialogues that transcend cultural boundaries.

The contributors do not provide a co-authored translators’ note, due to the collaborative nature of this bilingual collection, which further reinforces the literary value of their work as a whole. This book does not read as a purely editorial work of translation, and I would argue that the absence of translators’ commentary provides them with the agency and creative license this project required. This collection thus defies certain stigmas of literary translation. and may be read as a legitimate artistic work. For instance, some translations maintain a similar rhyme scheme from the English poem; nevertheless, most of them play around with rhythms, meters, and prosody. Carlos Pintado, an award-winning Cuban American poet and translator himself, gives a very ingenious twist to Plutzik’s poem “The Last Fisherman” by not only experimenting with rhyme, but also by changing the order of the lines in the last stanza to further emphasize that the poem is emotionally imbued with the passage of time: “Time runs out as the hook lashes the water/ Day after day, and as the days wane” (24) becomes “Día tras día el tiempo acaba/ Mientras su anzuelo fustiga el agua.” (25)

Plutzik’s poems examine his subjective and unique relationship to nature and modernist and post-war themes such as the paradoxes of time, alienation, and anxiety while making an attempt to elucidate the connections between religious discourse and science. In “If Causality Is Impossible, Genesis is Recurrent,” he writes “The sum of Being, being discontinuous, / Must presuppose a  God-out-of-the-box/ Who makes a primal garden of each garden.” These are topics especially significant today because they help us to combat the turmoil and distress caused by dark times such as the ongoing Covid pandemic. The mesmerizing vitality of Plutzik’s poetry does not resemble the despair of his contemporary poets, and this energizing quality is effectively captured by these translations. Now, both Spanish and English readers, especially those who have felt displaced and hopeless (e.g. immigrants, exiles, etc.), have the opportunity to find comfort in the words of a poet who crossed linguistic borders—even before these translations came out.

This slender but robust bilingual collection is a concerted endeavor to pay tribute to an American poet whose work has not received the literary appreciation it deserves. Edited and with an introduction by the prominent Spanish-to-English literary translator George B. Henson, this collection is an act recuperating the legacy of a lyrically gifted Jewish American poet. Henson points out that this collection is “a gesture toward not only reviving the memory and work of a brilliant American poet but also a step toward making his work universal.” (16) Therefore, these poems are not only a step forward for nowadays’ burgeoning conversations on cross-cultural collaboration, but also the seed that can help Plutzik flourish as an internationally recognized poet, going beyond the Anglophone sphere to be enjoyed by Spanish speakers.

AITOR BOUSO GAVÍN holds a B.A. in English Literary and Linguistic Studies from the Universidade da Coruña. In 2018, he earned an M.A. in Advanced English Studies, with a focus on Literary Studies, from a joint program between Coruña, Santiago, and Vigo Universities. From 2018 to 2019, he was a Foreign Language Assistant in the Spanish Department at the College of the Holy Cross in Worcester, Massachusetts. He is currently a Ph.D. student and Teaching Associate in the Spanish and Portuguese Program at the University of Massachusetts Amherst. His research interests include Chican@/x and Latin@/x Literary and Cultural Studies; Multiethnic and American Literature; Contemporary Latin American and US Latinx Art; Performance Studies; Body Studies and Somatic Theory. Aside from that, Aitor has been working with translation and interpretation since his sophomore year as an undergraduate student and is a native speaker of Galician and Spanish with knowledge of Portuguese, Italian, and French.