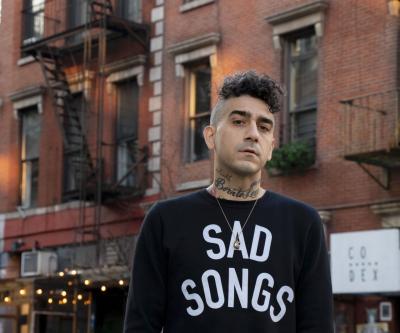 “i thought i saw your face, your unmistakable
gait on the 6 train
—i’m wrong.
blessings refused maybe
or imagined.”
—from “on Survivor’s Guilt, ending with ‘Ruff Ryders’ Anthem’ by DMX,” Volume 63, Issue 2 (Summer 2022)

Tell us about one of the first pieces you wrote.
All I can remember is that I was 8 or 9 years old, it was titled “Despair,” & I was pretty heavily aping Kurt Cobain. That should tell you pretty much everything you need to know about how & why I turned out the way I did.

What writer(s) or works have influenced the way you write now?
Honestly, I learned to write poetry not from poets but from rappers. I grew up in the projects, ensconced in the culture of hip hop, & to say that it was formative is an understatement. From the inventive uses of syntax, metaphor, rhythm, rappers are the best writers who ever committed themselves to the pen; rappers are better than poets. I can trace pretty much every line I’ve ever written back to hearing Nas rap, “I never sleep ‘cause sleep is the cousin of death,” or AZ on “Life’s a Bitch” rapping, “visualizin’ the realism of life in actuality.” That shit had me rethinking what language can do. Illmatic was the Bible to me. Lil Wayne’s ability to deconstruct & reconstruct syntax in ways that are jarring, disarming, & that force endless double takes. 2Pac’s ability to be vulnerable with a razor’s edge. Ghostface Killah’s almost Lynchian take on drug noir or interpersonal narratives. These are the folx who helped me build my foundation.

I didn’t start reading capital P Poetry until I was an adult. Kaveh Akbar & Hanif Abdurraqib were incalculably influential on my manuscript. Jessica Abughattas & Alex Dimitrov have been the poets who have inspired what I’ve been working on lately.

What did you want to be when you were young?
There was never a point where I didn’t want to write. That’s all I knew then & it’s almost all I know now.

What inspired you to write this piece?
This is a loaded question that requires a loaded response. My best friend overdosed 8 years ago. It was the first blow in a series of blows that led me to getting clean & sober, but not before I narrowly escaped my own death multiple times. In my years of recovery, I tried & I tried to write this poem, but of all of the trauma I wrote about, this was the one trauma that eluded me. Last year, I met up with my beloved, the brilliant poet Ghinwa Jawhari, in Prospect Park, where we sat & discussed the myriad ways we can or sometimes fail to unpack trauma. A man nearby was wearing a DMX t-shirt & bumping “Ruff Ryders’ Anthem,” not long after he’d passed away—a passing I did not take well. I still have a difficult time coping with X’s death, as influential as he was & remains to me, the death of an addict in & out of recovery, in their struggle, always hits a different way, as someone who has, so far, beaten his demons away from the door. Between talking with Ghinwa & coming to terms with not just my grief from the past but my grief from the present—the very real idea that our grief is always with us, that we never get over it, we just learn to carry it more gracefully, sometimes, if we are lucky—this poem finally popped into my head. I am ever grateful to her—when I say this poem took 7 years to write, I mean that in every way you can imagine, but also quite literally.

Is there a city or place, real or imagined, that influences your writing?
New York City is alive & throbbing in everything I write, in everything I do, in every breath I breathe. Paris is also present. As a ghost.

Is there any specific music that aids you through the writing or editing process?
Weirdly, given how much my poetry is informed & shaped by music, for the most part, I can’t listen to music while I write. I write to music in my head, & music outside of that will drown it out. There have been some exceptions—if a particular song sparks an idea, that song needs to be present. Last summer, I wrote a sonnet while listening to “God is in the House” by Nick Cave & the Bad Seeds on repeat for hours. Recently, I revised a poem while listening to all 14 minutes of “Bay of Pigs” by Destroyer on repeat.

Do you have any rituals or traditions that you do in order to write?
Respect, obey, & listen to my subconscious. That is all. That is everything.

If you could work in another art form what would it be?
I’d kill to be a filmmaker. David Lynch inspires my work as much, if not more, than any poet or writer.

What are you working on currently?
I just finished the manuscript for my first book, Murmurations, with the help of Celina, whose deft hands on its pages the book would not exist without. I’m currently in the embryonic stages of an idea for a second book, but it’s slow goings, as it should be after such a labor as completing one book, so I’m sort of in the gathering stage, listening to my subconscious as best as I could, letting poems come when they will, but mainly trying to make space for joy in my life, with beloveds, with nature, with the city, with any kind of nourishment I can find.

What are you reading right now?
Having just finished a book, the idea of reading one has been really overwhelming for me lately. I hope that changes soon, but in the mean time, I’ve been finding bewilderment—my absolute favorite emotion—in the poems of Jaz Sufi, who is unthinkably fucking brilliant, & doing such sharp, expansive, & probing work with evolving imagery & metaphor. I can read her all day. My beloved, Hazem Fahmy, whose most recent book, Waiting for Frank Ocean in Cairo, is goddamn stunning to the point I can’t believe it’s a real thing living in my hands. Noor Hindi is one of my favorite poets on the planet & everything she puts out is invariably godsent.

As ever, I find endless gratitude & reasons to live in the work of Ross Gay. Bless his soul.

ANTHONY THOMAS LOMBARDI is a multiple Pushcart-nominated poet, organizer, activist, and educator. He is the found and director of Word is Bond, a community-centered reading series partnered with AAWW that raises funds of transnational relief efforts and mutual aid organizations and currently serves as assistant poetry editor for Sundog Lit. A recipient of the Poetry Project’s Emerge-Surface-Be-Fellowship, his work has appeared or will soon in Guernica, Gulf Coast, Colorado Review, Denver Quarterly, North American Review, and elsewhere. He lives in Brooklyn with his cat, Dilla.