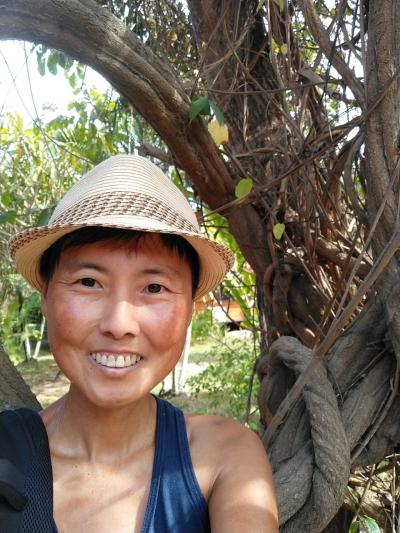 When I was small like
a selfish idea
I would pick pieces of his hair
off my smooth girl-body
swollen
in the dark places
where he had become light
—from "Triptych," Volume 63, Issue 3 (Fall 2022)

Tell us about one of the first pieces you wrote.
After a long hiatus from writing after high school, I took it up again when I was 33. The first piece I wrote was an excerpt in what will soon be my memoir, although I didn’t know it at the time because I was about to die. My illness got me into writing again though, and writing in part saved my life.

What writer(s) or works have influenced the way you write now?
I have been a longtime admirer of Donna Tartt’s The Secret History as well as the Irish, such as Anne Enright, Paul Murray, and Eimear McBride. I also tend to love Muslim writers like Tayeb Salih, Hanif Abdurraqib, and Rabia al-Adawiyya. There’s a certain sensibility I’m drawn to from Nietzsche to Douglas Stuart to Joseph Boyden to Ishiguro so it’s less about demographic or locational specifics than it is lineage of voice. Clarice Lispector and Carolyn Forché are perhaps my favorite writers at present. I also really draw off standup from comics like Eddie Izzard and Margaret Cho and memoirs of comedians like Rob Delaney and Tina Fey. For a lack of a better word I’m always in it for the lyrical duende or wordsmithed laugh.

What other professions have you worked in?
The most glamourous I can say is a research assistant at Harvard, which ranged from building websites for the National Institute of Health to running to CVS to buy my boss cases of Diet Pepsi. Lately though as I come into my own, I’ve become a book doula to help others birth their work, I’ve taught a memoir class, and I’ve hosted panels for writers and others in the publishing industry—mostly BIPOC—and soon for those working with psychedelic medicines.

I’m currently in training to become a Compassionate Inquiry Practitioner to bring the work of physician, writer, and trauma-whisperer Dr Gabor Maté into the memoir workshop space as well as to support others who are healing with ancient medicines. I plan to offer Compassionate Memoir retreats all over the world when the time comes, especially at Nacia, a plant medicine integration center opening in Costa Rica.

What inspired you to write this piece?
Poetry comes to me. I transcribe for the most part. With poetry I still feel like I really don’t know what I’m doing and also I am just writing down what comes through me rather than generating words. So when I sat down because the timer was going off in my word oven, it came out and I tried to understand it. I had been processing my abuse with prose for my book, but I think it needed another outlet.

Is there a city or place, real or imagined, that influences your writing?
I don’t know how to answer that. I think certainly I’m drawn to how people from different places think and speak — I love to channel voices and the sensibilities of others onto the page. And I love to travel both with medicine as well as physically. But I write mostly from the liminal space I tend to find myself in and am always trying to enter more deeply, because that’s where the tiny point in the multi-dimensional Venn diagram all my worlds meet. I think it makes more sense to say there are times in my life that influence my writing and that the places are where those times happened to be. Usually before people died.

Do you have any rituals or traditions that you do in order to write?
I have my tea or cacao ready, try to clear my mind, and sink into my body and that liminal space. Then I try to trust and listen to the quietest voice and block out the loud ones.

Who typically gets the first read of your work?
My bestie Lisa in Toronto who’s a fellow medicine traveler, word renegade, and genuine fan of my work.

If you could work in another art form what would it be?
I’d be involved in theater or performance art like a drag queen in the 1950s or a chanteuse in the 1930s. But I’d have to become far less repressed for that. Also probably dead.

What are you working on currently?
I’m in final revisions with my agent for my memoir chronicling my journey to finding ayahuasca, which quite literally resurrected me from my deathbed.

I’m also working on a book of poetry. But don’t tell anyone.

What are you reading right now?
I’m flying through an advanced copy of Gabor’s forthcoming book The Myth of Normal, his magnum opus which diagnoses and offers treatments for our very sick modern/Western culture through his doctor-philosopher-plant spirit lens. He has supported me in many ways on my path with ayahuasca and the original jungle pharmacy. It’s an honor as well as jarring to see myself through his eyes and in his pages. I love that we’re in each other’s books and hearts, and it’s a joy to see how my story fits into the larger one he is telling about our world as it enters a new one.

MEE OK ICARO is an award-winning literary prose stylist and occasional poet. She is the winner of the inaugural Prufer Poetry Prize, runner-up in the Prairie Schooner Creative Nonfiction Contest, and a finalist for the Scott Merrill Award for poetry as well as the Annie Dillard Award for Creative Nonfiction. Her writing has appeared, or is forthcoming, in the Los Angeles Times, Boston Globe Magazine, Georgia Review, Bennington Review, River Teeth, Witness, Pleiades, Michael Pollan’s “Trips Worth Telling” anthology, and elsewhere. She is also featured in [Un]Well on Netflix and is attempting to write a memoir.