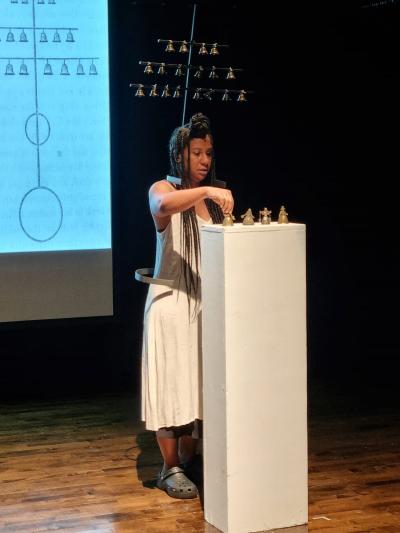 I've always admired the way Alison C. Rollins's poetry bridges urgency and experimentation. In her hands, objects from the archive are transformed into poetic vectors to imagine other worlds, other possibilities. I've also been following and admiring her recent experiments with creating physical objects from this poetic process. When we received her exquisite poem, "A Bell Is a Messenger of Time" for the Fall 2022 issue of MR, I was amazed to also learn about Rollins' use of metalwork and performance to continue her lines of inquiry. The artist was kind enough to share some photographs and notes on the project, which we are thrilled to share with you all here.—Franny Choi

Franny Choi: Please tell us about the archival image you found.
Alison C. Rollins: While conducting research on Black fugivity, I discovered the archival image labeled “A woman with iron horns and bells on, to keep her from running away” in the New York Public Library’s digital collection which houses materials from the Manuscripts, Archives, and Rare Books Division of the Schomburg Center for Research in Black Culture. I encountered the image again in the pages of Dennis Brindell Fradin’s book Bound for the North Star: True Stories of Fugitive Slaves.

What initially drew you to the image?
What immediately struck me about the illustration was the tension between how poised, balanced, and graceful the woman looks in contrast to the physical pain and anguish she is enduring from the burden of a metal contraption she is being forced to wear as punishment for running away. The concrete, material presentation of enslavement in the form of this imposing metalwork with eighteen dangling bells is what continues to haunt and speak to me. As a person who attended Catholic school from kindergarten through high school, I saw echoes in the image of religious objects used in mass like long metal contraptions for incense, tall cloth banners, and massive crucifixes surrounding the altar. The perfect symmetry of the three horizontal bars holding the bells and the height of the vertical bar shooting up from the woman’s spine as she labors left me conflicted about what it means to make a subjugated person a spectacle both in their experience and as captured on the page. Furthermore, I keep thinking about how fraught the relationship between silence and sound is in the context of this image. 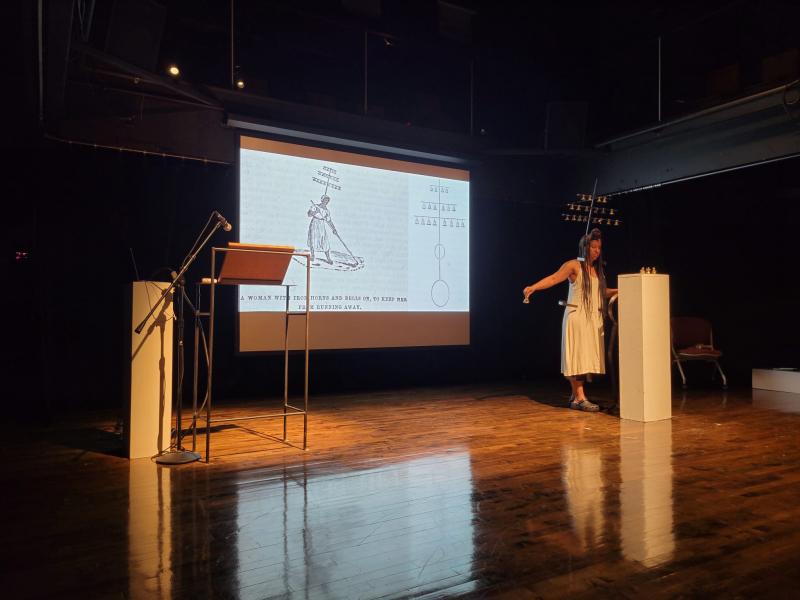 The contraption in the image also reminds me of wearable sculptural art—a medium I have been captivated by as evidenced in my obsession with visual artist Nick Cave’s “Soundsuits”—one of which graces the cover of my debut poetry collection Library of Small Catastrophes. For years, I have been drawn to the art of adornment, costumes, textiles, and beadwork with a particular fascination for garments that have the potential to be activated in a live setting with their ability to make sound. I’ve become enthralled with the woman in the image and see her as an ancestor as well as contemporary collaborator. Without seeking to romanticize her enslavement, I view her as a musician-dancer-performer. The nuance of the image calls attention to her bodily gestures of elegant beauty despite staggering pain—she becomes an impossible possibility. Almost every day I think about the woman in this image and how she must have sounded—the literal and figurative weight of those bells. 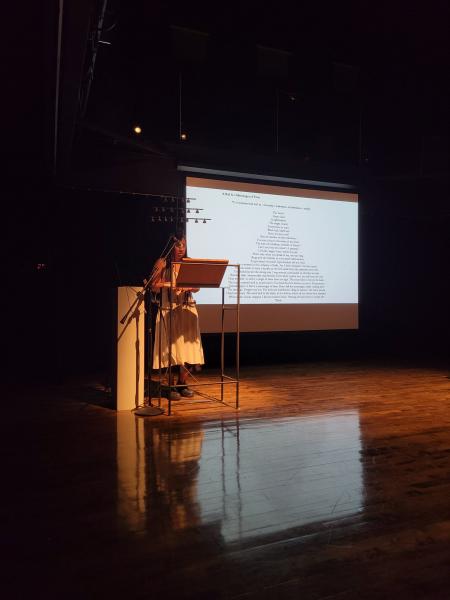 In addition to your poem "A Bell is a Messenger of Time," published in the Fall 2022 issue of MR, you also created a metal sculpture in conversation with the image. What led you to pursue this medium?
In the spring of 2022, I took a graduate course at Brown with Professor Thalia Field where we were tasked with learning two new practices or mediums. I chose performance art and metalwork. I took a weekend fabrication workshop at the Providence Steel Yard to learn the fundamentals of welding and then set out to reconstruct the metal contraption the woman in the archival image is wearing. As a Black, queer, woman I felt out of my element in the physical space of the Steel Yard amongst union laborers, craftsmen, wood workers, etc. I began to find metalwork meditative, and it has greatly expanded my approach to creative writing.

In thinking about the work of Black scholars like Zakiyyah Iman Jackson’s Becoming Human: Matter and Meaning in an Antiblack World, metal has become (for me) a material, and metalwork, a medium, to navigate antiblackness in the context of the United States—a country where Thomas Jefferson, in his Notes on the State of Virginia, deemed eighteenth century Black poet Phillis Wheatley’s work “beneath the dignity of criticism.” In Jefferson’s seminal 1785 text he describes Black people in bestial terms claiming that they are inherently inferior in not only intellect but also imagination. Initially, it might seem odd that such racist historical claims have led me to the use of metalwork in my artistic practice but this shift in process was partly motivated by studying Robert Thomas’s The Art & Craft of the Blacksmith where he posits, “Scientists studying dolphins in Russia have found evidence they use both grammar and syntax—key components in advanced language. Chimpanzees and bonobos in Africa not only use tools but teach tool use to their children. Bower birds decorate their homes. Ants and bees make war. So, what is our claim to a unique legacy? I say metal” (12). As a writer and artist, Thomas’s argument that what uniquely sets human beings apart from other animals is the ability to engage in metalwork has particularly captivated my imaginative use of this medium. 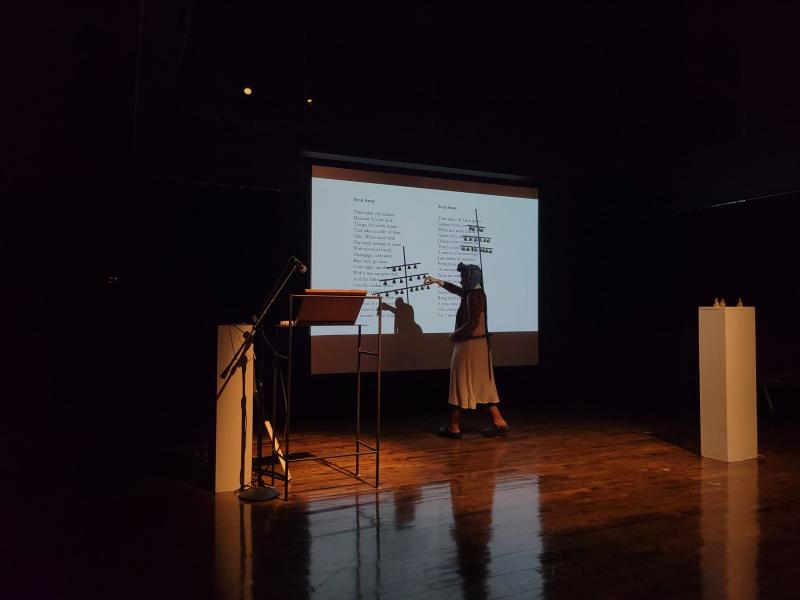 Please tell us about your process for creating the body armor.
I constructed the body armor over a period of two days at the Providence Steel Yard. I first used soapstone chalk to draw out how large I wanted the piece to be and to get a handle on the dimensions for the pieces of steel that I needed. I learned to cut and bend steel as well as how to weld pieces of steel together in order to construct the body armor. I utilized only scraps of steel that I found at the yard and sourced eighteen vintage metal bells for each of the vertical bars. I designed the piece to encircle the neck and waist similar to how it would have been placed onto the woman in the archival image. 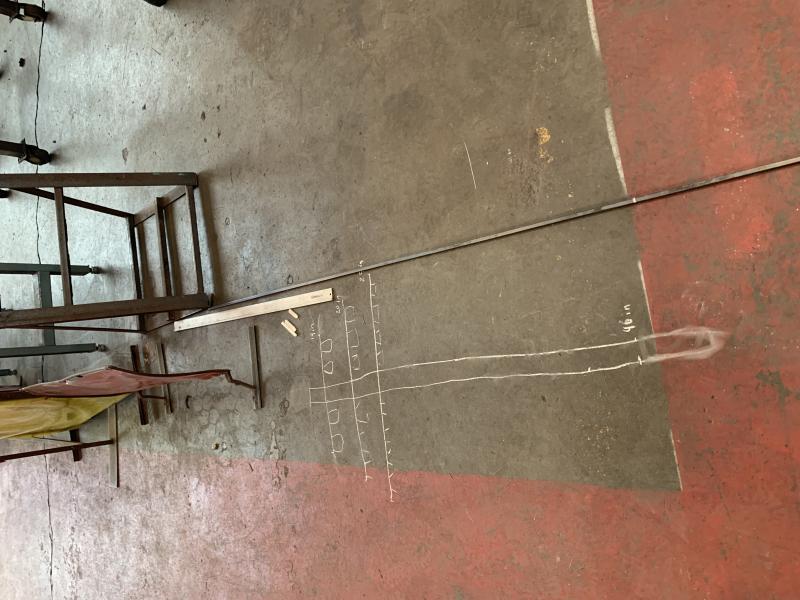 What did you discover in the process of making the body armor?
One of the most pressing discoveries was the potential danger that the body armor carries with it. The edges of the armor are extremely pointy and sharp; I have cut myself multiple times putting the armor on and taking it off. I typically have another person help me to put the armor on which carries a type of collaborative empathy and weight in terms of concern for my physical body and wellbeing. I must also be particularly careful when handling the armor around other people and while transporting it from one space to another. Metalwork has granted me a completely new approach to the process and methodology of “craft” and a different relationship to artmaking. When I hit the return bar on my laptop to create a line break in a poem, I reflect on how much energy and labor it would take to heat steel hot enough for it to bend or the heavy-duty type of machine I would have to use to create a clean cut through solid steel. When I send a poem to the printer and immediately pick it up and throw it in my backpack, I remember how long it takes for a piece of steel to cool after welding before you can handle it without burning your skin. When I jot down poetry lines in the Notes app on my phone, I think about how just entering the steel yard requires me to wear protection for my eyes, ears, hands, and exposed skin. I think about just how much room the body armor takes up, how intrusive it is in my personal living space in contrast to the single sheet of paper its corresponding poem is printed on. 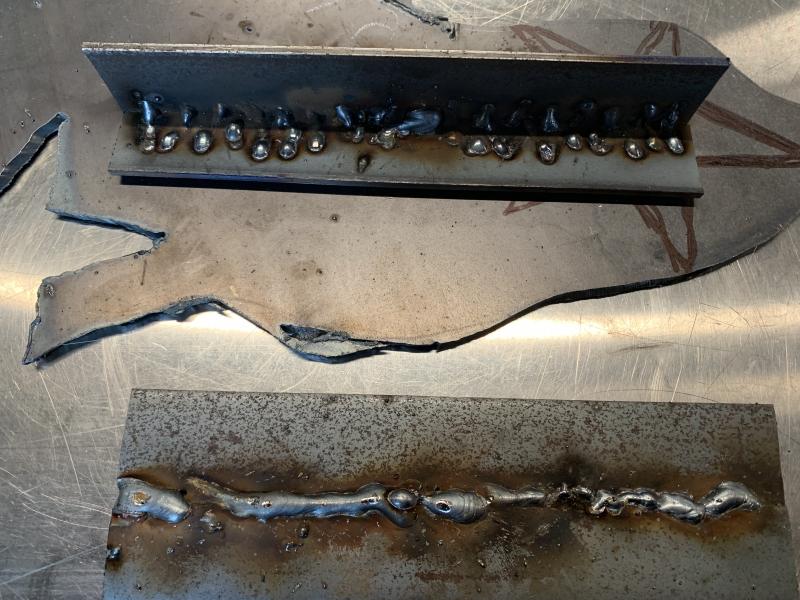 It felt odd to make something that was literally so heavy with such large and sharp dimensions. To make something that has the capacity to puncture my skin and poke my eye, to physically injure me, carried a different tone with it. The fact that I brought something to life from the archive and further animated it on my body, via steel, is still a small miracle to me. I discovered that something different happens when you go to do a live reading-performance with a daunting piece of metal that you are wearing on your body. Audience members lean in, their eyes widen, their mouths open, they respond with more concern and perhaps greater empathy when they visually witness the strain and can see the risk at hand. It has meant something different and unique to me to further embody the words and language of my poetry, to map onto my flesh the subject position of spectacle in a violent yet beautiful way. 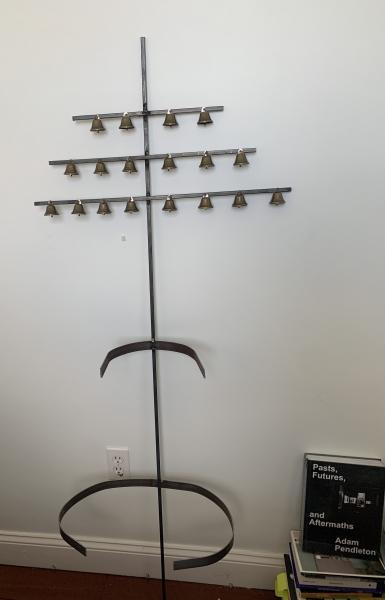 To read "A Bell Is a Messenger of Time" by Alison C. Rollins, click here.

ALISON C. ROLLINS is currently an MFA candidate at Brown University. In 2019, she was named a National Endowment for the Arts Literature fellow. A 2020 Pushcart Prize winner, her debut poetry collection, Library of Small Catastrophes (Copper Canyon Press), was a 2020 Hurston/Wright Foundation Legacy Award nominee.