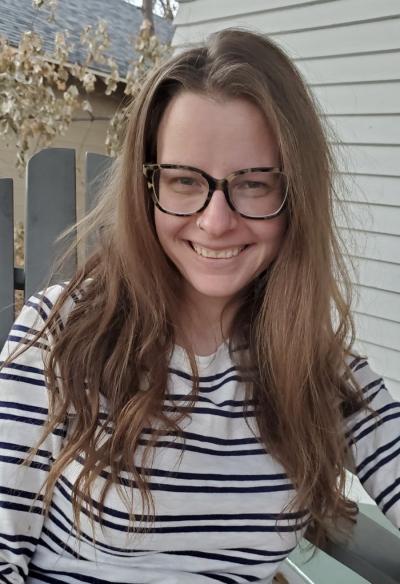 In California, in a dumpster, a rattler lay
half-coiled atop a grease-soaked pizza box,

half-cloaked by yesterday’s news.
It was no friend of mine, the snake, though,

Tell us about one of the first pieces you wrote.
I wrote a pretty epic break-up note to my second-grade boyfriend that, by some twist of fate or good fortune (his or mine?), I never delivered, and so I’ve still got access to high literary phrases like “I know we both tried our hardest to make things work but they just didn’t” and “In my heart there will always be room for you Nick.” But where it really pushes the epistolary form to new heights is right at the end, just before I sign my full name—first, middle, and last. This is where I declare, as only an eight-year-old can, “I guess what I’m trying to say is that you are Terrific!”

What writer(s) or works have influenced the way you write now?
Until about five years ago, I wrote primarily fiction, and my earliest influences are from that genre. Amy Hempel’s “In the Cemetery Where Al Jolson Is Buried” and Lorrie Moore’s “How to Become a Writer” came into my life at a formative time and blew the lid off fiction for me. They changed my understanding of what a story could be, how it could sound, how it could make you feel. Hempel’s and Moore’s stories have been huge for me, along with the stories of Carver, Richard Ford, George Saunders. Other biggies: Hemingway, Tim O’Brien, Cormac McCarthy, and Denis Johnson (both Jesus’ Son and his novels). Oh and Gatsby—I’ve loved Gatsby since the eleventh grade.

Larry Levis was my first, and is my biggest, poetry influence. The music of his long lines, his balancing of the philosophical/metaphysical with the tangible world, his facility with extended metaphor. I learn something new every time I read one of his poems. There are any number of poets—Ada Limon, Hanif Abdurraqib, Ross Gay—I return to again and again, but it’s Levis I hear in my head.

What other professions have you worked in?
My first gig was was watching the neighbor children for three bucks an hour. That started when I was eleven, which seems horrifying now that my own son is ten years old. During my teen and college years, I worked games at an amusement park, sold (and ate) candy and cashews at a place in the mall called RGM’s Nuthouse (really), tried to sell clothes at the Gap, and waited tables. Now I teach creative writing.

What inspired you to write this piece?
An actual snake on a pizza box in a California dumpster!

I sent a picture of it to a friend from Montana—someone more in-the-know with wildlife than I am—and she claimed to be able to tell, from a dozen feet away, that it was a rattlesnake. I never got close enough to confirm or deny.

Is there a city or place, real or imagined, that influences your writing?
I grew up in the suburbs thirty-five minutes south of Pittsburgh, and my parents both grew up about thirty-five minutes south of there, in what, during their heyday, was a lively center of steel production, and during mine, was a depressed river town. These places, along with the actual city of Pittsburgh—during the decline of its industry and in the upswing of more recent decades—animate the vast majority of my work. It’s more obvious in my fiction, but there are definite moments where the influence of these places shines through in my poetry as well. And even when they’re not physically present, they’re always in my mind, a sort of baseline I use for understanding all other settings.

Is there any specific music that aids you through the writing or editing process?
Outside words of any sort—from music, television, people talking—drive me to absolute distraction, whether I’m trying to write or read or even just get my thoughts in some semblance of order.

I used to be able to work with Coltrane or Thelonious Monk in my headphones at a busy city coffee shop, but I’ve grown less nimble with age. A fan is about as noisy as I can stand these days, and I generally prefer to be holed up somewhere like my bedroom or our finished basement. This is why I love writing at night—everyone and their noises are asleep.

Do you have any rituals or traditions that you do in order to write?
These days, no, unless getting away from everyone’s noise counts as a ritual. When I was much younger, though, I had what my husband called my writing scarf, which is exactly what it sounds like—a scarf I wore while writing. I have no idea how it got started, but I’ve got this image of myself illuminated by laptop light, typing away at the pub table in the tiny dining room of our first apartment back in the early aughts, with this skinny nut-brown scarf wrapped around and around my neck. It was supposed to bring me inspiration or get me into writing mode. In any case, the scarf followed us to our next apartment, where we lived while I got my MFA, and then to our first house, where it hung on a closet door, and now to our current house, where it’s probably hiding in an unpacked box. Sadly, I haven’t worn it in years.

Who typically gets the first read of your work?
My husband. We’ve been one another’s first readers since I was a freshman in college. In fact, on our first date, over bad coffee, he crossed out a full one-third of a 30-page story I’d written for my introductory fiction workshop. As a long-time teacher of fiction workshops, I know, among many other things, he saved me a lot of ire from my classmates.

What are you working on currently?
I’ve just started to send out my first poetry manuscript, which focuses on female desire, memory, and belonging. At the same time, I’m getting to work on some new pieces that examine my relationship to Montana and the west and how the process of adoption has impacted, and continues to impact, that relationship.

What are you reading right now?
I’ve been on a bit of an immersion journalism kick lately, thanks to a contemporary CNF course I’m teaching this semester. I really enjoyed The Spirit Catches You and You Fall Down by Anne Fadiman and Random Family by Adrian Nicole LeBlanc. Also Anand Gopal’s No Good Men Among the Living, which I listened to on a road trip and started replaying as soon as I finished it. Next up are Martha Nussbaum’s Anger and Forgiveness and Amanda Moore’s Requeening.

ASHLEY KUNSA’s poetry is forthcoming from Bennington Review, Radar Poetry, Cream City Review, and other publications. Originally from Pittsburgh, she is assistant professor of creative writing at Rocky Mountain College in Billings, MT, where she lives with her husband and two children.