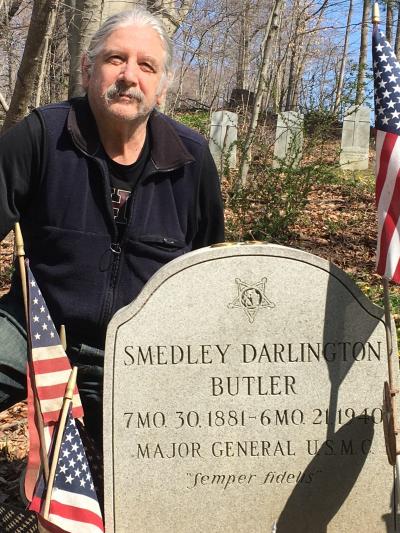 So here I am with Smedley Butler,
Major General, Maverick Marine,
Old Gimlet Eye, the Stormy Petrel,
two-time Medal of Honor winner;
me a sergeant with a Purple Heart
for doing nothing but getting hit.
(Don’t kid yourself, there’s nothing
heroic in that; just bad luck.)

Yet here I am at Butler’s grave. But why?
Well, we were both Marines, there’s that.
And he graduated in 1898 from the school
where I taught decades later for 18 years.
And he wrote a book called War Is a Racket
in which he concluded, “To Hell with War!”
How can you not love the guy for that?

W.D. EHRHART is an American poet, writer, scholar, Vietnam veteran, and active member of Vietnam Veterans Against the War. He was a 1993 Pew Fellow in the Arts, and has been called “the dean of Vietnam war poetry.” His 1989 memoir Passing Time has recently been republished in a revised edition by McFarland Books.