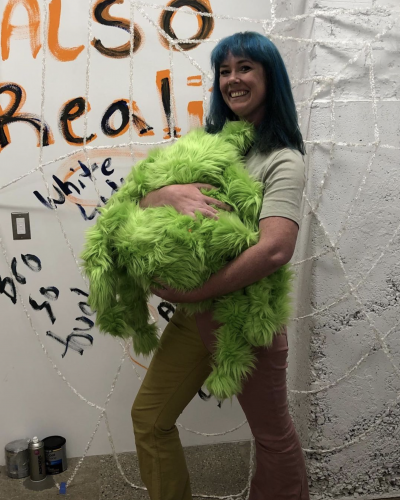 Determinant meaning within the English language exists through the electric glue of our conjunctions. Sticky tiny words like "but" and "also" define the psyche’s trajectory in a story, and stories determine our relationships and behaviors. "And" and "also" are some of the least glamorous of the transitions and are often overlooked for the more forceful usages of the contrast conjunctions and consequence arguments.
—from “Also Reality,” Volume 64, Issue 4 (Winter 2022)

Tell us about one of the first pieces you wrote.
The first piece where I felt like I found my style and message was “I Can Make You Immortal.” I published it with South 85 Journal, and they were generous and kind about a trauma essay that no other journal believed in at the time.

It’s a story about sexual violence and poetry, and finding voice despite the stories drafted for us by others. I’m proud of it. Still.

What writer(s) or works have influenced the way you write now?
I love the solid structure of Melissa Febos, the honesty and humor of Pamela Sneed, the unabridged not-at-all-holding-anything-back brilliance of Dr. Fred Moten, the unyielding hope of Lauren Berlant, the lyricism and cadences of Mary Oliver, and the impeccable research of Dr. Eric Kandel. I love essayists the Brian Doyle, Patrick Madden, and John D’Agata. Those essay bros have been pretty damn supportive (in varied ways) of my work over these tumultuous years. I feel lucky to have anyone believe in me.

What other professions have you worked in?
I’ve worked tons of odd jobs to make it through college from janitor to bowling alley desk attendant. I’ve also taught English in South Korea, Thailand, Brazil, Saudi Arabia, and in NYC, Florida, and Seattle. I taught special education in NYC. I work at Kirkwood Community College in Iowa City. It’s pretty much a dream gig. I love my students and their passion for communication. I’ve been obsessed with words from a young age, and also with art. The humanities always made intuitive sense to me. I do love graphic and UX design, as I see it as a very real extension of essaying. I have to be skeptical while also empathetic when designing products and visuals.

This mirrors a good essay practice.

What did you want to be when you were young?
I ran away to go to art classes when I was seven. I was told to want to be a lawyer due to my combative and dissenting nature, but that never felt authentic. I was ushered into teaching after graduating from BYU. Lawyering was more something the adults around said to placate me: “Kid, you should go be a lawyer. Now, stop arguing.” I have a lot of cousins who are lawyers. My grandfather attended Stanford Law. I just felt in my gut that lawyering would reward the parts of me I did not want enhanced, like binary and black and white thinking processes. I wanted to live within a neon rainbow, within all the uncertainties of reality, as cheesy as that sounds coming from an artist.

What inspired you to write this piece?
I moved to Iowa City from California and before that, Saudi Arabia. It took a month to write this piece in a flurry. I felt manic doing it, but also I found that I had mental space in the Midwest to create in a way I didn’t feel I had when I was hustling in big cities. The breathing and taking a beat was everything. Also, I have to give a shout out to Orion Magazine’s editor-in-chief, who told me to write the piece. The Massachusetts Review gobbled it up before they did, but without that encouragement I would never have gotten this vulnerable. I think it’s important for editors to know that when you engage with artists and authors that we’re often oh so vulnerable, especially when we’re marginalized and speaking truth to power. Being kind to our weirdness is the catalyst for good sometimes. And it doesn't take much. Just a nice note.

That’s all I need, at least, to keep on going with this work I believe in so deeply.

Is there a city or place, real or imagined, that influences your writing?
I am obsessed with Utopias, but only because I have a feeling and theory that they’re overly idealistic bedrocks of violence and exclusion. A new piece I wrote deals with this lack of belonging and what Maya Angelou said about belonging everywhere and nowhere. Thomas Moore coined “Utopia”, which means “no place”. I guess that’s where I belong. No place. And every place.

I would have to say that traveling the world for so long has made me naive and paranoid. I’ve been in Amman during the Palestinian conflict and Saudi Arabia for COVID lockdowns. I live in a trauma fog that includes hypervigilance plus unawareness. I like to put it this way: When you have PTSD, everything feels terrifying. When everything is terrifying, how do you discern what is actually scary?

Often, I just can’t tell until it’s too late and I’m putting out a major fire. That’s what is happening when I get revictimized. I don't believe I have some Fruedian death wish or anything absurd. I don’t think I have a need to reenact my traumas to seek a better ending. LOL. NO.

I just don’t know how to protect myself when I no longer trust my own mind. I read a study that stated that convicted predators could intuitively pick up on anxiety in a sample of children in a classroom, and that these predators could accurately judge who had a psych disorder. They knew more than someone who was not predatory who was suffering. The predators said that they would target those vulnerable students and not the able students. This means the world is substantially more dangerous for those suffering from psychiatric and physical disabilities.

So, I do think the quest of Utopia is often at the expense of the marginalized. It’s a nice and unachievable ideology, sure, but it belongs squarely where it originated—Greek and Roman mythology or, you know, those creeps who ran communities in The Giver.

We need more thinkers ready to grapple with what is and not what could be. I’m tired of this question: “What if?” So what, What if? Anyone can and does dream of WHAT IF? What do we actually do? About the mess we’ve made? That’s a far more interesting and urgent proposition and problem to solve. Like Bertolt Brecht would urge us all to do, Go do something.

Who typically gets the first read of your work?
My partner. He went to Iowa’s Nonfiction program. He’s a wonderful editor who is never afraid to tell me when something isn’t working, and that’s what I love most about him. He’ll also make all the feedback he gives kind somehow, accessible, and warm. I stalked him a bit. And his “Rate My Professor” ratings are perfect. I can see why.

If you could work in another art form what would it be?
I am multidisciplinary. I was in the MFA in Studio at School of the Art Institute of Chicago and am now attending a design program at Maryland Institute College of the Arts. I paint, and my giant neon faux fur spider sculptures are being sold at Buzz Salon in Iowa City. My partner writes ekphrastic essays about building a life around a woman, me, who builds giant faux fur neon spiders for a living.

Giant neon faux fur spiders that she stores under her bed.

I’ve always dreamed of having the patience to take brilliant photos, but waiting for others to live in front of me never jived with my personality.

What are you working on currently?
I want to publish a collection of poems and lyric essays called This Subtweet Is an Act of Love, and I want to turn “Also Reality” into a memoir or collection of braided essays. I’ve just put out a piece called “Missing Woman” about my experience at art school. My face was almost on a giant billboard recently in downtown Chicago, because of art school, which is humorous but in a melancholy way.

What are you reading right now?
I just finished Body Work by Melissa Febos and In Divided Light by my boss at Prairie Lights, Jan Weissmiller. I’m also reading Data Feminism, Cultish, Acceptance, and Cruel Optimism. I’m also going through my family history with my parents, who want to be involved in a memoir I might write, expanding “Also Reality”. My father said: “You being so critical of us made us better people.”

That has to be the best compliment of my life.

MICHELLE RENEE HOPPE is neurodivergent and works as a teacher in Iowa City. Her work can be found in Saw Palm, South 85 Journal, Cleaver, and Litro, among others.