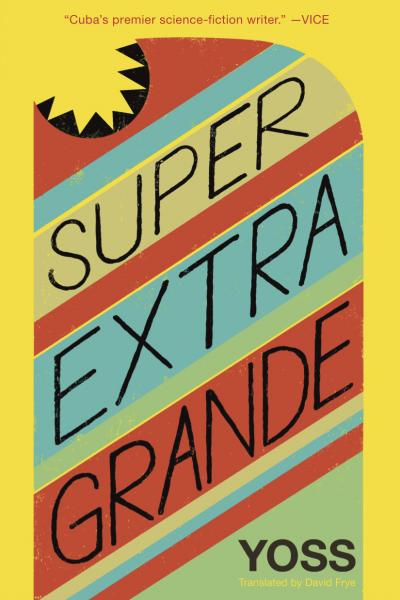 If humanity ever makes contact with extraterrestrials, what language will we use to communicate? Musical tones, as in Close Encounters of the Third Kind?  English, Hindi, Spanish, or Chinese?  If you’ve read the novel Super Extra Grande by Cuban science fiction writer Yoss (the pen name of José Miguel Sánchez Gómez), then you’ll know that it’s none of these. The dominant language of the planet will be Spanglish of course! With apologies to English and Spanish purists, I find Yoss’s vision of a Lati-Anglo future both lovely and plausible. An English translation of Super Extra Grande will be available June 7, 2017 and many more readers can experience Yoss’s compelling vision.

Here’s the setup of the novel. Father Salvador González from the Catholic University of Guayaquil in Ecuador has invented a theorem that enables humanity to travel faster than the speed of light, and the Milky Way has been opened up to humanity. As it turns out, we were not alone, and so we began to form alliances with the six other intelligent species in the galaxy. Along with those intelligent species was a galaxy full of remarkable flora and fauna. Biology gained a host of enormous space animals to satisfy its need for new subjects to study. But what happens when these strange creatures get sick or hurt? Or, as in the case of the novel, when they have ingested something of value?

Enter Jan Amos Sangan Dongo, member of the human colonies in space, and “The Veterinarian to the Giants.” His two last names are a play on words as combining them makes “sangandongo,” meaning “huge” in colloquial Cuban Spanish. On account of spending too much time in low gravity, Sangan Dongo is physically massive. At 7’11”, 375lbs, and with size 50 shoes, the best image to have in your mind is Andre the Giant. Though the biology of novel is rooted in hard science, the story takes most of its inspiration from the grandiose plots of the philosophical picaresques of Swift, Rabelais, and Twain, all of whom are referenced in the novel. As to the personality of Sangan Dongo, whose ego is as big as his bodily frame, Indiana Jones comes to mind.

Super Extra Grande shows the role that Cuba can play in the future, not beaten down but standing ground. As the story of one person’s great skill, the book is a salute to the scientific and medical acumen of the island community. The novel is bookended by two very challenging jobs during which Sangan Dongo has to use all his skills as a scientific adventurer. The first is a very messy trip inside the intestines of a Tsunamis, a giant space worm, to retrieve the wedding bracelet of the wife of a colonial governor. The second is a more complicated job inside a giant amoeba, called a Laketon. If like me, you haven’t thought about micro-cellular organisms since your college Introduction to Biology class, you might want to reacquaint yourself. You remember what a pseudopod is right? Yet amidst all the science and politics, as is the case with all of Yoss’s work, the book is still dedicated to exploring the trials of the heart. Sangan Dongo, while accepting of humans from a variety of ethnic groups, still has his hang-ups about romantic relationships with space aliens. But can any one of us really say we wouldn’t feel the same?

Yoss’s first book translated into English was the brilliant novel A Planet for Rent, which also involved a post-contact world. However, the space aliens in that novel are way more advanced than humans. They are colonial invaders who redesign Earth as a tourist destination. Aliens come to Earth to be entertained by the “natives,” many going further and downloading their minds into human bodies, so that they can experience the world from the inside as it were. The novel is a dramatic and deep commentary on modern colonial tourism—and a proper corrective for anyone tempted by the bandwagon of immediately celebrating better ties between the United States and Cuba. Throughout the novel, the island of Cuba is correlated with Earth, our little island in the universe. And the novel is filled with migrants or would-be-migrants who are desperately trying to get off economically depressed Earth/Cuba. Yoss spreads the blame, and the Cuban government, the United Nations, and the United States, are all called out in their involvement with orchestrating injustice in Cuba.  I suggest also reading this longer novel if you want to really get a sense of Yoss’s range.

The adept translator for both A Planet for Rent and for Super Extra Grande was David Frye.  One interesting move made by Frye in Super Extra Grande was to include short sections of dialogue in Spanglish. In the original Spanish, the dialogue is described as being in Spanglish. Frye takes a further step and translates the Spanish dialogue not into English but into Spanglish. And a somewhat riskier move is that some of the dialogue is in the “broken” Spanglish of one of the space aliens. The result is quite fascinating and is certainly in line with a growing acceptance of Spanglish as a vibrant and autonomous language. FYI: non-Spanish readers shouldn’t have much problem getting through the short sections of Spanglish. Plus, we all need to start practicing for a future world in which Spanglish is the lingua franca!

I’ll close by noting that English translations of Latin American or Caribbean science fiction are regrettably scarce and so the appearance of Super Extra Grande is especially welcomed.  If you’re interested in finding more Latin American science fiction, I recommend starting with Andrea L. Bell and Yolanda Molina-Gavilán’s Cosmos Latinos: An Anthology of Science Fiction from Latin America and Spain. From there you might want to pick up one of these novels: Adolfo Bioy Casares’s The Invention of Morel, Angelica Gorodischer’s Trafalgar, or the more popular Laura Esquivel’s The Law of Love. And never fear: Restless Books is on the job with their Cuban science fiction series, giving attention not only to Yoss but also to the excellent work of premier Cuban science fiction writer Agustín De Rojas.

I’d rather not think of this trend of translating Latin American science fiction as a New Boom. I would rather give it the name of one of the alien ships from Super Extra Grande: “The Imperturbable Eviscerator of Unredeemed Suns.” Catchier, right? Whatever we call it, it’s absolutely Sangandongo.

Matthew David Goodwin is an Assistant Professor in the Department of English at the University of Puerto Rico and is the editor of Latino/a Rising: An Anthology of Latino/a Science Fiction and Fantasy (Wings Press, 2017).