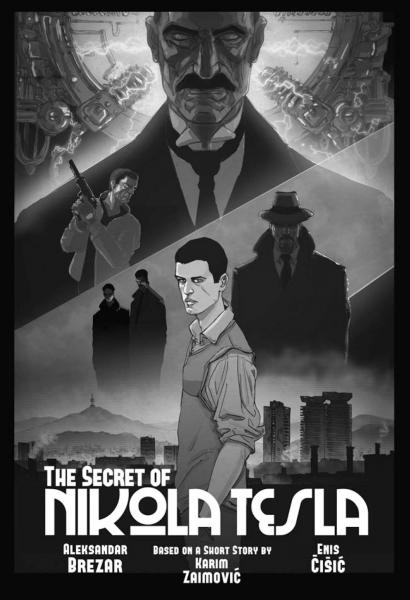 Aleksandar Brezar: Well, it’s not a story that can be summarized. The simplest way to describe his life and his work would be to say that he was a journalist and a writer from Sarajevo who, during the war and the siege, had a radio show where he read his stories on air—short stories that were a way of escaping the reality of the war, and that  in some way provided at least a little bit of comfort for those who were listening. And that was basically his life’s work, until his life was cut short. At the very end of the war, at the very end of the siege, at the age of twenty-four. Everything else, I’m not sure we’re in a position to talk about it.

AB: We didn’t get a chance to know him. Both of us were too young.

Enis Čišić: I lived in the same place at the same time, and, as Aleksandar said, recording those shows, reading the stories, that was his way of escaping that reality. I would just say that my escape, in that time, was reading comic books, and fantasizing about making comic books when I grew up. And I never met Karim, but I knew that he wrote some essays about comics, and he wrote some tutorials for a local magazine, about how to make comic books.

EČ: Well, he had an artist from Sarajevo who did the drawings, but he wrote the tutorial. So I read his tutorial, and I didn’t even know it was Karim. So later on, when I read his stories, and then Aleksandar contacted me to suggest that we could do one of his stories, it was important to me—because of that background, and some of my own experience in the period of the war, when I really wanted to write comic books.

JH: So, even though you never met, he was one of your teachers?

EČ: He was one part of my mind. 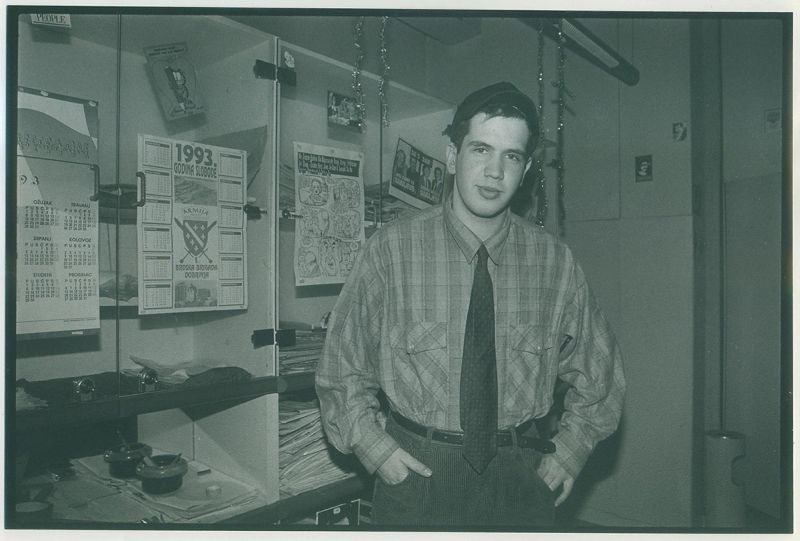 AB: As for me, I only read Karim’s stories after the war, since I wasn’t here during the war.  And they helped to get to the “why?” Since before you get to the why, you have to go through, past the how and the where and the when. And the who.

I think that his stories—in addition to other authors, such as Dario Džamonja, who I always mention, Ozren Kebo, who wrote that great Sarajevo for Beginners, Miljenko Jergović, who wrote Sarajevo Marlboro—those were the authors who helped me get to “why.”

JH: So the Zaimović collection of short stories, The Secret of Raspberry Jam, was published only after the war, I imagine.

JH: And all those stories started as radio stories?

AB: Yes, although some of them were unfinished.

EČ: Yes, as I remember, I think they had to edit some of the writing, because some of the stories weren’t finished.

JH: Well, if it was to be read on the radio, some were perhaps more outlines or notes, so that he could improvise from a written structure as he was broadcasting.

AB: The great shame is that they’ve lost the tapes. All of those shows were taped. Apparently all of the tapes have been lost. I’ve been talking with Lajla, his sister, about possibly trying to retrieve something. Just a couple of weeks ago, she told me that she might have found something . . .  And for those of us who weren’t here then, I think it would be really interesting for us to hear him read them. To see how different they would be.

JH: You’d think the CIA must have it on tape some place. . .  Tell me a bit about the reception of these stories. Obviously they were popular after the war, and they’re still important here in Sarajevo today?

AB: There’s an entire generation of people. . .  Those who worked with Karim and those who knew Karim definitely consider them to be a cultural treasure. I think their meaning varies from generation to generation; for us, it must symbolize something different.

JH: And this is part of a larger project, right? This story, done by Enis and you, but you’re also thinking of having other artists. . .

AB: Yes, it is. There’s already another story called “The Invisible Man from Sarajevo,” drawn by Boris Stapić, that came out in Asymptote. Originally the plan was just to do this one.  Well, there was no plan, actually. You talked me into it. You said, “Maybe you should try and do this. . .”

JH: Yes, okay, we editors have lots of crazy ideas, and we pitch them all the time. But very few of them actually happen, because writers and artists have their own projects. And even when you solicit work, it’s not promised that you’re going to like what happens. So, from throwing out ideas to seeing something actually come into the world, there are a lot of steps in the way. And in fact it almost never works.

AB: In this case, one thing led to another, and I ended up having three different publishers, from three different countries (that used to be one country). There's a great publisher in Zagreb, Croatia that has previously published Zaimović's short story collection, which is a nice coincidence. There’s a really good publisher in Belgrade too, and we also have a publisher in Sarajevo. And there’s a third artist as well. . . but don’t ask me how that’s going to play out.

AB: Actually, I think there is a comic that was written and drawn during the war by Dragan Rokvić. But I’ve never seen it.

JH: Well, I like the idea of having multiple artists do the collection of short stories; it’s like Borges’s garden of forking paths. There’s the horror of having someone’s life cut off, when they had an entire future of creative work in front of them. You don’t know where it was going to go. You have no idea what his work would have been. So why not go in every direction at once? To show at least some of the possibilities.

AB: What could have been.

JH: What could have been, or at least. . . of course, the possibilities are infinite, but you can give some sense of the richness. There’s even a technical term in for this in narratology, the disnarrated. All the roads that weren’t taken. “If he had turned left that day, like everybody else, instead of turning right, then he would have ended up at the concentration camp too.” I once heard the professor who invented this term say that, for him, the amount of disnarrated in a story is roughly equal to its richness. So the more paths that it suggests. . .

AB: You know, I was talking to Miljenko Jergović about this—he and Karim were friends—and last night he showed me this great photograph by Strašni [Milomir Kovačević]. The two of them were standing in the middle of a pile of junk during the war. Really an amazing photograph. And we were talking about what we were doing with the comic, and how people who were close to Karim might seen it, and he said, “Well, you have this great advantage of being able to do this without being distracted by knowing too much.”