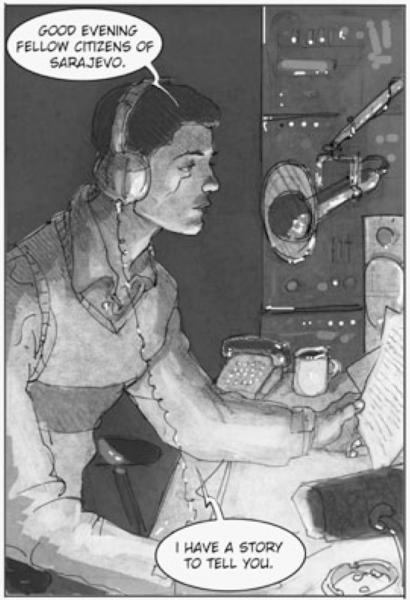 Between Realism and Fantasy

JH: The next obvious subject is to talk about process, and how this comic came about. From an idea to an object that exists in the world, there’s a hell of a lot of work. So tell us about that. One of the things people who don’t know much about it don’t know is just how much work it is to make comics.

EČ: It took us what, six months?

AB: No, more than six months. Between nine months and a year.

EČ: A long, long process. I read that particular story before Aleksandar contacted me, and I was already thinking about how that story could be translated into a comic. At the time, I was reading a lot of foreign comic books to get ideas and stories, but I’d never taken anything from my own place, my town, or from the time when I was a kid. So I really pleased that Karim wrote “Tesla,” which for me was such an amazing story. I remembered the mood and how the city looked during that period, and I was imagining some of the movies from when I was thirteen or fourteen, some science-fiction, fantasy, or thriller movies, placed in Sarajevo. And when I read that story, I saw that had almost everything I wanted to do. So when Aleksandar contacted me I was really enthusiastic about doing it. But we knew it would be a long process.

JH: So even though Aleksandar picked the story, you had already been hoping that it would be that one?

EČ: I didn’t think about it in advance, but when he contacted me, and he mentioned that story, it really made sense. I’d read all the other stories, but that one, for me, it was right for drawing.

JH: Tell me more, though, about your actual process. Many of the people who are interested in our magazine are writers and artists too, so questions about process are important.

You have the story. Then what do you do?

AB: Well, I wasn’t trained in writing for graphic novels. Or in writing generally.

JH: Did you have to learn from Enis about what he needed from you?

AB: What I really did was find everything that was ever written about writing for graphic novels, and then I read all of that. Then I said, “Okay, this makes sense. . . or this is pertinent.” I mean, I did know a bit about film, and how to write for film. And that helped.

JH: I don’t know if this is a good analogy, but I use it anyway. I think about storyboarding for movies and how scenes are constructed for films.

EČ: It’s the same. It’s the same. In the process of doing it, I think that we both learned about our process from each other. You, Saša, were reading about graphic novels and writing and scripting. And I had some experience in making comics, so I’d suggest some ideas about how the scenes might look. As if we were doing a movie, as you said. Storyboarding the panels, and placing the camera in the scene, and putting characters in the scene, etc. For me it was really a pleasure, that early stage of pre-production. . .

AB: As I said, by knowing a little bit about film, you understand the dynamics, and that time in film is linear. When you reading a comic, time is relative. So you have to understand the differences between cuts in film, and editing in film or TV, or what have you. Well, comics is a form of editing as well. It takes people about ninety seconds to read a page of a comic book. When you know that, you can play with the speed of events, and make things last longer, how characters appear briefly, or take a little bit more time. Time is key here.

EČ: Yes, yes. That’s it: the difference between comic books and a movie is that you look at every panel, every shot, on the page. You can see it. When you open a page, you see every shot on the page. It’s important for the artists to guide the dynamic of the reading; you have to guide the audience to look at the right images. And there are rules how to do it. That’s the only difference, I think, from movies.

In our process, we tended to talk mainly about the dynamism of the story. Because with this story, I had to put some action, some more dynamic images. And we also talked about the mood, about how the city looked in that period, the architecture of the town, and other story elements. That’s something that Karim didn’t have written down.

JH: There are a lot of wonderful things in this adaptation, but especially its sense of place. You have a series of establishing shots where reader responds, “A-ha! That’s where we are. And that’s what it’s like.”

EČ: It’s filling in something that’s not written. Information for people who don’t know what Sarajevo looks like, or who weren’t in Sarajevo during that period. It was important to have that.

JH: In this medium, it may be one thing that you can achieve more directly and more powerfully than elsewhere. In any narrative, the reader should have an active imagination; you have to create the story in your mind. But in this case, it’s there. You see it.

AB: And there’s also the issue of words. Because comics aren’t just images. That was a particular challenge. There’s a limit to the number of words you can put on a page.

AB: We wanted to stick to Karim’s words, because it is his story. . .

JH: So you had to cut it down to a skeleton form, one that would still work as a story.

AB: I think it’s twenty-five words per panel. I think that’s about the maximum number of words you can have in a single panel. And then for the whole page, I think it’s maybe two hundred and fifty words. Which is really not a lot.

Working on that, and trying to maintain first his voice, as well as a sense of reality, well, that was difficult. Plus, we had to do it in translation.

JH: To do it in translation and to do it in genre, right? Because another part of your success what is getting the tone of a detective novel, or a thriller. It has a certain language, a certain rhythm, a certain feel. This could be a Hitchcock movie or a Dashiell Hammett story, something like that.

EČ: That was our reference. Film noir, we thought, was the best way to get this across.

JH: That reminds me. There’s another technique you use. A lot of fun, but it’s also very effective. You make allusions—probably some I didn’t catch, but some I did—to other movies, to other scenes. For example, in one scene there’s what looks like a shot from Dr. Strangelove.

AB: Yes, that was what we wanted. I think it was in the script. I think I mentioned it.

EČ: There’s also a shot from The Third Man.

We did use a lot of references of the sort you mention. We did a mapping of the film noir style and then just mixed them together.

JH: So why do that? What does it accomplish? As an artist, do you always do this? Is it part of your technique, or is it something specific to this story?

EČ: Actually, for this story, I was thinking about it. I don’t have any photos from the period during the war. But I did a lot of research to find different kinds of photographs, not just photographs from the famous photographers, or from newspapers. I have some friends who gave me their private photographs of the town during the siege.

And it’s not something I use all the time in my process, but I like to look at movies, to use references, because of the photography and how the shadow and light works in some scenes. So that’s why for this project I thought certain scenes would be good to have. It’s also part of the pop culture and Hollywood we grew up around, watching those movies. So I almost had to have that kind of structure in my artwork.

JH: But it’s also interesting. . . At some level, those are two really different ideas, right? One is photographic realism and the other is pop culture fantasy.

AB: Well, Karim was also referencing a lot of stuff in his work, so a lot of it does point to him. Not just us. And also it really does help the readers get a better sense of what’s going on, whenever they can recognize a reference. “Huh? This is a panel from Dr. Strangelove. Oh, well then, I see where this is going.” It helps the reader.

With Karim, though, I don’t think his focus was on the war, not all that much.

JH: Yes, that’s what you said at the beginning. On some level, telling the stories was a way to be outside the war.

AB: So we use the war as a set-up. To set the story up for the reader, not to be explicit about what was happening. We also want the readers to do some of the work on that.

JH: But on another level, that’s also a reality of the war. We’re talking about the siege in Sarajevo, where one of the activities of many of the people in the city in that time was to insist on creating culture and to continue the life of civilized people. Despite the barbarism, that history bestowed on them.

EČ: That was another thing: when the characters are talking about Tesla, we didn’t want to have Karim just sitting, visually, typing. We wanted to show some of the things that people were doing in that period, like carrying water, chopping wood, running from snipers, etc. It’s not something that you have in that story, in the book, but we wanted to show. . .

AB: The environment in which he lived, and how difficult it was then to do creative work.