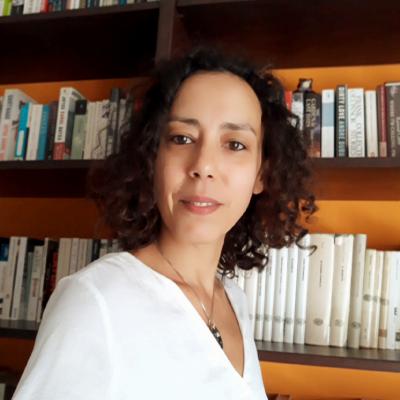 They told Mr. Ignazio Coppola to sit here and be a good boy now, and wait. And Mr. Ignazio sits waiting sedately as he was told to, his back straight and his hands spread on his knees. Every now and then he looks at the wall clock: it’s almost four o’clock, Arturo and little Camilla will be there at any moment.

Tell us about one of the first pieces you wrote.
One of the first pieces I wrote was a small collection of short stories for kids that I wrote for my nephew. It was in 1996. I thought it would have been fun to play with him by reading out loud short pieces that had his toys as main characters. And yes, it was fun. Now that he is a young student of Cinema at the Naples Academy of Fine Arts, we laugh a lot about our first creative experiments.

What writer(s) or works have influenced the way you write now?
This is a difficult question, because I think it’s up to the reader to say “oh, look, in your writing I can read a bit of this or that writer”.  When we write, in a more deep and indirect level we also tell our readers what we have read. Amongst my readings I can name Dostoevsky (my first passion when I was still a child), Chekov, Tolstoy, Kafka, Faulkner, Tobias Wolff, Dubus (both father and son), Richard Yeats, Joyce Carol Oates, James Joyce (the subject of my BA dissertation) and many others.

Speaking of contemporary Italian writers, at the moment I’m trying to learn as much as I can from the works of Helena Janeczek and Andrea Tarabbia.

What other professions have you worked in?
I left my parents’ house at a very early age and I did different jobs to earn a living. Even though writing and reading have always been a daily activity, writing is something that couldn’t give me the financial stability I needed at that time. In Italy I worked both as professional posing model and in the recruiting and headhunting business.  When I was living in London, I was the Deputy Manager of a small independent bookshop chain, and I really loved it.

What did you want to be when you were young?
I wanted to be a judge to help kids who were living in problematic families to find good and caring new families. However, during my first year as a law student I realized that law as a subject wasn’t my passion at all, so I dropped it and moved on to something else.

What inspired you to write this piece?
If I Don’t Come Back, Don’t Look for Me deals with my origins, which are in Eritrea: both my grandfathers (the father of my mother and my father’s father) were Italian’s soldiers who had a relationship with my African’s grandmothers. I was born and raised in Italy, were my parents emigrated to in the ‘70s, but when I was a child many elderly people used to look at me and say: “oh, you are from Abyssinia, aren’t’ you?” and I hated to hear that, because I’ve always known what “Abyssinia” meant in history: it meant the horrors of the fascist regime.

This short story belongs to a collection of short stories set in the suburban area of Milan called Gratosoglio. It is a place I know very well because I did live there for some years when I was child and it had quite an impact on me. Until the ‘90s Gratosoglio was considered one of the most dangerous and poor areas of Milan, and it was true. Nevertheless, there was solidarity amongst those who did not belong to the criminal side if it. I remember parties on the street and caring attentions to each other, especially amongst single mothers. It took me many years far away from Gratosoglio to write and even to talk about that period of my life. I guess there’s always a time in life when a person feels the need to look back.

Is there a city or place, real or imagined, that influences your writing?
In general, when I write I always try to think to a place I know for real, otherwise I collect pictures from web and books and make my own maps of the places I imagine. This is what I did, for example, to write my first novel (Il disordine non va in scena, Bookabook 2017) set in Milan on December 12, 1969, the day of the Piazza Fontana bombing. I created on paper a very big map of the city, with shops and transport and theaters as they were at that time.

Is there any specific music that aids you through the writing or editing process?
I write in complete silence, at least the first drafts. When the story is fully on the page and I feel confident enough, I usually edit the piece listening to classical music, which helps me to relax and at the same time helps to set the rhythm without the distractions of others’ words in my ears

Do you have any rituals or traditions that you do in order to write?
Yes, I do have rituals, and I get really nervous when my schedule is interrupted by things that have nothing to do with my work. I write – or research for the piece I want to write -  from 9am to 12:30pm, Monday to Thursday.  After a very light lunch, I read fiction and I keep myself updated on what is going on in the literary world (essays, interviews, etc.). The first draft is always written on paper and with a mechanical pencil, and I have been using the same pencil for the last ten years.

What are you working on currently?
I’m working on a novel set in the ‘90s, between Salento (a geographic region in Puglia, which is in southern Italy) and the Balkans.

MIRFET PICCOLO graduated from Birkbeck, University of London. There, she completed her first collection of stories, The Last Men on Earth (unpublished in English). After re­turning to Italy she wrote a second collection (in Italian), Se non torno non mi cercare (If I Don’t Come Back, Don’t Look for Me), earning a commendation at the Premio Italo Calvino XXIV edition. Her stories have been pub­lished on Nazione Indiana. Il disordine non va in scena is her first novel.