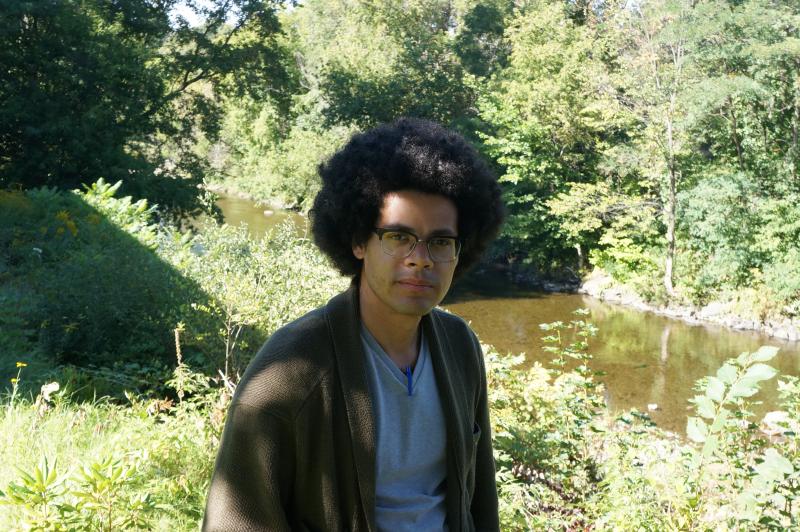 It took time and travel to understand
how the word father sings to me in all
languages — I want daddy, but father-abuser crosses
the notes or keys I believe have barricaded
the badness of that man. I hear father-addict
in the damn silence. Of course, my whol-

hearted hope had no chance, which I should
have known once I learned guitar — the first instrument . . .

—from "The Fidelity of Music," published in Winter 2016: Words and Music

I’ve thought often about the very first conscious piece I ever wrote—which is to say, the one that turned me into someone who regularly contemplated (and acted) on the need to write. While hanging out in my bedroom, for no particular reason, my best writer friend asked me why I didn’t write and, when I didn’t have a good answer, he gave me pen and paper. We sat in silence for maybe half an hour and then shared what each had written. More than the piece itself (a rhymed, melodramatic scene in which I imagined witnessing my own funeral), more than the rare stillness, it was his mentoring reaction to that piece, his startling affirmation and connection to what I’d written, that sparked a faith in contact through poetry—it was the genesis of a possibility that I continue to explore and question today.

I worked on my MFA in tandem with my PhD. As a result, I studied the theories of figures like Ferdinand de Saussure, Jacques Lacan, Theodor W. Adorno, and Michel Foucault alongside the poetics of figures like Shakespeare, William Carlos Williams, Elizabeth Bishop, and Gwendolyn Brooks. This juxtaposition deeply influenced how I prefer to approach writing and revision, by inviting me to consider and cultivate (rather than divide or delimit) the intersections and synergies between critical and creative processes. And I admire those writers who have crafted idioms that blur and blend those distinctions: Virginia Woolf, Gertrude Stein, Amiri Baraka, Charles Bernstein, Claudia Rankine, etc. Although there’s been an unfortunate (ethos-driven) history of division between academics and creative writers, for me theory and poetry place very similar bets on language’s relationship to the making and the breaking of meaning. Both genres have purchase on the importance of cultural intervention; both have deep investments in writing as if thinking around the next corner of humanity.

I grew up working class and started young—between that and moving around a bunch, I’ve worked a lot of different jobs. By the end of college, I’d done some roofing (my father’s trade for decades), nighttime janitorial, waited tables, been a dishwasher and a prep-cook, and worked in a movie theatre,worked in the writing center, painted houses, and did some labor work for a construction plumbing company.

What did you want to be when you were young?

At Oregon State University, before majoring in English, I was a double major in Zoology and Photography. I grew up loving the outdoors (fishing, camping, hiking, etc.), so the idea was to use those two degrees to become a wildlife journalist and, if possible, to study wolves. Having grown up around a constant anxiety about (not) having enough money, I really wanted a profession that could, at the very least, reimagine what it would feel like to be “on the clock.” And my furthest image from the office was the wilderness, so I welcomed the prospect of spending several weeks or months out in nature, studying and documenting animals in their environments. But then I ran into Organic Chemistry, which closed some doors for me in that field.

I’ve been increasingly aware of how little I sing to my son. I’ve never been a good or comfortable singer, but when he was first born, I sang often (always “You Are My Sunshine”) to comfort him (and myself some) when he cried—which really surprised me, as I’m sure it did my partner, who had rarely heard me sing. But he’s five now, and that singing has all but stopped. This piece began by wondering what that might be about.

A few months ago, I completed a residency at the Vermont Studio Center. In addition to writing new poems—“The Fidelity of Music” was written there—I was working on a lyric essay about how rivers have served as counter-hearths to an otherwise dysfunctional sense of home. While I have written poems about rivers and about fishing before, I never write while actually on the banks of a river—I’m always there for my other religion: fishing. The VSC writing studios, however, overlook the Gihon River, so I spent those four weeks writing precisely on the banks of a river, and the experience instigated deeper realizations and explorations about the powerful influence that rivers have had on me: as literal spaces of recreation; as figurative spaces of contemplation; as unique ecosystems with a diversity of wildlife; as complex forces that flux with history and contingency; etc.

Typically, my partner gets the first read of my work. But, every now and again, I get this abiding sense that I’m writing a piece with a particular somebody in mind. In those cases, if I can figure out who s/he is (and if s/he is a writer), I’ll send that work to who I suspect is its most important reader.

Song. And there are times when I also consider getting my old Nikon camera down off the shelf and taking another swipe at photography.

What are you working on currently?

I’m working on my second full-length collection of poems. While at VSC, I also started a book of verse essays that meditate on my various experiences as an angler.

One perk of teaching such talented creative writing students at the University of Arkansas is that I get the opportunity to populate workshop syllabi with newer collections that I’m excited to engage and collections to which I want to return and spend more quality time with. This semester, those include Natalie Diaz’s When My Brother Was an Aztec, Ross Gay’s Catalog of Unabashed Gratitude, Ada Límon’s Bright Dead Things, Solmaz Sharif’s Look, Lyrae Van Clief-Stefanon’s Open Interval, and Ocean Vuong’s Night Sky with Exit Wounds.

Geffrey Davis is the author of Revising the Storm (BOA Editions 2014), winner of the A. Poulin, Jr. Poetry Prize and a Hurston/Wright Legacy Award Finalist. Davis also co-authored, with poet F. Douglas Brown, the chapbook Begotten (Upper Rubber Boot Books 2016). His honors include fellowships from the Cave Canem Foundation and the Vermont Studio Center, the Anne Halley Poetry Prize, the Dogwood Prize in Poetry, the Wabash Prize for Poetry, the Leonard Steinberg Memorial/Academy of American Poets Prize, and nominations for the Pushcart Prize. His poems are forthcoming or have been published by ​the Academy of American Poets, Crazyhorse, The Greensboro Review, Hayden's Ferry Review, The Massachusetts Review, Mississippi Review, New South, ​The New York Times Magazine, Nimrod, and Ploughshares, among other places. Davis grew up in Tacoma—though he was raised by much more of the Pacific Northwest—and teaches in the MFA Program at the University of Arkansas.