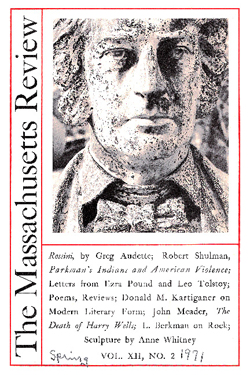 In Review: On Dramatic Character

The Death of Henry Wells

Letter to Be Disguised as a Gas Bill

Count Leo Tolstoy and Violence in the Philippines

Tragi-Comedy: A Study in Rossini

The Last Day of October

Where Have All the Nuns Gone? ; Orgasm

A New Letter by Ezra Pound about T.S. Eliot

After the Game is Over; Seven Ways of Accounting

Process and Product: A Study of Modern Literary Form

A Young White Man Steps Out of His Shower

Instructions From the Dean of Menopause

In Review: The Greening of America

In Review: Dissent in Russia

In Review: Dada and Surrealist Poetry

In Review: Four Books on Rock

In Review: Principles and Persons

The Death of Harry Wells, Fiction by John Meander

The Parade, Poetry by Burton Welcher

Letter to Be Disguised as a Gas Bill, Poetry by Marge Piercy

A Young White Man Steps Out of His Shower, Poetry by John Taggart

In Review: Dissent in Russia, Non-Fiction by Laszlo Tikos