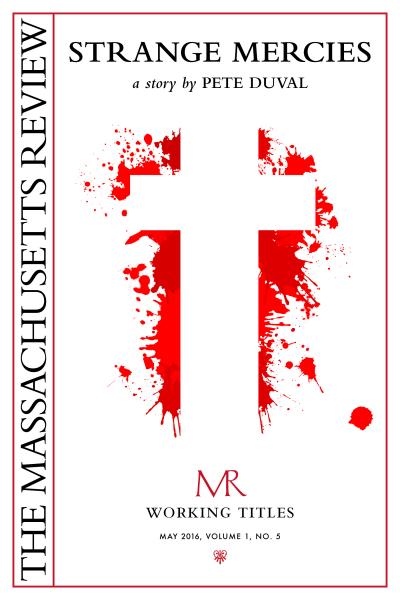 THE MORE MAYHEW pretended to pray, the more he began to doubt the project of documentation, and yet the spectacle of what he’d already videotaped seemed fully real only now, the images wavering with unstable pixilation in the low light of his room. In one clip, the blood runs in streaks that snake from triangular wounds at the woman’s palms upward along her wrists and forearms, as though she has held her hands slightly raised and out to the sides long enough for it to dry. Mayhew’s neck ached as he sucked the last lozenge of ice from his rum and Coke and wiped his forehead with a paper napkin from breakfast. It was night again. He’d lost track of the time. There was no time. He slowed the progression of images to a crawl so he could nudge up to a clear shot of the dark ragged punctures. The woman is eighteen or so, more girl than woman, beautiful to Mayhew in the way all young people were, even more so. She’s thin, almost spindly, but with rich folds in her neck that glisten dark gold and deepen when she turns her head to scan the crowd, or looks up into the sky, or meets the gaze of the camera. Even now, it was hard for Mayhew to look at her eyes.

In another clip, rain pocks the buckled concrete just as she’s concluding another of her unintelligible—what?—sermons, he guessed. He had so little Spanish. For five minutes she has watched Mayhew, with squinting suspicion and maybe a little superiority and certainly a degree of pity as he crouched in the street, duck-walked closer, angled to the left or right, dipped low, then held the camera above the heads of the onlookers. At the time, he wasn’t paying full attention to the content of the shot, just that it was well framed and in focus, the sweat streaming from his temples into his beard, then leaking from his chin.

Now she stands on a splintered wooden spool tipped on its side.

Now she’s talking to the crowd of mostly old women, some apparently blind, their eyes wandering, and to legless men in grimed soccer jerseys on the curb, their skin like jerky, the tattered hems of their pants folded back under their knees, and to ambulatory cripples, street people resting puckered stumps on the crossbars of their crutches.

Now a woman in her eighties turns half smiling to the camera and lifts her dress to reveal the archipelago of running sores that trace the ridgeline of her shins. In that moment, weeks before, Mayhew hadn’t had time to take it all in. It was almost too horrible to watch, like some medieval pageant of horrors, but he watched again and again, for hours. Mostly, though, he watched because she is fascinating. The alarming nonchalance of her gesticulation is fascinating. She’s in control, but more than this. She radiates. In her Jordache jeans and home-sewn camiseta, the white earbud wires of an MP3 player draped over her shoulder, she seems outside time looking in. This is serenity. The more he looked, the more radiant she became. He found it difficult to put a label to what he felt—other than shame, because he wondered whether such thinking might be the ghost of colonialism talking shit in his head.

He’d shot the woman over a number of days, while the network correspondent, Bob Yoshida, whose Spanish was also practically nonexistent, shouted questions and the locals all around them curled their lips in disgust. She was not one to give interviews. In one—just one—clip does fresh blood well up from the wounds unmistakably and in real time, twenty-one seconds’ worth; it drips to the street with each gesture of her arms—some of it splattering people as they beam into this chance benediction. (Washed in the blood, he’d thought, with a wince. There’d been dried blood that night on the barrel of Mayhew’s lens.) Now she’s shifting painfully from one foot to the other, two red-brown stains where the blood has surfaced through the bandages.

But not long after Mayhew shot the footage, she had disappeared. It all seemed to happen at once, a rushing confluence of events. There was an e-mail from the network calling them back to Chicago, which Mayhew had refused to obey. Soon the network’s e-mails stopped, and in the weeks since, he had not left the walled city’s square mile, its morning smells of shoe polish and fresh-squeezed lime. He was a little unclear about the terms of his visa. He convinced himself not to worry. He was talented that way. He would find her. She was here, somewhere. He needed more footage. He thought he had time enough, and with one exception, everything he needed in his small room on one of the narrower streets near the cathedral. The air conditioning was weak and intermittent, but Bob had left behind two and a half cases of bottled water. The man had been scrupulous about not drinking from the tap. “Hydrate!” he would yell whenever he saw Mayhew break a sweat. Then his voice would soften into ironic fecklessness: “But don’t drink the water.” Considering it a cliché, Mayhew had not heeded that warning. He’d rinsed his toothbrush at the sink, and then spent a week and a half navigating, like a cripple himself, a new universe of bacterial consequences. “Baptism by fire,” he’d yelled from the toilet. There was also the beer, Águila, not great but entirely serviceable. And, of course, Mayhew’s supply of rum, the good stuff, Ron Medellín. He and Bob had split the cost of a case, even though Bob himself, knightly Bob, rarely drank. (It had taken Mayhew all of one day, but he’d learned to operate the goddamn twist cap—at about the same time he’d determined that Ron wasn’t Señor Medellin’s Christian name.) For entertainment, aside from the editing and re-editing that occupied most of his time, he’d Brute-Forced access into a Wi-Fi network from one of the surrounding hotels. The connection almost always worked, and no one seemed to be monitoring the bandwidth he regularly chewed up. Now that Bob was gone, Mayhew gorged himself on all the amateur porn he could consume, usually late nights, or sometimes right after morning Mass at San Pedro Clavier, his horniest time of the day, when he’d seek refuge from the day’s heat and ubiquitous light like some inarticulate cave animal. The heat was something he’d not grown accustomed to. He was used to Chicago summers, the legions of elderly fading away in their narrow hovels. But this was something entirely other, an all-out frontal, almost ontological, assault on corporeality, a late-morning movie trailer for the Last Judgment. It was fucking hot… .