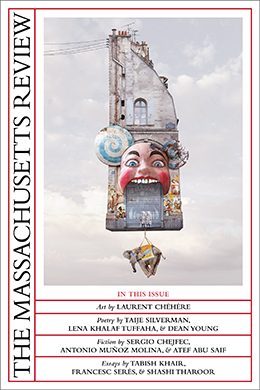 I think what I really enjoyed about this story, and what made me want to translate it, was the way Atef paints this vivid picture of several aspects of Gazan life, offering this very pointed political and social commentary along the way, but all with such a light touch. It never feels contrived, or dogmatic, and there's plenty of humor—which is such an achievement, given the intensely poignant material we are dealing with here. And that playful humor somehow doesn't detract from the reverence, the respect Atef shows his characters. Darwish is written in a particularly loving way, I find. There is a whole collection of stories featuring him, and I'd certainly like to translate more of them and get to know Darwish better. Atef was one of the early authors I translated back when I was getting started and he wasn't known in English, so it was lovely to come back around to his work many years later.

In terms of how I originally got interested in translating Arabic literature, I just remember that as an undergraduate it seemed like such an insanely difficult and deeply satisfying thing to do; I think actually a big part of the allure of it was the way it allowed me to sink much deeper into the language and how it works. It was also a way to explain the language (and my own language) to myself. Certainly being a literary translator often feels like continuing with my studies (and thinking of it that way helps make sense of the way it's generally remunerated!) and so winning a cash prize from an academic institution is fitting on more than one level, as well as being a huge honor.

Along with everyone else who knows Atef, I have obviously been extremely distressed by the news of his assault. I had just written to him to tell him about the prize win a couple of days before the attack happened. I am looking forward to news of his further recovery, and his return home to his family.

ALICE GUTHRIE is a British translator, editor, journalist and event producer specializing in Arabic-English literary and media content. Since 2008, her work has appeared in a range of international publications, with an increasing focus on Syria, where she studied Arabic between 2001 and 2003. She is literary producer for Shubbak, London’s biennial festival of Arab arts and culture, and bilingually edits Arabic-English translations for various literary presses. A former Translator in Residence at London’s Free Word Centre and American Literary Translators Association Fellow, in 2015 she was a recipient—with Syrian writer Rasha Abbas—of the Omi International Translation Lab fellowship.

ATEF ABU SAIF is a Palestinian writer living in Gaza. He has published six novels His novel A Suspended Life was shortlisted for the 2015 Arab Booker Prize. He edited a collection of short stories from Gaza titled The Book of Gaza, which includes one of his own short stories. His account of the Israeli attacks against Gaza in 2014 was published in English under the title The Drone Eats with Me: Diaries from a City Under Fire. Abu Saif holds a PhD in political science and teaches at the University of Al-Azhar in Gaza.