At a Distance: Sadness in Bartók's Final Quartet 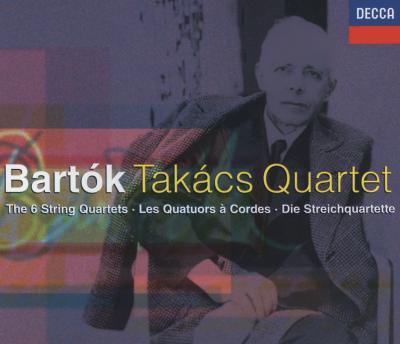 My music is open on the stand, yet at the beginning of Bela Bartók's sixth string quartet I can only listen. A string quartet is usually a collaborative effort, but for nearly a full minute our violist Geri plays the tune alone: Mesto—sad. At first I feel as if I am eavesdropping on a private sorrow, then, as the melody climbs higher, the viola becomes more declamatory, as if conscious of an audience. Like the listeners in the hall, I cannot evade the sad mood.

The initial outpouring dissipates and the melody fades away. Together we break the silence by playing the same loud notes and rhythm—vigorous bow strokes that banish the melancholy. No more sadness then. After another pause, we exchange hushed flurries of notes back and forth, the quietly bustling energy of the subsequent music offering a more sustained rejoinder to the opening tune: the slow introduction satisfactorily dismissed by faster music. At the end of the movement comes a solo of a different nature. After I ascend to a high note, the others resolve beneath me onto a sweet major chord. I am left playing alone, the effect peaceful, ethereal.

Bartók began working on the piece in August, 1939, while staying at the chalet of his patron Paul Sacher in the Swiss Alps. “Somehow I feel like a musician of olden times—the invited guest of a patron of the arts.” The Sachers took care of Bartók’s needs “from a distance,” allowing him the luxury of living and working alone “in an ethnographic object: a genuine peasant cottage” (Cooper 311). Such idyllic circumstances for composing were however short-lived. Bartók returned to Budapest just before Hitler invaded Poland on September 1st. He completed his sixth quartet in November, 1939, and the dilemma of whether or not to stay in Hungary soon reached a crisis point. A concert tour to America in the spring of 1940 paved the way for Bartók and his wife to leave Hungary for good in October: “This voyage is, actually, like plunging into the unknown from what is known but unbearable....” (326). The sixth quartet would be the last piece of music Bartók wrote in Hungary. Initially commissioned by friend and violinist Zoltan Székely (who with his colleagues of the Hungarian Quartet became stranded in Amsterdam during the war), the piece was first performed by the Kolisch Quartet in Town Hall, New York City on January 20th 1941, nearly three months after Bartók arrived in New York. It would turn out to be Bartók's final string quartet.

Mesto: Our cellist András plays the same viola melody that opened the piece—not, after all, so easily dismissed. At the beginning of the second movement, I enjoy the contradiction between the insistent sadness and the reassuring repetition of this beautiful tune. Joining in with a countermelody, I am shadowed by the second violin and viola; they play the same notes with a tremolo bow stroke, an accompaniment that surrounds the tune with an eerie shiver. As the cello melody becomes more impassioned, so too does the accompaniment. Although not yet equal participants, we are now helping to create the mood.

Again the melody fades to silence. At least that is how it is supposed to be: a sneeze explodes and echoes in the hall. Our second violinist Harumi waits a little longer than usual, allowing the silence to resume before playing her next four notes: an acknowledgement that within this piece silence has an important role to play, preceding many pivotal changes of emotion.

Three rising notes, a question, but the last note lower, doubtful. What next? Abruptly the first violin and cello enter, with the same four-note melodic shape, but transformed by the rigid rhythm of a march—a dysfunctional march, the instruments in pairs arguing back and forth, unwilling to march together. As this nightmare continues, the antagonism between the parts drives the music forward; both the rhythmic arguments between the four voices and independent lyrical lines that emerge, wailing against the underlying rhythm. If Bartók could not have predicted the specific horror of the death marches, the music nonetheless seems to depict the relentless advancement of Nazism. The obsessive repetition of the rhythm is not only uncomfortable to execute, requiring the same arm and finger muscles to work overtime, it also creates the unnerving illusion that the music is playing the musicians, the rhythm moving our bows and fingers, as if we are no longer capable of self-expression. Long after the social pleasantries of a post-concert dinner are navigated, I will awaken in the middle of the night, unable to escape the invasive rhythm.

Mesto: Now I begin the melody alone. Not as dramatic as the spring-like bustle of the first movement or the uncompromising march, but more persistent. Immediately the second violin and cello join with the same mezzo forte dynamics, now equal participants: what had began as a lonely utterance in the solo viola has in this third movement become more cooperative. Now Geri listens to the three of us: a mirror image of the opening, where the viola played and we listened. Later she joins the melody as it grows in intensity: again the music fades to silence—punctuated only by the roar of a motorcycle accelerating on the street outside.

For the quartet player, musical opportunities to revel in rudeness are scarce, but the section near the beginning of the Burletta is one of the most striking: the second violin hammering out a repeated eighth note rhythm—a jagged theme that ends with a slimy glissando, one pitch sliding into the next. Bartók adds the first violin to the slide but a quarter-tone lower—a dissonant and sarcastic sneer. After so many hours spent trying to make beautiful sounds and play in tune with each other, it is liberating to sound ugly, aggressively humorous—clowns entering to lampoon the tragic mood. After the cumulative intensity of three slow openings a bit of comic relief is welcome. But to laugh is to let down one’s guard. Increasingly Bartók makes the joke at our expense. As the Burletta unfolds, the humor becomes more and more grotesque. Over the course of the first three movements the reactions to the Mesto have become more extreme, increasingly desperate attempts to escape the sadness. And yet this apparent dichotomy does not tell the whole story. To craft his musical themes for the first three movements, Bartók astonishingly draws on material from the very same Mesto, transforming its melodic shapes to create sharply contrasting music. The clowns may rail against a particular emotion, seek to brush it to one side, but our extreme reaction is finally inseparable from the Mesto.

Mesto: Once again. I begin the melody but for the first time the initial sound comes not from a solo instrument but from first violin, second violin and viola, the cello joining in before I finish my phrase—still a lonely melody but now a shared sorrow. At first Bartók had intended this fourth version of the Mesto merely as a slow introduction to a faster fourth movement. By the time he finished the piece in Budapest in November 1939, he had significantly recast its role. In the final version not only does the Mesto provide the opening music for the first three movements, it now expands to take over the final movement, displacing Bartók's original plans for a livelier ending. Three times denied, the Mesto now takes center stage while the four voices, so often in conflict in previous movements, answer each other back and forth, commenting on and intensifying each others gestures, the communication of emotion unified.

Where Bartók had originally planned a fast movement, instead he brings back two major themes from the first movement, devoid of vigor and momentum. Harumi and Geri recall the tune that toward the end of the first movement had assumed a dancelike swagger; here it is transformed by the slower tempo and Bartók's instructions to the players: Più dolce, lontano—more sweetly, at a distance. They move their bows closer to the fingerboard to create a more fragile sound. By assigning the tune to the middle voices in the quartet, Bartók avoids the more extreme registers of first violin and cello, thus intensifying the sense of remoteness. Lontano: the music is to be experienced at a distance—an idea that Bartók somehow imagined in the autumn of 1939, against a background of advancing chaos and horror. Whether in a secluded Alpine chalet or his especially insulated music studio in Budapest, Bartók sought to protect his musical inspiration from the terrifying din of the outside world. For Bartók and his audience, the dolce lontano melody—heard at such as distance as to be almost out of reach—may be the saddest place in the whole piece. And yet whenever we play this passage, what I love is not the sense of distance but the closeness between second violin and viola. Bartók places the viola just a third lower than the violin: the smallest interval he could choose between the instruments without causing a dissonant clash of pitches. For those of us in the midst of the performance, the experience is necessarily one of innermost cooperation.

Towards the end of King Lear servants enter carrying the sleeping King on a chair. The doctor reassures Cordelia that after her father's fits of madness, Lear will awaken restored. The stage direction calls for music, believed by the Elizabethans to restore sanity. As the doctor urges Cordelia to approach her father, he instructs the musicians: “Louder the music there.” When Lear awakens, he thinks he has died, but slowly he recognizes his daughter and asks her forgiveness, acknowledging that he is a foolish old man. Toward the end of Bartók's final quartet, it is the moment of understanding and beauty between the inner voices that most affects me. In the context of the dissonance, sarcasm, and relentless rhythm that dominate the middle movements of the quartet, the mere presence of such a gesture contains a kernel of hope.

Bartók allowed the Mesto to disturb his original conception for the piece and in so doing created a space that allows the possibility of this duet, a duet that could not have emerged from the busy first movement, alien march, or grotesque burlesque. Written in the shadow of a world war, the trajectory of Bartók's sixth quartet is bleak but affirms the resilience of quiet utterances and their transformative power to take us where they will.

For a live concert recording of the Takács Quartet performing the final movement of Bartók’s sixth quartet for the Hong Kong University MUSE series in September 2019, please click here.

Edward Dusinberre is the first violinist of the Takács Quartet. He is the author of Beethoven for a Later Age: Living with the String Quartets.

The Takács Quartet will be performing the complete Bartók string quartets several times this season: www.takacsquartet.com