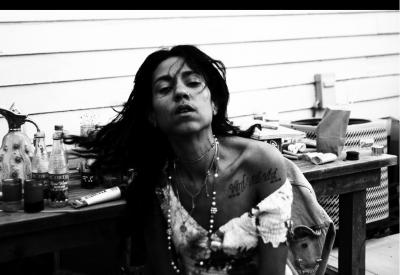 The first man Kalo ever loved was a hustler—a killer, too. In that way she was blessed. He taught her two things (more, but this is what she will share): all you got in this life is your balls and your word; play your hand close to your chest. The city Kalo grew up in changes infinitely and infinitesimally by the square foot. Dead men, ghosts, babies, slave ships, the drums, and jewelry (who knows how they got it on board), all these things crowd the sidewalks and jam up all the doorways, which are filled with bullet holes.
—from “Per Capita,” Volume 60, Issue 4 (Winter 2019)

Tell us about one of the first pieces you wrote.
I started writing stories and essays in middle school. I went to Catholic school and once wrote this essay about Malcolm X that somehow offended the priest who was in place at the church. He told my classroom teacher to take it down from being displayed in the hallway with the others. I was actually pretty thrilled by that. I felt like, ‘Wow my words made something happen!’ It was interesting also because the same priest encouraged my identity in other ways before and after that incident. I learned kind of early how to accept consequences for expressing myself truthfully.

What writer(s) or works have influenced the way you write now?
Toni Morrison, Mahmoud Darwish, Nizar Qabbani, John Trudell, Rabia al-Basri, Fred Moten, Arundhati Roy, James Baldwin, Claude McKay, Gabriel Garcia Marquez. More. These are the names that come up immediately for me. They run the gamut in genre and time period. Rabia al-Basri is an 8th century Iraqi poet. She is basically the mother of Sufism. Her grappling with the mystic and the divine and how it made her life a unique one as a woman really grabbed hold of me. The concept of fugitivity that Moten writes about, this state of being in perpetual refusal of the imposed standard really freed me.

I read The God of Small Things and The Bluest Eye back to back and it was a transformative reading experience. I was so completely educated in the sense of being taken from one state of knowledge to a greater one by the end of it. I’m so grateful for that experience. I read Beloved soon after that, which I regard more like a sacred text in terms of the approach I took reading it and how I refer to it now. Claude McKay’s Banjo is such an important work about the diaspora and Black people’s experience and resistance to the expectations of racism and modern capitalism. James Baldwin’s ability to command, to bend and stretch the English language, the sheer breadth of his creative intellectual output continues to astound me.

What other professions have you worked in?
I’ve worked in the past as an English professor. Before entering academia, I worked in the service industry; restaurants, hotels, tourism. I learned a lot there. As much, if not more, as in school.

What did you want to be when you were young?
I wanted to report from conflict zones and write about politics. I remember seeing the journalist Raghida Dergham on tv a lot, and I thought she was so smart and glamourous. I wanted to be something like that, I thought. Also, a rhythmic gymnast! The ones you only see at Olympics time who compete with the ribbon, hoop, clubs, and ball.

What inspired you to write this piece?
A lot of things. I looked at it as both a stand-alone piece and also the beginning of a narrative that will expand. I felt the need to try to order the myriad of historical and cultural events that I feel bring us to the present moment. The collected works of Jean-Michel Basquiat are a huge influence on the way the story is constructed, its language. I feel his paintings are texts meant to be consumed many ways. New Orleans slightly abstracted is also at the center of the story. Being from New Orleans, when I see Basquiat’s work, I see his acknowledgement and recognition of the city’s place in history. I appreciate that it has always meant a lot to me.

Is there a city or place, real or imagined, that influences your writing?
Pre-Katrina New Orleans, pre-colonial North America, post-colonial North America. Remembering places that have gone and imagining better futures, even if my writing is taking place in the actual present, is always my existential orientation toward what I’m trying to communicate.

Is there any specific music that aids you through the writing or editing process?
I don’t typically listen to music when I write. I have to get really quiet and be comfortable there. I’m too affected by music to listen to it while I write. My hands will leave the keyboard quickly.

Do you have any rituals or traditions that you do in order to write?
I typically write non-fiction in the morning through late morning if I can help it. When I’m writing fiction, I do morning and night writing. I need coffee. Cold and hot. I usually cook a full meal. I can’t write on an empty stomach. The better the food the better the writing for me usually.

Who typically gets the first read of your work?
Right now, the editor. I went to an MFA program and was a part of a pretty rigorous writing group for years. I had a few go-to readers, then. I got a lot of good advice. Right now, I try to mostly extrapolate on that and trust my instincts. Another set of trusted eyes is great though. I’ve gotten stuck in the feedback loop before and at some point you have to let the work go and see what happens.

If you could work in another art form what would it be?
I wish I knew more about audio mixing and sound engineering. They are so important to the process of making music. I love sound and music as a tool of communication. The process of perfecting a record is so tactile. I like that. Also, ceramics and pottery. Again, it’s the tactile process that I’m attracted to. Creating and shaping something with your hands.

What are you working on currently?
A few things at once, as usual. I’m editing more of the stories that populate this world of "Per Capita," a non-fiction book outline, and I just started a monthly arts criticism column at Burnaway magazine.

What are you reading right now?
Development Drowned and Reborn by Clyde Woods, and The Rebel by Albert Camus.

KRISTINA KAY ROBINSON is a writer, curator, and visual artist born and raised in New Orleans. Her writing in various genres has appeared in Guernica, The Baffler, The Nation, and Elle, among other outlets. She is a 2019 recipient of the Rabkin Prize for Visual Arts Journalism.