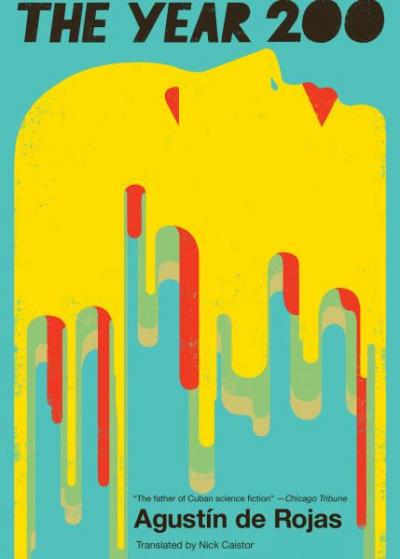 Cuban author Agustin de Rojas's The Year 200 forces American readers to grapple with their assumptions about Cuba, communism, and the human condition. The novel's Spanish publication in 1990 and English publication in 2016 line up with potentially crucial turning points in the U.S.'s perception of socialist societies. While technically the conclusion of a trilogy, Nick Caistor and Hebe Powell's English translation of The Year 200 stands on its own as a mindbending challenge to economic and philosophical ideologies.

The Year 200 opens two hundred years after the fall of Earth's capitalist Empire, as its most dedicated agents resurface, their consciousnesses having lain dormant in high-tech time capsules. They snatch the bodies of unsuspecting members of the Communist Federation and set in motion a plot to retake the hearts and minds of humanity. Perhaps aware that most readers are not as optimistic about human nature as he, Rojas inserts tests—actual, pen-to-paper tests—which the reader is expected to fill out. They start off easy, multiple-choice questions seeking the reader’s opinion about events in the story, linking famous quotes to the motivation of the characters. But as the book continues, the questions get more complex and introspective, until Rojas demands paragraphs and treatises, deftly guiding the reader through his leading questions—sometimes cheeky, sometimes alarmingly sincere. The addition of these tests to an already thought-provoking narrative makes The Year 200 into more than an engrossing read. For many American readers, it's a contant, ideological challenge.

As the “patron saint” of Cuban science fiction and an ardent supporter of the Soviet Union, Rojas’s work is inseparable from Cuba itself. By constructing a narrative in which Americans or members of other Capitalist societies identify with the villains, Rojas, through his translators and Restless Books, offers a timely wake-up call.  His tests add another layer to the self-reflection inflicted upon the reader. Although The Year 200 was written in the mid-eighties, the timing of its translation and publication invites parallels to the easing of the Cuban embargo, which is slowly allowing American involvement. This new context casts Americans specifically as the returning capitalists, expecting to find humanity in ruins and instead witnessing a paradise. It's not clear if Rojas actually thinks of Cuba as a socialist utopia, but his implicit casting of it as such complicates the one-dimensional American stereotype of Cuba as an impoverished dictatorship. Rojas's science fiction narrative therefore becomes an effective delivery system for a critique of one's perspective, as the best science fiction always is.

The Year 200 certainly fulfills its expected role as an allegorical exploration of the conflicts between socialism and capitalism, but it also reaches the ideal form of science fiction: a story which acts as a catalyst for the reader's exploration of what it means to be human. The capitalists' plan has a snag right from the beginning: their analysts had predicted that the Federation would fall apart in just a couple generations, but instead the world is thriving under a cooperative, unstructured, communist utopia. Citizens of the Federation work at jobs they want to perform, driven by creative need and unaffected by greed or monetary distress. Several fringe societies exist, as do a population of telepathic space explorers who play by their own rules, but the vast majority of Earth's population is living a Roddenberry-esque dream of scientific advancement and personal fulfillment. The agents of the Empire are convinced that prejudice and greed are the default state of humanity, and the citizens of the Federation have been more subtly conditioned, condemned to a half-life of weak and sheeplike behavior. By placing these worldviews in direct conflict, Rojas forces the reader to consider what they believe: Does human motivation come from greed, or from a drive to contribute to humanity? Is prejudice a natural component of our nature, or something introduced by imperialism?

The imperialist agents have two crucial weapons in their uphill battle to retake Earth: their disregard for human life and their ability to "condition" people's minds, brainwashing them. Soldiers cannot harm their leaders, love is programmable, and the agents can take over unsuspecting citizens' brains while using their victims' knowledge of the status quo to blend in. While no player can truly be called the main character, one heroine of the story is also a victim of the most severe conditioning, forced to fall in love with her brainwasher and doomed to die if he leaves her. The subplot of abuse victims triumphant serves as a metaphor for what Rojas sees as socialism's inevitable defeat of capitalism, and is woven into a broader exploration of just what motivates human beings.

Human nature is not generally a subject most people devote a lot of brain space to. What’s the relevance of figuring out what makes people tick when we’re all just trying to get by? But Rojas’s optimistic, socialist point of view made me realize just how thoroughly I, and those around me, buy into the cynical opposition.  However much I want to believe in the idea that people would work for personal development alone if all their physical needs were met, I can’t let go of the neoliberal assumption that people only work for material gain. The villains of the capitalist Empire seemed absolutely plausible characters—hardened spies, power-hungry generals, serial rapists and torturers. I had read them before, I know people capable of becoming them; they made sense to me. But the heroes of the socialist Federation, who value human life so thoroughly that the only aspect of their war council which Rojas reports is their deliberation over whether the intruders should be killed (and how, since none of them can do it without emotionally ruining themselves), didn’t ring true. I read with interest their discussions on love and the human condition, but they seemed almost childlike. I kept cynically anticipating the dark underbelly of their utopian society, and was never fully rewarded with one. Eventually I came to the frightening conclusion that I identified more with the villains of the book, or at least their view of human nature, than the heroes. Like the footsoldiers of the Empire, I have been conditioned: I have accepted greed as the default human condition.

If the Cuban embargo disappeared completely, if all Americans were presented with an accurate picture of the highs as well as the lows of Cuban society, would we start to think about socialism differently? Would the presentation of a functioning, relatively stable socialist society, regardless of its very real problems, complicate the straightforward narrative delivered to most Americans through required reading of Animal Farm and soundbites of the fall of the Berlin Wall? Rojas promises a science fiction adventure and capitalizes (pun intended) on the expectation of the "dark side of every utopia" trope, then blindsides the American reader with their own identification with the villains of the story. I'm sure the reading experience would be different for a self-identified Marxist or a citizen of a Communist country, but as a fairly typical, Capitalist-without-really-thinking-about-it American, this book certainly made me feel out of water. Yet while dealing with my continued discomfort, I began to feel like Rojas had plucked me from a polluted lake and told me of fresh water. I'm still not sure I buy his utopia or his rosy view of human nature, but The Year 200 accomplished the rare feat of making me reconsider my worldview—and we could all do with some ideological shaking-up right about now.

Beth Derr is an intern at the Massachusetts Review, and a student at Smith College.