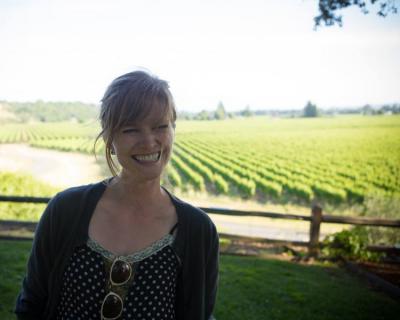 1. The world is the sum of facts and birds.

2.1. The contents of a glass of milk, which could be a human body transmitting songs about birds, are the lyrics of the songs transmitted by birds. . . .

—from "Thirteen Theories on the Better Understanding of Birds of Eligible Age," by Berta García Faet, translated by Kelsi Vanada (Fall 2017, Vol. 58, Issue 3)

Tell us about one of the first pieces you translated.
My first experience with translation was in the Translation Workshop in the International Writing Program at the University of Iowa. MFA students are paired with visiting writers to collaborate on a translation project, which means that my first translations were with the author by my side! I’m grateful for that. I worked with Venezuelan poet Natasha Tiniacos to translate two of her poems, “Picnic” and “RSVP.” They’re dense and full of wordplay, so it was a great challenge.

What writer(s) or works have influenced the way you write now?
Eleni Sikelianos, without a doubt. She taught my first Poetry class at the University of Denver, and has continued to be a mentor ever since. With every new book she writes, she reinvents herself as a writer. She and I share an interest in telling family stories through poems, as well as in hybrid work. Other main influences are C.D. Wright, Lorine Niedecker, and Alice Notley. It’s harder to name who has influenced the way I translate, though I’m really on board with something Aron Aji, the director of the MFA in Literary Translation at the University of Iowa, always says, which is that translation is not only about what gets “lost” from one language to another, but it’s also a chance to make English more “capacious,” to stretch what Anglophone readers are comfortable with, and help make them more aware of other literary and cultural traditions. There’s also translator Katie Silver’s idea of translation as subversion—that has helped me a lot since the 2016 election.

What other professions have you worked in?
I’ve done a lot of teaching. Before I left Denver to move to Iowa City for grad school, I was a K-8 Spanish and writing teacher. I’ve taught English as a Second Language in Chile, and Literature and Creative Writing to undergrads and high schoolers. I currently work for the International Writing Program (IWP) as an assistant to the Fall Residency director. I’ve also done a lot of editing, and I am a contributing editor for the “En Español” column of a local Iowa City paper.

What did you want to be when you were young?
My mom’s a painter, and when I was very young, I wanted to be one, too. Actually my parents are both artists (my dad’s a bluegrass musician). At some point in elementary school I realized writing was for me—first it was fiction for a long time, then I switched to poetry once I started taking classes in college. I never imagined my first book would be a translation, but I’m so happy it is.

What drew you to write a translation of this piece in particular?
Berta’s voice. It’s totally enthralling. Smart, funny, sarcastic. I also love the nested list form (borrowed from Wittgenstein) and how these propositions unite information from various realms to get at—or ultimately, to show that we always fail to get at—an explanation of our own emotions, especially love. Translation gives me a chance to write something totally foreign to what I write in my own poems, to take on another voice and style.

Is there a city or place, real or imagined, that influences your writing?
When it comes to my own poems, there’s an easy answer. I wouldn’t be a poet if it weren’t for my grandparents’ ranch in South Dakota (crazy story: I’m related to Laura Ingalls Wilder. My mom’s maiden name is Ingalls). I still draw from it—stories, family memory, the material and object world, the natural world, the complicated past (especially when it comes to the history of the peoples originally native to this place, which my family—white, of European descent—also calls home). And more than anything, the syntax of the speech of people who live there has propelled my interest in poetry built on syntactic rupture.

Is there any specific music that aids you through the writing or editing process?
A lot of my friends think it’s strange that I can’t write or translate (or read, for that matter) with music playing. I don’t need total quiet, but I get a little frantic if there’s music. Like it interferes with hearing myself, or the lines I’m trying to hear over from Spanish into English. But it’s kind of annoying because it means I can’t often work around other people, and I love to be around people.

Who typically gets the first read of your work?
If it’s a translation from Spanish, then it’s usually my Spanish-speaking friends, who are always super gracious about answering my questions when there are tricky moments in a text in Spanish that I need to get my head around as I’m choosing English equivalents. When it’s my own poems, usually it’s a couple of friends from the Workshop with whom I share a Google doc, in which we try to write something every day (it’s never really that frequently, unfortunately). I graduated from Workshopland recently, so I’m learning to share my work with fellow writers and translators without that institutional support.

If you could work in another art form, what would it be?
I’d like to improve as a photographer. I went through a pinhole camera phase like every wannabe hipster, built my own camera and everything. I got some good shots, but I never really knew what I was doing. Anyway, the pictures helped me write some poems when I was first in the Workshop.

What are you working on currently?
Berta’s book, which I’ve translated as The Eligible Age, is out this fall from Song Bridge Press, so we’re working on final revisions! I’m also translating some surrealist, ideologically infused “pop” prose poems by Azerbaijani-born Peruvian poet Álvaro Lasso, from his book Izquierda Unida (La Bella Varsovia, 2016). They’re wacky and fun and translating them is a great challenge, because they are so spare that each word must have just the right weight and tone in English. My favorite of them is kind of like a scene from Lord of the Flies: these schoolkids try to march off into the jungle to kill some surrealist poets, but their mothers helicopter in with flyswatters and take them home. I’m also tearing apart and trying to rebuild my poetry thesis from the Workshop into a book manuscript. Yikes.

KELSI VANADA is from Colorado and holds MFAs in Poetry (Iowa Writers' Workshop, 2016) and Literary Translation (University of Iowa, 2017). She translates from Spanish and Swedish, and her poems and translations have been published most recently in Columbia Poetry Review, EuropeNow, Asymptote, and Prelude. She was a 2016 ALTA Travel Fellow and currently works for the International Writing Program. Her first translation, The Eligible Age by Berta García Faet, is forthcoming from Song Bridge Press.