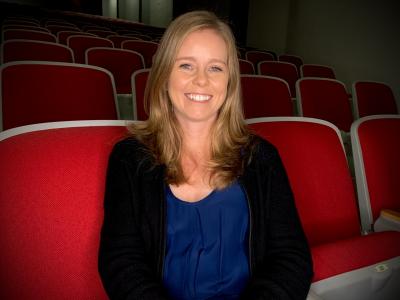 If Pappaw hadn’t been murdered, I wouldn’t even consider doing this test. Yet, here I am. Against my better judgment, I spit into the plastic tube then check to see if I’ve reached the fill line. Not even close. I suck the inside of my cheeks to produce more saliva and spit again and again until the tube is full.
—from “Genetic Driftwood” Volume 60, Issue 4 (Winter 2019)

Tell us about one of the first pieces you wrote.
In high school and undergrad, I wrote so much bad poetry. Notebooks full of absolute tripe. Not a single one merits mentioning.

What writer(s) or works have influenced the way you write now?
I’ll never forget the first time I read Flannery O’Connor’s “Good Country People.” I think our professor was hungover and just had us reading the story to ourselves. The room was totally quiet, and I completely lost it when Manley Pointer stole poor Hulga’s prosthetic leg and left her stranded in the loft of a barn. He stole her leg and ran away! I laughed so hard my stomach and face muscles ached. Everyone stared at me like I’d lost my mind, but I didn’t care. I couldn’t stop. It was a revelation. That was the first time I realized that writers could be both serious and funny.

I still seek out writers who can slay me with a giggle. Reading George Saunders taught me how to use sentence structure and rhythm for comedic effect. Mary Karr is a master, too. Margaret Atwood, Manuel Gonzales, my dear friend Maurice Carlos Ruffin. I could go on all day.

What other professions have you worked in?
Before I realized I could parlay my love of the written word into a career, I sold drugs (legally for pharmaceutical companies), slung beer as a bartender, sold shoes in a small boutique, and aired traffic and weather reports for radio stations.

What did you want to be when you were young?
When I was really small, I wanted to be a garbage collector because I thought it would be fun to ride on the back of the trucks. I also wanted to be The Namer of Things. You know, the person who decides what to call new paint colors or materials developed for NASA. I still want this job, if anyone is hiring.

What inspired you to write this piece?
I don’t think we have fully processed or even realized the many ways that public DNA testing will affect our society. The majority of Americans of Anglo-Saxon descent can already be genetically mapped whether they’ve done a DNA test or not. This can be great in terms of law enforcement closing unsolved cases or exonerating the wrongfully accused, but it’s also redefining families. Which, I suppose could be a good thing depending on how much you like your family.

Is there a city or place, real or imagined, that influences your writing?
I grew up in North Louisiana then moved to the New Orleans area when I was in high school. I’ve also spent a great deal of time in rural Tennessee. The dichotomy between New Orleans and everywhere else couldn’t be any deeper, and I find that dichotomy endlessly fascinating. Like, why is everywhere else okay with not being New Orleans?

Who typically gets the first read of your work?
I have the smartest friends in the world! Seriously, one great thing about New Orleans is the embarrassment of riches we enjoy in terms of good people with literary chops. I’m a member of the Peauxdunque Writers Alliance, a group of writers that started in the French Quarter a decade ago, but now includes members from across the country. We convene monthly and share new work.

If you could work in another art form what would it be?
I do work in another medium: glitter. I belong to Muses, the all-female Mardi Gras krewe that is consistently voted the best night parade in New Orleans. Our signature throws are glittered shoes. I’m currently glittering a Doc Marten into a peacock.

What are you working on currently?
I’m writing a true crime/memoir hybrid about my grandfather’s murder. He was shot six times in his living room on a Sunday morning in 2012. The case has not been solved, and I’m obsessed with knowing what happened. In writing about his death, I realized that six people I’ve been close to have been shot to death. Some by their own hand, some accidently, and one unsolved murder. That seems like a lot to me. I want to make some sense of all these rotten stories.

What are you reading right now?
I just finished Patrick Radden Keefe’s Say Nothing: A True Story of Murder and Memory in Northern Ireland. He tells the story of the IRA and the Troubles through the individuals who participated. It’s powerful. I also keep rereading Alex Marzano-Lesnevich’s The Fact of a Body, which makes really smart moves in terms of structure and scenework. This is my fourth re-read, and I keep learning from it. Sarah Broom’s book, The Yellow House, about her home in New Orleans East is also knocking my socks off.

APRIL BLEVINS PEJIC is a graduate of the MFA program at the University of New Orleans. Her essay “A History We Can Live With” was noted in the Best American Essays 2015. Her work has appeared in the Cimarron Review, Green Briar Review, and Arcadia Magazine, among others. She teaches English at Nicholls State University and is a member of the Peauxdunque Writers Alliance.