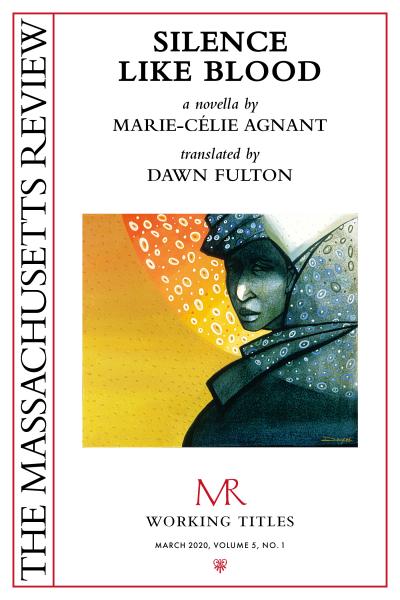 The Massachusetts Review presents the latest Working Titles e-book: Silence Like Blood, a novella by Marie-Célie Agnant, translated and with an introduction by Dawn Fulton. Available now!

If I’m writing to you, it’s only out of respect for the promise I made, not, as you asked, to tell you everything I see. For I can only see what is shown. This letter will likely be incoherent and very long. I can’t help that. But I will try to put my heart into it, even if I know it won’t be easy to bring the words into being, to translate the strange feeling of emptiness that has come over me since I arrived. I can already see the words lined up on the page, stiff, motionless, impassive. Like a child creating a fantasy world, I stubbornly arrange and rearrange them, entreat them, beg them to come to life. I persist in making them my guardians, curators of my illusions, since they’re all I have left. I’ve lost everything in coming back.

Most people I meet here, before they even say hello, ask me this question: “And when are you leaving?” It’s not good to stay too long, it seems; nothing is quite how it was. The people are hard to make out – they’re “between dogs and wolves”– and I have the horrible feeling they’re hiding something, an unspoken secret I can’t begin to grasp. I’m wandering in a labyrinth, and I can’t find the landmarks or signposts anymore. At gatherings, any friendship has been replaced by distrust, and instead of language there’s a new code made of sounds that seem to be molded out of some light, ethereal plastic.

Speaking of dogs and wolves, I was the laughingstock of everyone last night, at a party my hosts had organized to celebrate my "return." They had invited people I knew vaguely by name. 'People you absolutely must meet,' they had proclaimed. Not left-wing or right-wing, just activists, they had noted carefully, watching me as if they expected a response. People who consider themselves ín the democratic movement,' as they say here."