The Keepers of the Ghost Bird (Working Title 2.4) 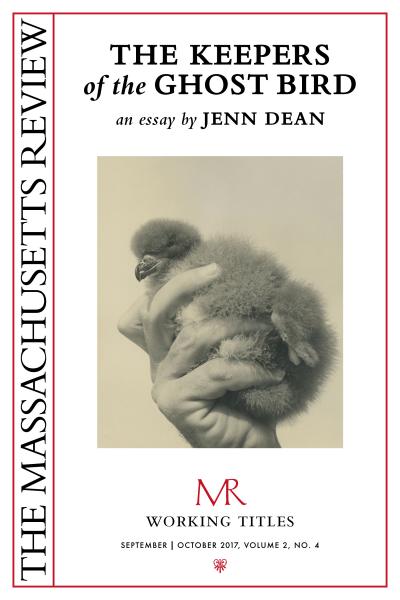 The Massachusetts Review presents the latest Working Titles e-book: THE KEEPERS OF THE GHOST BIRD by Jenn Dean—available this week!

From THE KEEPERS OF THE GHOST BIRD:

From the air, Bermuda resembles a jeweled and pregnant seahorse, hanging by its tail from the Sargasso Sea. Its top and bottom wrap around two ancient volcanic calderas, one at Castle Harbor and one at Dockyards. In between, Bermuda’s twenty-one square miles twine along a fragile, curving spine of limestone. From a taxi van, the coastline uncurls past the windows: the rose sand, the bitter green foliage of tamarisk trees, stunted windblown evergreens, and the blue southern tip of the Sea.

Beneath the water, pillow-sized blue parrotfish gnaw algae off the reefs with their beaks, excreting great clouds of sand in the process. It is said that all of the beaches on Bermuda have been through a parrotfish at least twice. When you walk anywhere, you are strolling on the tiny skeletons of reef creatures, eaten and recycled into sand, compacted over centuries into limestone. All of the limestone on Bermuda looks carved, as if someone took a giant comb and raked lines across the cliffs, revealing not the effects of jackhammers but of ancient winds. Everything bends to the will of the wind: the birds, facing it with wings arched, stay in place as if pinned to the sky. The palm fronds rattle like bones, as if all the skeletons of sailors who died over the centuries on the infamous reefs have sprung to life to dance.

Depending on your view, Bermuda is either haunted or enchanted. The reefs lie beneath the waves, mysterious and invisible. There are rim reefs, patch reefs, champagne breakers, and boiler reefs. They extend so far north, ancient sailors always thought they had sailed far enough around them, only to crash right up onto them, even as the lights of St. Elmo danced on their masts for good luck. Glass ampoules of morphine from old wrecks are common souvenirs around the island; Bermudians used to induce ships to wreck upon the reefs for such bounty. It is written that you could see the flickering lights of people taking treasure off the boats. In one account, a minister interrupted his evening sermon, warning his parishioners to wait for him to take off his cloth so that everyone had a fair shake at the treasure. . .