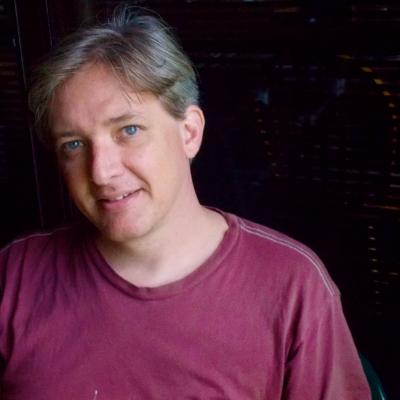 While the storm dances outside, rats huddle in the shadows at the far end of the attic. Julie can barely make them out from where she sits, an old wooden-handled axe and a battery-operated lantern by her side, the gable window rattling in its frame above. Other shadows shuffle about down close to the eaves. Raccoons, possums. Julie tries not to think what else. Ghosts, probably.
—from "When the Storm Comes," Volume 61, Issue 1 (Spring 2020)

Tell us about one of the first pieces you wrote.
When I was in 8th grade English class, our poetry unit started with the assignment to complete the sentence, “Poetry is like ________.” I wrote in the word “shit,” then left to get some water, intending to change it before it was handed up. When I got back to my desk, the girl in front of me—who had just laughed at my transgression—had already handed it in. The teacher used it as an example of the variety of expression useful in poetry. Dodged a bullet. And was intrigued.

What writer(s) or works have influenced the way you write now?
Tom Franklin’s work taught me how to get through the lyricism of language and to the dramatic heart of interpersonal conflict, all while paying attention to the larger social forces at work in the rural and small-town Central Alabama universe he and I share as a background. Lewis Nordan’s work taught me how to get through the larger social forces of the South and the drama of interpersonal conflict and back to the lyricism of language. Both of them taught me good lessons in moving a story through time and space. And Barry Hannah’s writing reminded me it’s OK to let the words take control for a little while and show you where the story is.

What inspired you to write this piece?
A confluence of things led me to begin writing “When the Storm Comes.” In 2015, the tenth anniversary of Hurricane Katrina brought back a lot of memories from living in Southeast Louisiana during that time. We all seemed to be walking around with freshened scars of the stories of families huddled in their Ninth Ward attics with an axe, ready to bust through to the roof; of gristled old fishermen in Plaquemines and St. Bernard Parishes clinging to trees, their social security numbers scrawled on their arms to help identify their bodies. At the same time, in my law practice we were deep into a series of cases involving the disappearing coastal wetlands of Louisiana, and the various causes, and how areas of once healthy and intact marshland were steadily converting into open water, whole communities literally removed from the maps. Perhaps to deal with the frustrations of writing in my lawyer life about those problems writ large, I began writing “When the Storm Comes” as a way to bring it all back down to an intensely personal level. One person. One storm. One hope.

Is there a city or place, real or imagined, that influences your writing?
I have a whole series of short stories and a novella that I have written and published that are inspired by Selma, Alabama, the town where I grew up. I graduated from Selma High School in 1990, during a year of intense protest and conflict over the firing of the town’s first African-American superintendent of the city schools system. In the aftermath of that strife (really just one point on a decades-long continuum of oppression, protest, backlash, progress, rinse-and-repeat, as to which Selma is an exemplar), I spent twenty years trying to forget that place and that time, but it was always trying to come through, and I’ve finally started learning how to write it, both in fiction and in CNF. Other than that, I am attracted to writing the personal truths that exist in less-traditionally-literary liminal spaces, like suburbs and vanishing marshlands.

Is there any specific music that aids you through the writing or editing process?
Any of the recordings from the 1960 European tour of the Miles Davis Quintet; a playlist I’ve assembled of mellow/groove songs from the Clash; Jason Isbell. Those are on my constant go-to set of writing music, with Radiohead and Wilco thrown in from time to time (actually, a playlist I’ve put together called “wilcohead”), along with come Tribe Called Quest and Tori Amos. And … oh man, this is like those ten top album desert-island lists, that are always wrong the moment you answer them. The Pixies are definitely good for writing, too, and Jane’s Addiction. I probably should have stopped at the first sentence, and just gone with the fiction that this question could have a finite answer.

Do you have any rituals or traditions that you do in order to write?
I wish I had some cool writing rituals, but the time to write is so scratched and desperately grasped from all the other things of life that I can’t really afford to add rituals into the mix.

Who typically gets the first read of your work?
My lovely writing community in the Peauxdunque Writers Alliance. We’ve been writing together since 2007. And before that (and subsumed within that), I’ve been trading drafts with my writing-spouse, Maurice Ruffin, since 2005. I know writing is “solitary,” etc., but I’m not the writer I am without my community.

What are you working on currently?
For the longest time, too many years (except it can’t be “too many” when it keeps getting better), a fellow Peauxdunquian, J.Ed. Marston, and I have been working on a collaborative novel. It really is almost finished this time. For the past year I’ve been early in the process on a couple of other novel projects, still trying to figure out which one is going to grab me by the collar and demand my undivided attention. And always working through CNF projects, long and short, as they come up.

What are you reading right now?
Currently reading Michael Zapata’s The Lost Book of Adana Moreau and Wiley Cash’s A Land More Kind than Home. Immediately on deck are Sahar Mustafah’s The Beauty of Your Face and Taylor Brown's Pride of Eden. And very much looking forward to M.O. Walsh’s The Big Door Prize (due out in July) and David Joy's When These Mountains Burn (due out in August).