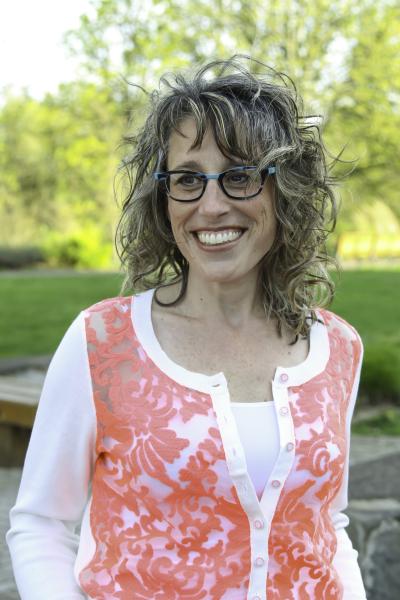 The old couch cushion tipped you toward him;
hunched and skeletal, he didn't make a dent.
See how that could feel to him like pressure?
(His therapist, gently.) But (her quick glance,
his nod, negotiations with the god)
—From "The Underworld Also Swallows Sons," Volume 61, Issue 1 (Spring 2020)

Tell us about one of the first pieces you wrote.
In elementary school, I wrote what felt to me like an epic poem (in rhymed quatrains) about a hero called Fred.  What was truly “epic”: it won a contest in my northwest Chicago school district, so I was invited to one of the Young Writer’s Workshops that Gwendolyn Brooks hosted as the Poet Laureate of Illinois.  When she recited “We Real Cool,” an entire gymnasium of students swooned and I remember thinking, Whoa—I want to do that.  Here on my desk, I have the Young Poet’s Primer she signed for me all those years ago: “Hi Jenny, Sincerely, Gwen Brooks.” (“Gwen!”)

What writer(s) or works have influenced the way you write now?
Two poets who continue to influence every poem I write are the teachers I was lucky enough to study with most closely: Yusef Komunyakaa (when I was an undergraduate) and Bruce Weigl (when I was earning my MFA).  They inspire in me the same gut-level awe that Gwendolyn Brooks did, and I’ll always be learning from their work.  Both of them have written about their experiences in the Vietnam war, and something essential they taught me was how to write from the trenches: in my case, of chronic illness, motherhood, and looming natural disaster.

What other professions have you worked in?
I love teaching and I’m grateful to have been in one classroom or another for almost thirty years: working with undergraduates and poets earning their MFAs, recovering substance abusers and teenagers in juvenile hall, retirees and returning adult students, high schoolers and even kindergartners who couldn’t write yet but dictated astounding poems to me.

What did you want to be when you were young?
When my parents were moving out of my childhood home a few years ago, they found My Book about Me, a fill-in-the-blank Dr. Seuss book that I’d started writing in when I was five years old.  On the “When I grow up, I want to be a _____” page, I’d printed “dancer” in purple crayon; later, I x’ed that out in pen, wrote “stewardess,” and circled it with certainty.

What inspired you to write this piece?
I’ve been teaching a class on Greek myth in contemporary poetry, and along with my students I’ve been using the framework of myth to help me write about struggles unfolding in my own life.  I keep coming back to the Persephone and Demeter myth because it speaks to me so powerfully as both daughter and mother.  As Eavan Boland says in her poem “The Pomegranate”: “the best thing about the legend is/I can enter it anywhere.  And have.”

Is there a city or place, real or imagined, that influences your writing?
The Greek myths have sparked my thinking about the underworld and the surface world, and about our movement between those lands of darkness and light.  I’m exploring what triggers our shifts between them and how we navigate those difficult transitions.

Who typically gets the first read of your work?
My husband Keith has always been my first and most generous audience.  I invariably end up crying by the end of every new poem I read to him—at that early stage, the work feels so tender and vulnerable, and each time, I’m overwhelmed with gratitude for the poems that keep coming.

If you could work in another art form what would it be?
Many of my close friends are visual artists whose work I deeply admire and who I’d love to learn from.  I’m especially drawn to collage and mixed-media pieces that involve text.  I’d also love to work as a florist—I enter a wonderfully meditative space when I bring home a few bunches of flowers and focus on them stem by stem: stripping the leaves, trimming the ends, arranging the blooms so they all have a spot in the sunlight.

What are you working on currently?
I’m working on my third collection, The Really Big One.  Though my surname paired with Oregon’s urgent earthquake preparation initially launched this project, the collection has expanded to consider the ways we—as individuals, as families, as a society—cycle through periods of shattering and healing.

What are you reading right now?
I reread Ross Gay’s Catalog of Unabashed Gratitude constantly; he teaches me how to embrace it all—the dark and the light, stretches of struggle and moments of mercy—encouraging me to be a more expansive and generous writer and human.

JENNIFER RICHTER's two poetry collections have both been named Oregon Book Award Finalists: her second book, No Acute Distress, was chosen by Major Jackson; her first, Threshold, by Robert Pinsky. Richter has been awarded an Oregon Literary Fellowship as well as a Wallace Stegner Fellowship and Jones Lectureship in Poetry by Stanford University; she's currently an Assistant Professor at Oregon State University.