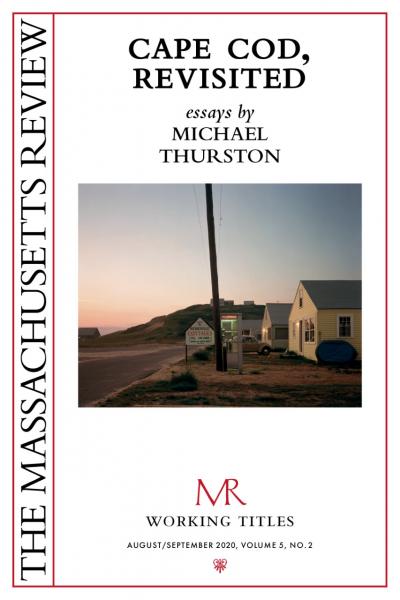 The Massachusetts Review presents the newest e-book in our Working Titles series: Cape Cod, Revisited by Michael Thurston, with an introduction by Russ Rymer. Available now!

"Cape Cod begins with a shipwreck.

On October 9, 1849, Henry David Thoreau and William Ellery Channing traveled together to Cape Cod. Having planned to take the steamer from Boston to Provincetown but learning upon arrival in Boston that the boat had been delayed by a storm and that, in the same storm, the St. John had run aground just off Cohasset (“Death!” read the handbill they noticed in the streets: “one hundred and forty five lives lost at Cohasset”), they changed course. Thoreau and Channing opted instead for the overland route to the Cape and, not coincidentally (“we decided to go by way of Cohasset”), a chance to see the wreckage of the ship. The first chapter of Thoreau’s Cape Cod is devoted to the shipwreck and Thoreau’s reaction to it— both immediate and metaphorically considered. This makes the book, as Robert Richardson has it in his biography, “Thoreau’s exploration of salvation,” yet, as Richardson also notes, for Thoreau “there is no salvation, there is only salvage.”

"The Shipwreck” begins with “Cape Cod.”

I say Cape Cod begins with a shipwreck, but, except for its appearance as the title of the first chapter, no shipwreck shows up throughout the first three pages. It takes Thoreau only a paragraph, though, to etymologize (“I suppose that the word Cape is from the French cap; which is from the Latin caput, a head; which is, perhaps, from the verb capere, to take; —that being the part by which we take hold of a thing” [3]) and to craft a simile (“the bared and bended arm,” like that of a boxer, with which Massachusetts defends herself from “her Atlantic adversary”). The etymological habit can become contagious. We might notice, for example, that Richardson’s key terms for the book—“salvation” and “salvage”—derive from the Latin salve, which means, of course, to save, whether the soul from the fallen world and the torments of Hell or the bits and pieces for their remaining usefulness, these being the ways in which, after disaster or injury (“salve,” as in a soothing balm), we try to feel better. And saving is our way of preparing, too, for the unpredictable future. We set aside some portion so that it might accrue interest and compound itself into the means of sustenance. . ."