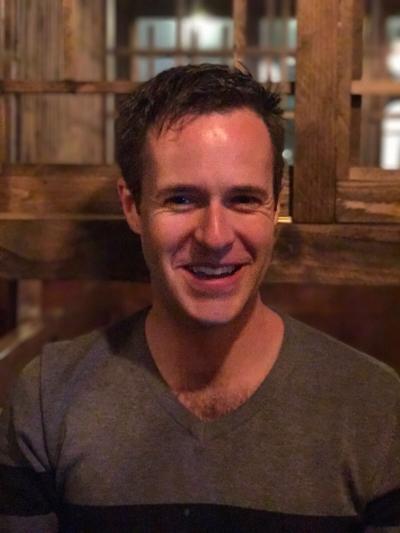 Rain fell violently through the night. San Ye thought of the gravestones in Dongba, and the flesh and bones beneath, and the clothes and things buried with the bodies. The coffins must be swimming in slimy muck. . .he couldn't sleep.

He tossed and turned until dawn, got up, and looked outside to see the bridge over the river had collapsed. Sodden planks drifted on the current, spinning gleefully before floating away with bits of rope, branches, and the sedge grass, never to be seen again.
—from "Song of Parting" by Lu Min, Translated by Michael Day, Volume 61, Issue 3 (Fall 2020)

Tell us about one of the first pieces you translated.
Let’s talk about Dorothy Tse’s “Chickens,” the first translation I did that was published, setting aside earlier immature stuff. It’s a surreal story about a town where the women are herded into chicken cages, full of ambiguous turns of phrase and events that are outright odd. The piece appeared in Structo alongside a translation of the same story by Natascha Bruce—both our translations won the Bai Meigui Contest put on by Leeds University in the UK, so that’s how this came about. Natascha and I made some contrasting choices, starting with the title, which in her version is “Chicken.” This works just as well because there is no singular or plural in Chinese. The two of us got the chance to take a class with Nicky Harman (translator of Jia Pingwa and many other authors), who still mentors me, gives me advice, and sends me work, so a lot came out of that translation. I was also proud to translate Dorothy’s work because I like her and had already been reading her before hearing a word about the contest. Snow and Shadow, translated by Nicky Harman, comes highly recommended.

What writer(s) or works have influenced the way you write now?
The authors I’ve translated have had the biggest impact because I’ve spent so long trying to get in their heads and channel their voices. For example, Lu Min has a soft touch, but there’s power underneath, and she’ll sometimes sneak up on you with surprisingly forceful phrases and sentences. So from reading and translating her, I’ve learned to imitate that combination of softness and power.

Recently I’ve been into Joseph Campbell, an anthropologist who wrote about the unity of cultures and religions, storytelling, and creativity. He was a really smart guy and reading him has clarified a lot of things for me. Also, I like authors who incorporate non-literary influences, like J.G. Ballard, who named the Los Angeles Yellow Pages one of his favorite books, calling it “as surrealist in its way as Dali’s autobiography.” The idea that cultural trash can be golden is a useful way to look at the world as a creative person.

What did you want to be when you were young?
As a kid, I wanted to be either a writer or a boxer. I was always writing stories and making comic books and things like that, in addition to punching the living daylights out of punching bag after punching bag. I recall several dinosaur punching bags and also one with Godzilla on it. They were flimsy and obviously not made to withstand the fury of my small fists. All of them soon turned into sad, deflated lumps. Paper can’t turn into a sad, deflated lump. It stays sharp and flat no matter what—that’s the amazing thing about it. Also, if I were a boxer, a blow to the head could do in the linguistic centers of my brain, but sitting in a chair all day wrangling with words wouldn’t rule out taking up physical training later on, and so I left violence behind and took up creation. But I still think sometimes that the universe needs more sad, deflated things to balance out the flat, sharp things. And if no one destroys things, how are they to turn sad and deflated? Alas, here I am in my mid-thirties. It’s honestly probably too late to take up boxing training, and that’s how dreams die.

What drew you to write a translation of this piece in particular?
Lu Min writes about dark, challenging subject matter in a completely palatable, accessible way. I don’t know how she does it, even though I translate her and I feel like I should. “Song of Parting” is a story about death and loss, but it has a warm, human feel. It also shows a lot of sympathy for eccentric outsiders. Another example: “Scissors, Shining” is a novella about a closeted gay tailor who is unable to bear his inner torment and commits a terrible act of destructive violence, but what’s amazing is how many light, humorous moments there are in it. Another example of her magic, which come to think of it probably has to do with her big heart.

Is there a city or place, real or imagined, that influences your writing?
The blue skies and green grass and white picket fences of the American Midwest—it’s the type of soothing, well-ordered landscape that can ground an unbridled imagination. Hundred-year-old houses filled with handmade things and unique features—they can speak when it’s quiet, and they have their own personalities, like people. Los Angeles—the world’s pockets have been emptied out, and everything valuable and trashy has ended up all jumbled in a heap. Those are some of the places I have lived that have shaped my imagination.

No stronger wind than the one that blows
Down a lonesome railroad line
No prettier sight than looking back
On a town you left behind.
-Townes Van Zandt

Is there any specific music that aids you through the writing or editing process?
Music with lyrics distracts me, so I usually don’t listen to it while working, but ambient and minimalist music is perfect for getting into a productive flow state—Music for 18 Musicians by Steve Reich, Shri Camel by Terry Riley, or Quique by Seefeel, for example.

Do you have any rituals or traditions that you do in order to write?
Not really, but I’ll say a couple things. Being in a habit of writing or translating every day is very helpful. We all do better work when we are warmed up. Also, I am a health nut and follow Chinese medicine. Mind-body practices help your thoughts and imagination flow more smoothly.

If you could work in another art form what would it be?
I’m not sure if translation is an art. It definitely gives less ego satisfaction than some other art forms, so if I wanted to aggrandize my ego, I’d write a book called Of Grammatology and spend the rest of my career half-explaining it, or I’d be like Diogenes and mock everyone while seeming to know something and someone would write down everything I said after I died.

What are you working on currently?
I’m working on some other pieces by Lu Min and an author named Zhu Hui who is under-translated at the time being, though we’re working on fixing that. He is an author with a very wide range who can pull off everything from sweet sentimentality to speculative detective fiction. We recently published his “Lip Service” in the anthology That We May Live by Two Lines Press, and “A Dreamlike Song” will be coming out soon in Georgia Review. Zhu Hui has taught me a lot. He has a way of inserting surreal touches and dancing around the point, which makes him hard to translate, but doing so has helped me grow. I’m also working with an author named Liu Ying who lives in New York. She writes great dialogue, so I spent a long time polishing my dialogue chops before I dared try my hand translating her. It’s been a great learning opportunity. We have a piece coming out soon in Another Chicago Magazine.

What are you reading right now?
For the sake of this answer, we’ll say I’m “reading” all the books that have bookmarks in them or are lying open around the house, which at the moment are:

Neuromancer by William Gibson. I’ve been making a deliberate effort to read more sci-fi, and I’m loving the wild prose style of this book and am trying to learn from it so I can rip it off. Example: “He’d operated on an almost permanent adrenaline high, a by-product of youth and proficiency, jacked into a custom cyberspace deck that projected his disembodied consciousness into the consensual hallucination that was the matrix.” So weird, artificial, and cool.

An Unexpected Light by Jason Elliot—I’m rereading this travelogue of Afghanistan first of all because it’s really good, and second, because it’s 2020 and I’m stuck at home and it helps scratch the wandering itch. It’s written in a spirit of true adventure and goes deeply into the internal psychological factors that drove the author to traipse around a warzone.

The 48 Laws of Power by Robert Greene—who doesn’t enjoy projecting themselves into intrigue and power games? In all seriousness, this is a fascinating book that draws ties between history, politics, and philosophy across different times.

Goose of Hermogenes by Ithell Colquhoun—the only novel ever published by a British female author better known as a surrealist painter. The back cover says that it “might be described as a gothic novel, an occult picaresque or a surreal fantasy,” which is a pretty accurate description. The chapter divisions are based on the stages of alchemy. It’s only 100-some pages long, but there’s so much beauty and strangeness packed into it.

There are some other books lying around, to be honest, but let’s cap it off at four, or this will turn into a book itself. Thanks so much for asking these thought-provoking questions and letting me take part in this interview.

MICHAEL DAY is a traveler, writer, and translator from Chinese and Japanese. He splits his time between California and Latin America. His work has previously appeared in the Los Angeles Review of Books, China Channel, Words Without Borders, Chicago Quarterly Review, Structo, and the anthology That We May Live from Two Lines Press, among other publications. He won the 2015 Bai Meigui Award for Chinese to English literary translation.