- By Roque Dalton and Katherine Silver 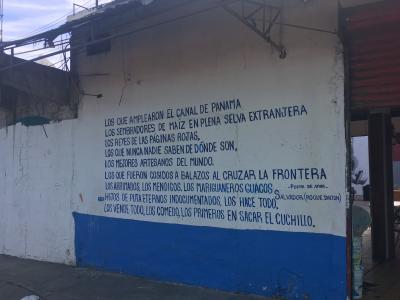 (Photo: Lines from Roque Dalton's Poema de Amor on a wall near the offices of Al Otro Lado in Tijuana, México, courtesy of Katherine Silver)

Translated from Spanish by Katherine Silver

Those men who widened the Panama Canal
(and were paid from the silver roll instead of the gold roll)
who rebuilt the Pacific Fleet
at bases in California,
who rotted in jails in Guatemala,
Mexico, Honduras, Nicaragua,
for being thieves, smugglers, scam artists,
for being hungry,
those always under suspicion
(“I hereby present this individual,
suspected of vagrancy aggravated
by being Salvadoran”)
those women who fill the bars and bordellos
of all the ports and capitals in the region
(“La gruta azul,” El Calzoncito,” “Happyland”),
those farmers who grow corn in foreign jungles,
those kings of the crime page
those who nobody ever knows where they’re from
who are the best craftsmen in the world
who were gunned down crossing the border,
who died of malaria
or the sting of a scorpion or the bite of a barba amarilla
in the inferno of the banana plantations,
who cry drunkenly to the national anthem
under a Pacific cyclone or a northern snowstorm,
the scroungers, the beggars, the potheads,
the motherfucking Salvadoran guanacos
those who barely managed to return,
who had a bit more luck,
the eternally undocumented,
the do-it-alls, sell-it-alls, eat-it-alls,
the first to draw their knives,
the saddest sad people in the world,
my compatriots,
my brothers and sisters.

Roque Dalton was a Salvadoran poet, essayist, journalist, and revolutionary. He was assassinated in 1975.

Those women who rise at dawn to tortillar
who work the milpas and carry the water,
who cook and clean and feed,
who wash and dress and give succor,
those women whose husbands, fathers, kidnappers, pimps
call bitch, whore, negra, india, fea, useless piece of shit
while they beat and chain and rape them,
with belt buckles and machetes and wires and fists
who tell them they don’t need to study
because all they need to do is take care
of fathers, husbands, rapists, drunkards,
those women who carry one child, two, three
on their backs, in their bellies, on La Bestia,
through rivers and over bridges,
with documents and without,
who tell their stories again and again,
to lawyers and judges and unnamed oficiales, in iceboxes and cages,
who escape their torturers to save their children
and themselves, to save us from ourselves,
those women I admire as resilient but I cannot fathom
the sadness, the loneliness, the effort.
Compatriotas, I’m not fit to call you sisters.

Katherine Silver is the former program director of the BANFF International Translation Centre. She has been translating Spanish and Latin American literature for over thirty years. She also works as a volunteer interpreter for asylum seekers.