What's the News in Trumpworld? 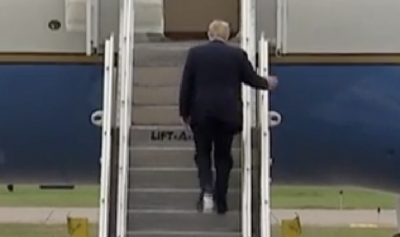 It’s so fitting that the Trump era has ushered in toilet paper shortages in the US. Should the current coup attempt somehow still succeed, and we find ourselves in an endless loop of rule-by-tweet-from-the-gilded-toilet known as Trumpworld, fear not, my fellow Americans—we Soviet refugees can teach you a lot about how to get along without.

When my family came to the US from Odessa in 1977, we had never seen saran wrap, sandwich baggies, or paper towels. We survived just fine. And you’ll be fine too, or at least you’ll be forced to pretend to be fine. Let me tell you how to manage, while at the same time leveraging that reviled organ of propaganda, the purveyor of fake news, the newspaper.

In the USSR, newspapers were revered, not reviled. They, or their fragments, wrapped presents, cleaned windows, and midwifed our food along the entire length of the alimentary canal. Looking back now, I am surprised that the Party didn't bother to ban their many undignified reuses.

Our daily newspapers came directly to our mailbox. Like everyone, we received Pravda (Truth) and Izvestiya (News), two central sources of agitprop coming to us from Moscow, the nation’s capital. We supplemented those with a daily local called Znamya Kommunisma (Banner of Communism). They were all skinny, two to four thin folios covered in newsprint and black-and-white photos beneath ornate letters of the banner. I am guessing in Trumpworld the papers will shrink too—to a size commensurate with the leader’s attention span and reading level.

The banners of all Soviet papers were emblazoned with communist iconography, most frequently the troika of profiles of Marx, Engels, and Lenin, or, alternatively, with the hammer and sickle encircled by a wreath of wheat, the official emblem of the Soviet Union. In some, the ring of wheat was cinched at the base by the said hammer and sickle, and the entire complex circumscribed the noble profile of our ethical-selfless-immortal Father of the Revolution, Vladimir Ilyich Lenin. His prominent chin, covered by the iconic goatee, and the high promontory of his brow paralleled his gaze, squinting into the distance just so, as though focusing on something far into the future that none of us could possibly fathom. (Mr. Trump, take note; should the Republican Party continue to indulge your post-election tantrum, you too can be portrayed this way, far beyond your mortal life.)

The crisp black print conveyed the hope and the brightness of our shared communist future. The photos featured heroes of farming and industry who, as the captions and their unthreatening faces suggested, were ordinary comrades, just like you and me. The articles shouted overachievement and abundance: first man in space, then first woman, harvests, steel production, and so much else heretofore unimaginable to any human society. I know you may be finding all this freaky, my friends, but it’s okay: the past four years of self-congratulatory “bigger than ever before” pronouncements have splattered us into preparedness.

If I may be so bold as to make a recommendation to the Orange Oracle: perhaps his press should take cues from the abundant Soviet weekly Literaturnaya Gazeta rather than from the stingy Pravda. Its racy blue at the top of the front page added color to an otherwise bland Soviet newsscape, and its sixteen whole pages were packed not just with propaganda, but poems, an occasional serialized novel, and humor. Whether because of its illustrious founder, Russia’s foremost poet Alexander Pushkin, or because of its stellar pre- and post-Revolutionary history, somehow the paper enjoyed some lenience from the censors, provided it offered an acceptable dose of insipid hagiography in every issue. (Think of it this way, Mr. Trump, sir: You will need at least this many pages to convey your many accomplishments. Though I am certain that poetry and humor will have to yield their claims in order to pay sufficient homage to your enormous and unprecedented greatness.)

My dad would scan the news in the evenings, sitting in a worn black leather armchair by the bookcase, searching in vain for nuggets of candor. Sometimes he sipped his evening glass of kefir or chomped a green apple as he read. It didn't take him long to get through all three daily periodicals, and he would fold them back along their original seams, though they never got quite as flat as when first delivered; they would trap air in between the pages like a sandwich bag, just begging me to run to the desk and slap them. They sat like that, slightly unraveled, either on his desk or on the dining table, lingering into the lazy rays of the rising sun until it was time for their next use.

The same print that demeaned the decaying West and touted our achievements in the cosmos as on this planet wrapped our lunches. A soggy doktorskaya kolbasa (bologna) sandwich in coarse bread gave up some of its moisture in transport to school, leaving the paper damp and no good for immediate reuse. The sandwich, however, retained its taste: the butter soft and creamy, the meat smooth and slithery, the bread spongy, with crust that required some serious and satisfying effort.

When my mother stopped at the Novyi Bazaar on the way home from work, her haul (when she was lucky enough to have a haul) was clad in copy – a skinny fish with its head intact, eyes staring vacantly into space, a couple of pounds of beef bones for a broth, two potatoes and three carrots to turn the broth into soup. At the Sobornaya Ploshchad’ (Cathedral Square) in the center of the city, where Romani women sold flowers and an occasional packet of bubble gum while their children braided bracelets out of electrical wire, with yellow, red, blue and green strands entwined into a boxy cuff, toothless babushkas in floral kerchiefs sold roasted sunflower seeds and boiled prawns, ripping the newspapers into rectangles big enough to wrap around their fists into a funnel, and folding the tip to make a perfectly serviceable container for their goods. If a shoe store happened to have shoes in your size, give or take, in return for the few rubles handed to the clerk, you received the pair wrapped in yesterday's news. If you were lucky, it was the Literaturnaya Gazeta, which you could read while sitting on the toilet before using it as toilet tissue.

It’s true. We wiped ourselves with newspaper. We had heard rumors of toilet tissue. Some of us had even experienced it, while others, especially those who lived in Moscow, were treated to it regularly. The backwater of Odessa didn’t merit such inventory, and our asses weren’t too proud to rejoice at newsprint, especially pages as entertaining as the Literaturnaya Gazeta. Unfortunately, our ubornaya (bathroom) didn’t allow for much leisure. A cramped cell, whose foggy window looked into a well between buildings that made the sky seem eternally overcast, it was not conducive to contemplation or reading. It was too popular among the dwellers of our communal flat, all eighteen of us. At any given moment, there were multiple neighbors who required its services at the same time. Their loud rapping made it impossible to enjoy a brief solitary interlude with the literary news.

To make using the ubornaya efficient, the family on the weekly toilet duty was responsible, not only for cleaning the ancient discolored porcelain bowl traversed by webs of shallow cracks, but also for replenishing the neat stacks of newsprint on the windowsill. This was a chore my father undertook with glee, folding the papers, creasing them with his thumbnail before pulling the edges away from each other for a clean tear along the crease. They were the size of an 8 1/2 by 11 printer sheet folded in half, and, unlike so much else in our lives, the only limit to the number we were allowed to use was the capacity of the toilet to flush them. This was virtually the only luxury we enjoyed in the USSR, if you don't count the thrill of seeing excreta adorn the abundant eyebrows of our loose-dentured leader Leonid Ilyich Brezhnev, captured photographically in the middle of a vodka-infused speech at some indispensable Politburo meeting.

Even if Trump’s psychotic coup attempt fails, and our shelves once again strain under the abundance of paper products, it will still take a hell of a lot of paper towels and bleach to wipe the smear of trumpism off our nation. Yet he may still succeed, especially if we sit by and go along, and if our legacy press continues with its anodyne coverage of his attempted autocratic breakthrough. On the other hand, look at it this way: if he does succeed, at least you too may one day have the opportunity to experience the furtive frisson of wiping your ass with a demagogue’s vacant features.