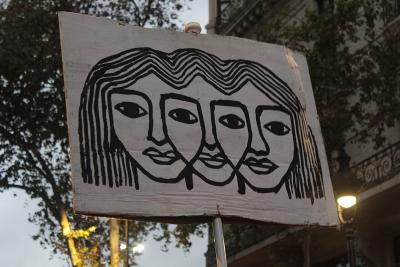 On the Intolerable in Dance

I recently saw Angelin Preljocaj’s Rite of Spring (2001) on film. This was the latest of many ballets staged by the French choreographer from the repertoire of the Ballets Russes. Earlier Preljocaj had offered the world his Le Spectre de la Rose, L’Oiseau de Feu, and Les Noces. Though considered a choreographer of contemporary dance, most dance critics agree that Preljocaj’s works are indebted to the tradition of classical ballet and to neoclassical techniques. In his inventive version of Rite of Spring, the choreography is structured in particular around the idea of a primitive energy related to sex and violence.

This is not an irrational reading of the theme of the ballet. Maurice Bejart’s version was in the same vein. However, Preljocaj includes scenes of rape which are cruel. In addition, the central rape scene, which involves all female and male dancers, is followed by a “reconciliation” scene between the aggressors and the victims; both scenes are prelude to the final rape and sacrifice of the Chosen One. I have to admit that watching all this was disturbing—at least for me. Not because the scenes contained explicit violence, but because the neoclassical technique employed somehow transformed a horrible act into “beautiful” choreography. The male bodies subjugated women through formal movements that harmoniously followed the cadence of the music with perfect technique. The beauty of the movements felt like an invitation to “enjoy” the dance, which was truly unpleasant.

It surprised me that this work—originally premiered in 2001—didn’t arouse any criticism at the time. I’ve found only one text, from 2013, which analyzes versions of the ballet by Maurice Béjart and Angelin Preljocaj; it is published in the feminist blog “Laios & Terpsichore,” and its title is “La culture du viol dans la danse – Le Sacre du printemps” [The culture of rape in dance – The Rite of Spring]. The author writes, “I have nothing against erotic scenes in contemporary dance, [but] to talk about sex through a history of violence shows that these choreographers did not understand what rape is. Rape is a relation of domination, not unbridled sex.”[1] The author’s statement seems well founded, yet it is surprising to find that it was published more than a decade after the premiere. One hopes this essay demonstrates that something has changed in the last ten years. I, for one, would like to think that, thanks to the global feminist movement, some artistic practices related to violence against women have become intolerable for a significant part of the audience and for the artists themselves.

The concept of the intolerable refers to a specific moral configuration that emerges when the transgression of a limit becomes impossible to assimilate[2]. In dance, this impossibility is understood and felt as part of the sphere of perception itself involving both body and mind. When something becomes intolerable, we can feel it in our bodies, even if the impression is not already clear to our minds. Given that all human affect is the product of historical and social conditions, the content of what is considered intolerable varies accordingly. What is found intolerable today may not be in the future and, vice versa, what was tolerated in the past today may not be. As such, the concept ultimately designates a terrain of dispute, an arena in which different factions struggle to impose their limits.

There is, moreover, another issue: the reality of violence against women in the field of dance. This is a problem of the micropolitics of dance and the power relation often established between male choreographers and female performers. In Argentina, violence against women has become a central issue, especially after the rise in 2015 of the “Ni una menos” [Not one (woman) less] campaign. This feminist movement has grown significantly in recent years, and today it constitutes one of the most powerful and active political groups in the region. Most of Argentinian female contemporary dancers in Buenos Aires belong to this movement, though not all translate their feminist ideology into militant artistic practices.

For instance, we could turn to La Wagner, a contemporary dance staged by the Argentinian male choreographer Pablo Rotemberg from 2013. I saw the piece in Buenos Aires a few years ago, and it is still running. The subject of the work—performed by four naked female dancers—is sex, violence, and abuse. It includes a rape scene where two female dancers mimic forced penetration of a third. When describing this rape scene, the Argentinian dance critic Pablo Gungolo proposed an analysis that contributes to the understanding of its underlying power relations[3]. He wrote that, as the female performers penetrate the female victim with an absent phallus, their masculine movements increase the level of violence, as if by not being there the phallus had become omnipresent. I would simply add that what becomes omnipresent is the phallus of the choreographer.

Patriarchy, at least in the contemporary dance of Buenos Aires, is not only expressed in the aestheticized representation of violence against women, it is also recognizable in male choreographers’ demand for complete devotion from female performers. Such a practice may lead the women to suffer from injuries or to feel compelled to satisfy any artistic request, even when they feel uncomfortable doing it. It is impossible for me to speak for the performers of La Wagner, to affirm that they feel uncomfortable playing their characters. Perhaps they like to perform this work on stage; I do not know. Regardless of any particular case, however, in dance practice the degree of perception of violence by the one who is suffering from it may itself be part of the problem, as paradoxical as this may seem.

So what should we do? Is simply naming such practices as intolerable enough? How might it be possible to advocate that something should become intolerable for another people who may not share our values or our political commitment? As I wrote earlier, the concept of the intolerable designates a field of dispute that belongs to the sphere of perception, one which is not necessarily or exclusively based on rational debate. Our political task—as critics, artists, or researchers—is to speak and to write about such issues. We must do so, not only to make the dance world aware of the inequalities and the violence associated with male dominance, but also to make them sensible to the suffering.

JUAN IGNACIO VALLEJOS is a research fellow at the National Scientific and Technical Research Council in Argentina. He is the author of a number of articles and essays on the history, dramaturgy, and political theory of dance.

For other essays in this series:

Tanya Jayani Fernando, "Introduction: The Classic and the Offending Classic"

Juan Ignacio Vallejos, "On the Intolerable in Dance"

Joellen A. Meglin, "Against Orthodoxies"