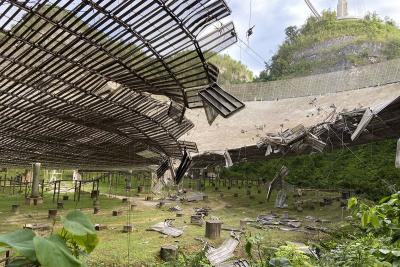 the soul, after all
doesn’t exist by itself
it needs to take the form
of the things it inhabits…
-Elidio La Torre Lagares, from Arecibo Observatory

On December 1st, I woke up to the news that the radio telescope at the Arecibo Observatory had collapsed. A cable holding the main platform in place snapped, sending the structure crashing down early in the morning. The news was first shared by local meteorologist Deborah Martorell and would soon spread like wildfire on local and international news outlets. The vast majority of my friends as well as public figures expressed sadness, frustration, and pain on social media. Confronted with this sudden outpouring of emotions, I suddenly found myself feeling an amalgam of these same feelings and more. This, in turn, led me to ask myself a particular sequence of questions over and over again: Why mourn for an inert object? Why mourn for something I rarely visited? Why mourn for something that rarely crossed my mind throughout all these years? In sum, why mourn? Truth is, it wasn’t just an inert object we were mourning. It was so much more.

We invest objects with our dreams, our desires, our hopes, our fears, our doubts, our curiosity, our humanity, our selves. I had just gotten a reminder of this the week prior to the collapse, when I visited Aruba for the first time in two decades. While there I was reminded of how the locals pride themselves on their island, their food, and the attractions that draw in many a tourist. One such attraction – in fact one could argue the preeminent attraction – was the Natural Bridge. I say was because the Natural Bridge is no more, having collapsed in the early hours of September 2, 2005. Many in Aruba mourned the loss of their beloved bridge for many reasons, the most salient being that it was a natural wonder, their natural wonder, and that, consequently, it represented a draw which brought in much needed visitors for an economy that depends on tourism. Fifteen years later, Arubans are still mourning that collapse. In fact, most attraction maps still include the site as a place to visit and the Visitors Center remains open, for those now interested in seeing the ruins of the bridge, along with the smaller bridge which remains intact.

For many Puerto Ricans, the telescope at the Observatory represents a similar artifact, perhaps topped only by El Yunque Rainforest, El Morro, and the Camuy Cave System. Certainly, it was a tourist draw, with many including a stop there during their visits. But the telescope and the observatory meant much more than just that. While perhaps better known for its ties to the search for extraterrestrial life, the telescope was key to the undertaking of many studies in the fields of astronomy and atmospheric science. Over the years, countless scientists, professors, and students from Puerto Rico and abroad conducted research there. The telescope became a beacon of hopes and dreams. Consequently, for the Puerto Rican imaginary, the telescope became a source of pride, making our tiny island the center stage for all the work taking place there.

Personally, the telescope represented many things. For a kid growing up in Puerto Rico, it was the stuff of sci-fi. I was an avid Star Wars fan, and seeing the telescope in textbooks evoked the wondrous realms of the future – something on par with NASA’s space shuttle program. When I visited it for the first time as a young adult, the telescope continued to elicit awe. Being there, hearing the breeze that was characteristic of that plot of land, gazing over the ledge into the precipice, witnessing the scale of the structure itself is, to me still, an indescribable feeling. The telescope’s aura and legend would grow with each passing day, aided by its appearances as a set piece in films and television shows like Goldeneye, Contact, and of course, The X Files. The telescope became larger than life, something too big to fail. However, my awe would give way over the years, transforming into a different type of relationship with the structure.

As I’ve written in a previous MR blog post, Puerto Rico is in the midst of a crisis that continues to snowball. The island’s ongoing colonial status as a US territory bearing the brunt of neoliberalism and neocolonialism, compounded with mismanagement and corruption on the part of the local government, have made for a truly disastrous combination. It is necessary to lay out the sequence of events, even if at a glance. First, following years of rampant development and investment in a bullish economy, the Clinton Administration eliminated the tax subsidies which made Puerto Rico an attractive economic destination for US companies operating on the island. Most companies then fled the island and set up shop in new tax havens, or simply returned to the US mainland. Trying to prevent a free fall, the Puerto Rico government issued government-backed bonds. Government spending kept ballooning after that. By 2014, Moody’s and other credit-rating agencies declared these bonds junk. After that, everything moved at an increasingly fast pace.

Pressured by investors, the Obama Administration would, in 2016, impose a board, colloquially known as PROMESA, to oversee the rollout of austerity measures intent on safeguarding the reduction of government spending, among other directives set in place, in order to guarantee the eventual return of investments to bondholders. These austerity measures plunged Puerto Rico into a deep depression.[1] Then on September 20th, 2017, approximately a year after the onslaught of PROMESA began, Puerto Rico was hit by Hurricane María, a category 4 hurricane, mere weeks after the island had had a close encounter with Hurricane Irma. The Trump Administration’s lack of response following this catastrophic event has by now been well documented. The island’s infrastructure suffered widespread damage, which lingers to this day. Ricardo Roselló, then governor of Puerto Rico, would eventually be forced by the people of Puerto Rico to resign, due to his administration’s mishandling of both the economic crisis and the aftermath of Hurricane María.[2] Adding insult to insult, injury to injury, Puerto Rico was battered by a swarm of earthquakes starting in December 2019 and continuing well into May of 2020.

Following this cluster of natural and man-made disasters, the telescope and observatory must be seen in a different light. Funding to the telescope itself began dwindling in 2006, the same year that the Clinton Administration’s ten-year phase-out of tax subsidies for the island ended. By 2011, Cornell University was no longer affiliated with the project. Funding would continue to plummet and by the time Hurricane Maria hit, lack of upkeep and the hurricane itself proved too much to endure. Thus, the telescope has become, to my eyes at least, a symbol of Puerto Rico’s neoliberal and neocolonial status. The telescope is now the detritus of empire, and I would venture to say that most Puerto Ricans saw this coming, even if they do not admit to it.

This former symbol of hope now makes perfectly visible the effects of empire. At its height, the observatory drew in monetary investment, intellectual development, scientific research, and star power. At its height, the telescope spawned imagination, the search for some type of undisputed truth, hope and vision. But as has occurred all too often, the empire has moved on to other ventures, to other opportunities for exploitation, other locales to mine. And we are left to sift through the wreckage, trying to reclaim an iota of everything we invested in it: our dreams, our desires, our hopes, our fears, our doubts, our curiosity, our humanity, our selves.

That is why I mourn. I mourn hope. I mourn what was and what could have been. I mourn for dreams: mine, others, and those of a generation, my daughter’s, who will never be given the chance to imagine the possibilities the observatory once contained. I mourn the fall of one of the few symbols of collective pride and hope that remained to us. The collapse reopens wounds of greater weight than the weight of the object itself. I mourn in remembrance of the 4,645.[3] I mourn those who weren’t counted. And I mourn for so much more that can’t be put into words.

What can Puerto Ricans do in the face of such calamity? Many have already shown the way. For some time now, but even more so since María, many have taken upon themselves the task of building community. Autogestión projects have tapped into the skills and expertise the locals can offer in an effort to break the chain of dependency on government and empire.[4] From the rubble, people have sprung into action. Thus, Puerto Ricans have begun to hope and dream anew, but from the inside. The telescope’s collapse may offer the chance to reflect further on the effects of neoliberalism and neocolonialism and how we can counter this legacy. My hope is that “Of that colossal Wreck, boundless and bare / The lone and level sands” do not “stretch far away.” I dream instead that they will offer new ways to rethink our connection to science, and that we will reinvest in a future we can all envision, collectively.

Author's Note: Thanks to Eugene Speakes and Katia Delgado for their insight during the writing of this obituary

DANIEL NEVÁREZ ARAÚJO is an independent scholar who holds a PhD in Comparative Literature from UMass Amherst. He has published work on a multitude of topics including disability studies, HIV/AIDS, documentary films, migration, and heavy metal music. His most recent publication is Heavy Metal Music in Latin America: Perspectives from the Distorted South, co-edited with Nelson Varas-Díaz and Eliut Rivera-Segarra, and published through Lexington Books.

[1]For an in-depth analysis of PROMESA and the sequence of events that led to its imposition, see Villanueva, et. al. San Juan, the Fragile City: Finance Capital, Class, and the Making of Puerto Rico’s Economic Crisis. Antipode: A Radical Journal of Geography; Vol. 0 No. 0, 2018, pp. 1–23.

[2]Another factor was the publication of chat and text messages between Roselló and members of his cabinet, communications in which he mocked everyone from hurricane victims to public figures and politicians.

[3]This figure represents the conservatively estimated number of deaths occurring as a result of Hurricane María. A team of researchers funded by the Harvard T.H. Chan School of Public Health published their findings in The New England Journal of Medicine in July 12, 2018. Prior to this report, the Puerto Rican government insisted that the number of death had been 64. Most Puerto Ricans has latched on to the Harvard tally and have used the number in their ongoing demands for justice. The report can be found at: https://www.nejm.org/doi/full/10.1056/NEJMsa1803972.