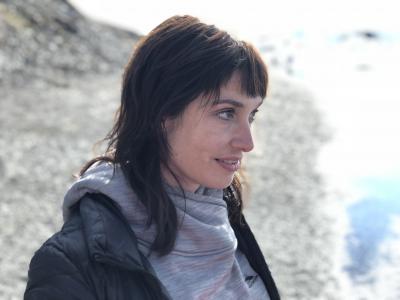 In the end days, eyes
turn around,     softened

Tell us about one of the first pieces you wrote.
At first, my poems were basically a catalog of thoughts or lists (lists of lists) tapped into the notes app on my phone: 12 vultures, 3 crows, the dog’s impossibly coiled tail. The first piece I wrote for publication was in response to a call from Northern New England Review with the theme of “True North.” The dog’s impossibly coiled tail became “Verses for a Double Murder,” the first in a series of prose poems based on family lore, superstition, & my childhood in northern Maine. My poems still follow a chain of rivers, lakes, & pines from a town in central Maine up to the unincorporated territories near the Canadian border.

What writer(s) or works have influenced the way you write now?
Louise Erdrich slays me Every. Single. Time. I read Tracks in college & never fully recovered.

What other professions have you worked in?
My background is in book arts & printmaking. I have been a working visual artist for over two decades. I spent 14 years as an antiquarian book restorer. What did you want to be when you were young? I wanted to ride diving horses.

What inspired you to write this piece?
I was very close to my paternal grandmother who, until she passed away last winter at 99, was a tribal elder of the Listiguj Mi’gmaq First Nation in Canada. She moved to Maine at 21 & until the 1970s, wasn’t allowed to acknowledge her culture or to speak “Indian.” But at the very end, all of her English slipped away & she only spoke Mi’gmaq. I wrote this poem after my last visit with her.

Is there any specific music that aids you through the writing or editing process?
I am easily distracted & sound sometimes comes across as image to me, so while music helps to provide focus & inspiration for my visual practice, I prefer to write in silence—wind, water, & birds excepted.

Do you have any rituals or traditions that you do in order to write?
I keep a notebook by the bed & write down whatever I’m thinking if I wake up in the night, which leads to such gems as, not the ordinary lewdness of post-holiday pine-scented. I try to steal the hour between when my son starts school & the dog needs her first walk to climb back under the covers with my coffee. I love the hushed first sips of morning. I start by peeking in my notebook & typing any random garbled nonsense leftover from sleep into a document called “Morning Words” which inevitably leads me down an internet rabbit hole after an obscure animal fact or turn of the century logging term. At the end of the day, I curl up on the couch or in my studio, open “Morning Words,” skim it for anything that feels like a prompt, & go from there.

Who typically gets the first read of your work?
It depends on the poem. I am so grateful to be part of a weekly poetry group where we workshop each other’s drafts. I have a couple of dear friends who regularly receive a Random Poetry Dispatch™ & my partner is a patient & excellent first reader.

If you could work in another art form what would it be?
I would love to learn how to play an instrument.

What are you working on currently?
I am writing my first full-length poetry collection, Boomhouse, which will come out from The 3rd Thing Press in 2022. I am also working on a series of hand-cut paper wall hangings, chandeliers, & light boxes.

SUMMER J. HART is an interdisciplinary artist from Maine, living in the Hudson Valley, New York. Her written and visual narratives are influenced by folklore, superstition, divination, and forgotten territories reclaimed by nature. She is the author of the microchapbook Augury of Ash (Post Ghost Press, 2020). Her poetry appears in Waxwing, Northern New England Review, Third Point Press, and elsewhere. She is a member of the Listuguj Mi’gmaq First Nation.